Should teachers use collective punishment?

Should teachers use collective punishment?

Alright, that’s it. You guys can’t handle this activity, we’re shutting it down right now. Everybody, clean up. It’s over.”

Chances are, you’ve spoken words like that to your students at some point. You’ve given way too many warnings for the kids to get on task, quiet down, and/or get to work, and the classroom is still too chaotic. There are lots of students who aren’t following the rules, and rather than try to single out which 10 or 15 it is, you issue a consequence to the whole class. Everyone loses the privilege, and everyone suffers the consequences of the bad decisions made by part of the group.

Whole class or collective punishment is despised by students, who inevitably whine, “It’s not faaaaair!” Why should the students who were doing the right thing be punished because other students were not?

I used a lot of whole class consequences as a new teacher because they were the easiest way for me to handle misbehavior. When I was crunched for time and totally overwhelmed, it was so much simpler to just issue a mass consequence for everyone than to try to sort out who was actually in the wrong and address the root of the problem. 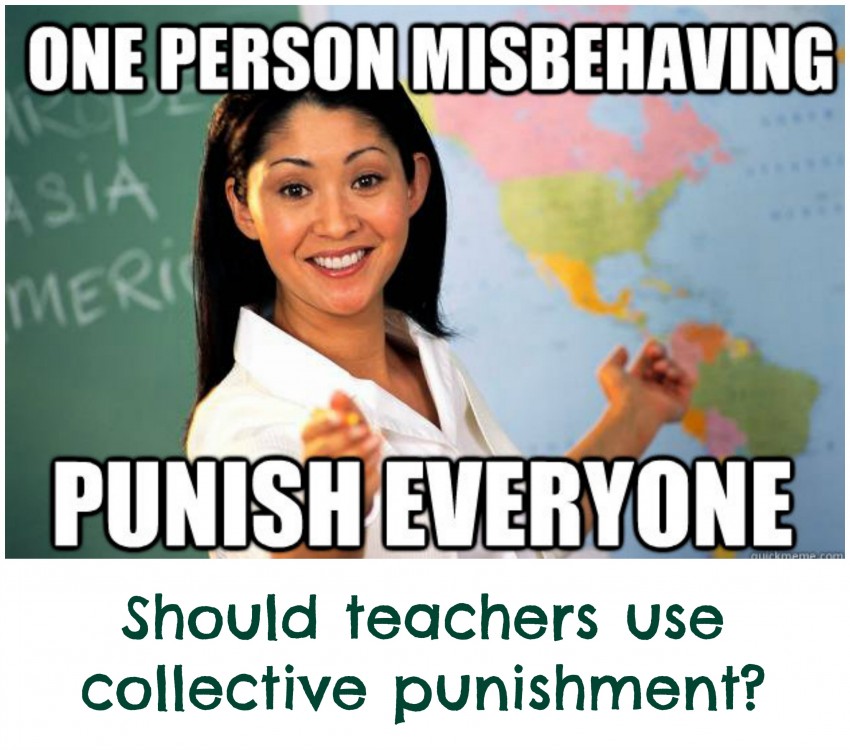 Over the years, I started noticing just how devastating group punishments can be to the type of child who wants to please and is determined to follow the rules. I can think of at least one child in every class who cried when recess or a field trip or even just center time was taken away because his or her classmates were disruptive. At the time, I was so focused on stopping the misbehaviors that I just didn’t have the energy to give much thought to the kids who were doing the right thing. I felt bad for them, sure, but on a practical level, what exactly was I supposed to do when I had 10 minutes to ensure every student had mastered a skill and half the class seemed determined to thwart any type of learning?

It was the parent of a sweet little eight-year-old named Morgan who finally made me re-examine my practices. I adored both Morgan and her mother, and we had established a great rapport during the first few weeks of the school year. One morning in September, the mom called me and said Morgan couldn’t sleep the night before. I had taken away a privilege from the entire class (I wish I could remember now what it was) and Morgan was convinced I was mad at her. She was terrified to face me that day in school and couldn’t figure out what she had done wrong. Her mom told me, “I kept insisting to her that she must have broken a rule somehow, that she wouldn’t have lost the privilege if she’d done nothing wrong. I asked her over and over was she SURE she had done what you’d asked, and she was sobbing, saying she knew she had. She laid awake all night long trying to figure out what she’d done wrong.”

I was sitting at my desk during that phone call, totally stressed out and surrounded by stacks of papers that needed to be graded, lessons that needed to be written, and projects that needed to be organized. But everything fell away at that moment and my heart broke a little bit for Morgan. Clearly I hadn’t done a great job communicating to her and the rest of the class why the privilege was taken away. I hadn’t talked about how the whole class needs to work as a team, and when part of the group falters, sometimes they all have to suffer the consequences. Instead, I’d left Morgan–and undoubtedly a few others–wondering how they contributed to the problem and why they deserved to miss out on something fun.

I can’t say I completely stopped using whole class consequences after that day. But you better believe I thought twice before doing it again. I worked a lot harder at building a sense of classroom community and teaching students about the effects their choices had on their classmates. I also made sure I clearly spelled out consequences in advance (“If I have to stop the activity 3 times because it’s too noisy in here, we will all need to clean up early”) instead of blindsiding students by applying a consequence out of anger.

I never came up with an approach to collective punishment that I felt completely comfortable with. And so I thought I’d bring up the topic here. Do you use group punishments with your class? How do you apply consequences or take away privileges in a way that’s manageable for you but fair to all your students?

EDITED FEBRUARY 2020: This article is 7 years old and discussions are no longer being monitored. The comment section is closed.