This is the time of year when we tend to be especially short-tempered with our “frequent fliers”, as a principal of mine used to call those kids who seem to spend more time traveling down to her office than in the classroom. I wrote a post last week called Why discipline is different from punishment and explained my perspective that punishment makes a child suffer for wrongdoing, whereas discipline helps a child solve a problem. Strong and effective discipline figures out the root of the problem, and applies consequences in a way that addresses that root problem, not just the effects of the problem (the chaos of misbehavior in the classroom.)

I gave an example of a child named James who gets physically aggressive with other students or even teachers. James gets into an argument over something silly in the classroom and shoves another student. (Repeat 15 times a day–so often that if you attempted to suspend him each time it happened, James would probably spend about three minutes a week in your classroom.) 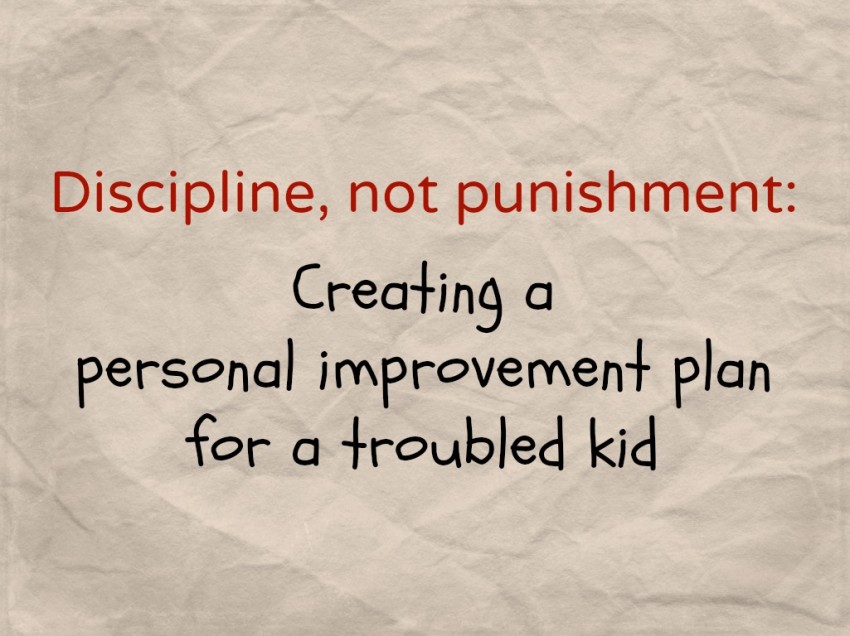 Here’s how I respond to “frequent fliers” like James in the elementary grades. The first thing I do when I realize that I’ve got an ongoing, larger problem that isn’t solved by my normal classroom management approaches is create a Personal Improvement Plan, which is a term I prefer to the more traditional Individual Behavior Plan, despite its unfortunate acronym, PIP.  (I just refer to it as “our plan” most of the time when talking with the child.) I like that term because the plan’s purpose is focused more on helping the child become a better person than on modifying his behavior. It’s designed to help the child reflect on her actions and connect them to logical consequences (and motivating rewards if needed).

The plan is typically a contract or evaluation that is created in conjunction with the child and parent, but if the parent’s not involved, I’ve created plans with just the child. You can read more about how these personal improvement plans work (and download free editable examples of plans I’ve used with my students) on the Behavior Plans and Charts page of this site. I’ve also written an entire chapter on personal improvement plans in my book, The Cornerstone: Classroom Management That Makes Teaching More Effective, Efficient, and Enjoyable and have a 45 minute session on meeting individual student needs in The Cornerstone webinar.

Once the personal improvement plan is in place, I no longer have to make swift judgments about consequences the moment I see misbehavior. The student and I are already in agreement about what will happen when rules are broken, so kids like James are less likely to get angry and lash out at me when they make poor choices, and I’m less likely to say or do something I’ll regret.

When I see an incident, I typically address the other child immediately, giving him or her attention instead of the child who is acting out. I might say, “Thomas, are you okay? Thank you for not hitting him back, you made a good choice. Would you like to sit somewhere else in our classroom where you feel safe? Go ahead, move your chair near your friend. Back to work, everyone, I’ll take care of the situation.”

In this way, I haven’t responded to James out of anger or given him any attention for his behavior. I’m not arguing with him or escalating the situation, I’m just making sure the child he hit is safe and I’m getting the class back on task. James will most likely be pouting, mumbling under his breath, kicking his desk leg, etc. If the behaviors aren’t too disruptive, I’m going to ignore them for 30-60 seconds and let James calm down. If it’s a bigger problem, I’ll skip the wait time and motion James and the other child over to my desk or a quiet spot in the room.

I keep my facial expression solemn and voice tone neutral and say, “Tell me what happened.” I let each child speak, uninterrupted, to tell their version of what happened. I mostly respond with questions so that the kids are the ones doing the thinking. “Was that a good choice? What else could you have done?” As we wrap up the conversation, the tone of my voices expresses disappointment rather than anger, and I say, “We agreed on a plan to help you make good choices. What needs to happen now, according to the plan?” James will mumble whatever the agreed-upon consequence is, and I’ll nod solemnly. If the other child also needs a consequence, we discuss that, as well.

Since the kids who have personal improvement plans often exhibit misbehavior multiple times in a single day, I don’t have that conversation every time. Often I simply make eye contact with the child and say, “We have a plan for handling this, right?” and the child will nod. That way I know that James (and the rest of the class) understands there will be a consequence, but I’m not making the situation worse by embarrassing or correcting him in front of others.

Kids like James sometimes show a significant turn-around over the course of several weeks or months when they have a support system like this in place. Eventually they can even be weaned off of the plan. Other kids don’t seem to make a lot of progress and need the plan in place all year long, simply because the 25 hours a week they spend in my classroom really aren’t enough to correct deep-seated issues and undo the damage that’s created in the other 143 hours.

I don’t judge the success of the plan on whether it stops the disruptive behavior altogether: let’s face it, there’s no plan in the world that can do that for certain kids. I’ve learned to accept that dealing with misbehavior is part of the daily work of a teacher. So is helping kids learn how to make smart decisions, problem solve, and self-regulate. Socio-emotional skills might not be on a standardized test, but they’re some of the most important things we can help kids learn, and we can choose to embrace that fact instead of resenting kids for needing guidance in the area of self-control.

So instead, I judge the plan’s success on whether it allows me to help the child without derailing my primary purpose in the classroom: to teach. If the plan lessens the power of a single child to disrupt the entire learning environment, it’s worth doing. I’ve found that creating personal improvement plans prevents me from getting so angry and frustrated with my “frequent fliers”, and helps me to respond to their misbehavior in ways that address the root cause of the issue with minimal disruption to the rest of class’ learning.

Have you tried personal improvement plans or individual behavior plans with your students? What works (and what doesn’t), in your experience?

6 ways to prevent your students from misbehaving for other teachers