Home Articles Why discipline is different from punishment 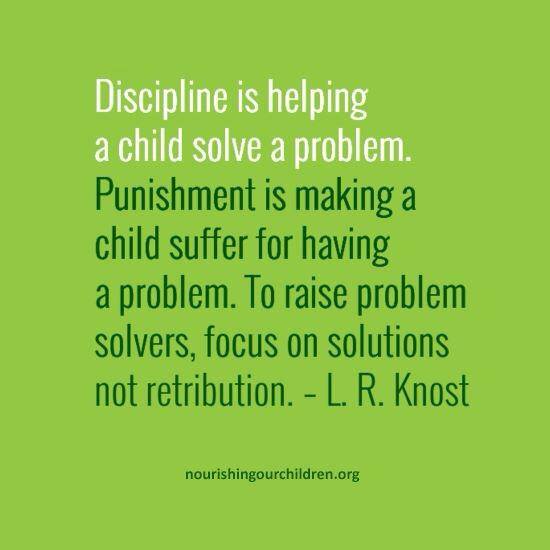 I shared this image recently on Facebook and was really surprised by the amount of pushback it received.

There were a number of teachers who felt that punishment is the only thing that works at times, especially for students in high-poverty classrooms. Some commenters interpreted the quote to mean that positive reinforcement should be used instead of punishment, and decried the lack of consequences that students receive in the name of politically correct behavior management.

Here’s my take on it. I think this quote explains the difference between discipline and punishment very accurately and clarified the terms in a new way. The very first sentence refers to *discipline*…it doesn’t suggest that students’ poor choices shouldn’t have consequences or that positive reinforcement should be used instead. The point is to approach discipline with the intent of helping the child improve rather than making him or her suffer. We have all punished kids out of anger or frustration, and it doesn’t help anyone. The quote is a reminder to think of the end goal of discipline: to produce children who can solve their own problems and make their own good choices.

Let’s say you have a student named James who gets physically aggressive with other students or even teachers. James gets into an argument over something silly in the classroom and shoves another student. (Repeat 15 times a day–so often that if you attempted to suspend him each time it happened, James would probably spend about three minutes a week in your classroom.)

You see the incident happen, and you feel your blood pressure rising. You’re furious at James for interrupting a learning activity, hurting an innocent child, and creating havoc yet again when you have so many other issues to attend to. And so your knee-jerk reaction might be to punish James. Get out, go to the office! or Go move your desk to the corner, you’re sitting alone until you figure out how to treat other people! or That’s it, you’ve lost your recess! I’m so tired of this!

Can we get really honest and a bit introspective about those punishments? Can we admit they’re given out of anger and frustration, and they’re designed to make James suffer for what he did? Punishment is an act of retribution: it says, You mess with me and my classroom rules, and I will get you. Punishment does not show the child how to make better choices or in any way reform him.

Punishment involves consequences that we hope the child will dislike enough to stop the behavior. But since most chronic misbehavior is deeply ingrained and somehow meets the child’s needs (for power, etc.), it’s highly unlikely that any punishment will ever be enough to stop the child from acting out again. We try every punishment we can think of, making each one more severe than the previous and can’t understand why nothing’s working. We don’t realize that until the child is comfortable with an alternative way of behaving, the misbehavior will continue.

So what would discipline look like? It doesn’t necessarily mean positive reinforcement. That’s a method that has been over-emphasized in recent years, in my opinion, and it’s not the solution for every problem. I’m not suggesting you say, “Okay, James, each time you go five minutes without hitting another student, I’m going to give you a piece of chocolate! Would that be alright with you?”

Discipline is going to involve consequences. James does not get to hit other students and get off scot-free. However, the discipline will not be given out of anger, it will be determined based on what is going to help solve James’ problem. Any kid who’s getting violent on a daily basis obviously has some problems he’s dealing with: maybe his family or community taught him to defend himself physically, maybe he’s feeling bullied in the classroom (you’d be surprised how many bullies perceive themselves as victims), maybe he’s so far behind the other kids academically that he feels stupid and lashes out at them every time they realize he doesn’t have a clue what’s he’s supposed to be doing.

Strong and effective discipline figures out the root of the problem, and applies consequences in a way that addresses that root problem, not just the effects of the problem (the chaos of misbehavior in the classroom.)

Discipline is also designed to help the student understand what he or she has done, why it’s not okay, and what other choices are viable. In our example above, James needs to learn how to solve his problems effectively. His go-to solution is striking anyone within arm’s distance when he’s mad, and he’s dependent on you as the teacher to prevent that from happening. This is not sustainable. James has got to learn how to control himself and express his frustration differently, or else this is going to keep happening over and over and over again.

In my next post, I’ll share how discipline vs. punishment could play out practically in the classroom, and explain what I would say and do with a student like James. There’s no guarantee that my suggestions or any discipline will work. There’s certainly no guarantee that punishment will work, either. But discipline helps to produce the kind of child who can problem solve. It’s an approach that builds rapport instead of a wall between you and the child. Discipline addresses the heart of the child’s issues and helps to create long-term solutions.

How do you approach discipline in your classroom?

6 ways to prevent your students from misbehaving for other teachers