I think one of the most annoying things elementary-aged students do is complain about each other. Especially in the primary grades, students may tattle-tell dozens of times each day…and many of those instances occur during instruction, interrupting the flow of the lesson and interfering with learning.

This is a developmental issue, and there’s no quick-fix answer. You’ve probably heard the old adage for helping kids discern whether or not going to a teacher with a problem is necessary: Tattling is when you’re trying to get someone in trouble. Telling is when you’re trying to help someone. This is a worthwhile explanation that can be modeled and practiced with kids. But I’ve found that little ones aren’t very good at examining their own motives, especially when in the emotional throes of an unjust situation. And more importantly, I dislike having the teacher serve the central role in a problem’s resolution.

What if a different type of classroom community was created, one in which students were shown how to help each other instead of how to tell a teacher to help? The following thoughts on the subject are excerpted from my book, The Cornerstone: Classroom Management That Makes Teaching More Effective, Efficient, and Enjoyable:

When children know how to effectively problem solve on their own, they won’t become frustrated and resort to telling the teacher. Sometimes it seems as though children could handle a situation independently, but tell on each other for the enjoyment of getting a peer in trouble. However, students often tattle because they are unsure about which situations concern them and which don’t. One minute teachers say, “Don’t just sit there, help her pick those crayons up!” and the next we say, “Do your work and let her take care of herself!” We say, “You knew he was writing those rude things on the cover of that book and you didn’t do anything?!” and then an hour later snap, “Worry about yourself—that doesn’t concern you!” 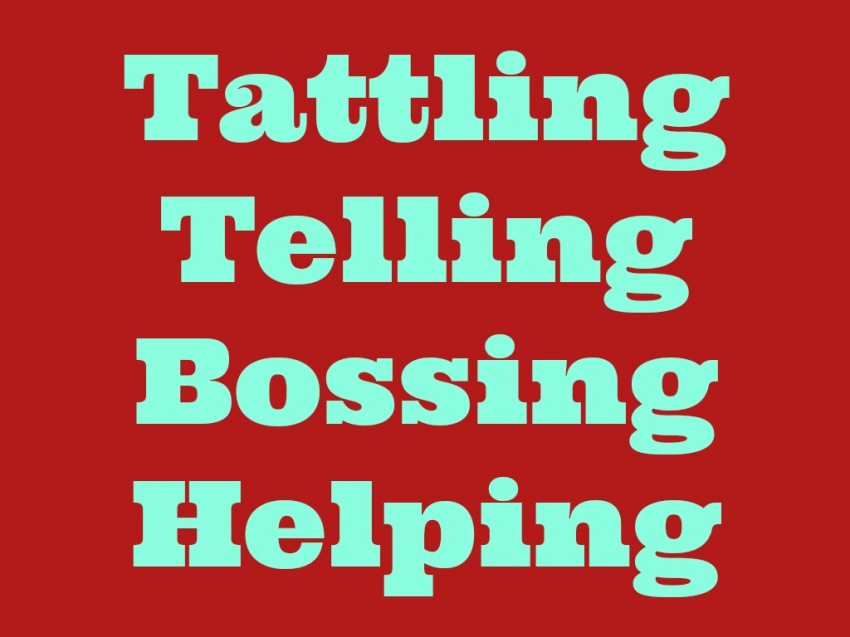 We must have clear expectations about how we want children to respond to rule and procedural infractions. I teach my kids to tell the person who’s breaking the rule BEFORE they tell me. For example, if a student says, “Jason’s on a game website instead of using the reading software,” I reply, “Did you tell him that’s against the rules?” If the child says no, I say, “Okay, go tell him. I’ll watch.” This almost always resolves the situation because the offending child is aware that I’m looking and responds appropriately. If the tattler says yes, she did tell the offender, then I say, “Okay, you’ve handled it the right way! Thank you!” and that’s the end of it. Sometimes the tattler will insist that the offender didn’t listen to her, so I say, “Go tell him again, and this time I’ll watch.” If that doesn’t resolve the situation, I call the offender over myself and talk with him.

Teaching kids how to respond to one another’s corrections is also important. Children have a tendency to say things like, “Leave me alone” or “Mind your own business” if the teacher has sent mixed messages about listening to peers. I decided several years ago that I would send a consistent message to my students that they are in fact responsible for one another, because that’s the type of classroom community I want to create. “Worry about yourself” is a phrase that I try very hard not to use, and I expect the kids not to say those types of things, either. Instead, we talk about the difference between being bossy and being helpful:

“When someone is trying to be helpful and remind you about a class rule, you need to say, ‘Okay’ or ‘Thanks.’ You should not get mad or argue with someone who tells you not to push in line, or that you shouldn’t be playing with a toy in your desk. Your friend is being helpful, because everyone in our room is responsible for following the rules. Remember: when you make good decisions and follow the rules, people won’t HAVE to tell you what to do, so if you want to be left alone, then do the right thing! If someone is trying to be bossy and tell you what THEY want you to do, then you need to say, ‘That’s not helpful’. The person should stop bothering you right away, and if they don’t, you can let me know.

“If you have a problem with someone not listening to you, you can tell me. I will watch you go back and talk to that person. If that doesn’t work, I will facilitate your problem solving. But you need to talk to each other before you talk to me.”

If you teach students how to help one another without being bossy, and how to respond appropriately when another child reminds them of a rule or tries to do social problem solving, you will encounter far less incidents of tattle-telling and see major breakthroughs in the level of self-sufficiency demonstrated in your classroom.

I just had this conversation with my new class a few days ago and had them do some role-playing (which they enjoyed almost too much: I think we’re going to have to incorporate some Reader’s Theater and other acting into the curriculum this year!). It really works in my classroom. How about you–what’s your response to tattling? How do you help your students solve their problems independently?