I’ve always wanted to get the student desks out of my classroom, and I finally took the plunge this year and had them all replaced with tables. (Clearly, this furnishing decision made me a favorite with our custodial staff.)

So far? I’m loving it, which is a surprise, because I never liked having my students’ desks facing each other. The kids just talked constantly and were always distracting each other. I felt like I was setting them up for failure: putting 6 other kids right in their faces, and then begging them all day to turn their heads and look at me. It’s okay after March, when the FCAT is over and the kids are doing lots of cooperative work and projects, but until then, I really like everyone to be facing moi.

Somehow it’s a little different with tables. There’s no place for the kids to hide stuff, and nothing for them to play with while I’m teaching. Not having their own little areas also makes it harder for them to daydream or not follow along. Granted, I only have 20 kids in the class, which greatly reduces the talking temptation. But I would definitely call my experiment a success. 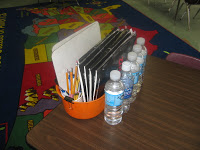 Here are the bins I keep on each table. (They were $1.50 at Target in August.) I have a small piece of velcro underneath to keep the kids from bumping the entire thing onto the floor. The bins hold pencils, erasers, dry erase markers, highlighters, dry erase boards, and felt squares to use as erasers for the boards. They also hold ‘works in progress’ folders for each child to organize papers commonly used or referenced on multiple days.

All workbooks and texts are stored either individual cubbies (I call children #1-10 to get their books, then #11-20 so there’s not a stampede)… 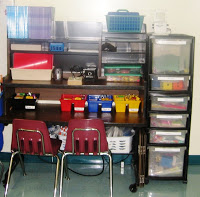 …and classroom supplies like scissors and crayons are stored at the Supply Station (here are similar ones from Walmart.) Each person at a table has a job, and one of those jobs is Container Helper (retrieving and returning the container of supplies).

Team jobs are determined according to which seat each child sit in. For example, the person at the head of the table is always the Trash Helper (to whom the kids give all their scraps after a project so that only 4 kids are going over the trash can). The person to the right of the Trash Helper is the Folder Helper, who retrieves and returns reading folders, writing folders, etc. from the Supply Station. The other two jobs are Paper Passer (to whom I give a stack of papers for the team to complete during a lesson, and that person makes sure everyone at the team has one) and Paper Collector (who collects the same papers after the lesson is over and makes sure everyone has a name on his/her paper and everything’s facing the right way). Read more about class jobs/helpers here.

Loving it! I’m really emphasizing team work this year (“If there’s someone at your table who is not yet on page 197, please show them”) and the kids are getting impressively good at helping each other out and working as a unit.

Anyone else use tables? Suggestions for making them work?