8 little words can invoke panic in the heart of almost any teacher: “You’re moving to a different grade next year.”

Changing grade levels is a big topic of conversation in June. In some schools, nothing’s been decided yet, so the rumors are flying and everyone’s unsettled. Other principals have already dropped the bomb: I’ve heard of one school in which a kindergarten teacher is being moved to 7th grade, which means the 7th grade teacher is being moved to 4th, so that teacher’s moving to 2nd, and the 2nd grade teacher’s going down to kindergarten.

Why the huge shuffle? Because one teacher is the weakest link, and the principal’s playing a game to make sure he inflicts the least amount of damage on students.

Situations like that infuriate me. It’s one thing when a drastic move is necessitated by budgetary reasons; for example, when a position must be cut due to decreased enrollment or funding. I can also understand moving a teacher into his of her field of expertise or preference. However, causing a chain reaction of switches for no reason other than to shuffle an incompetent teacher is a tragedy. 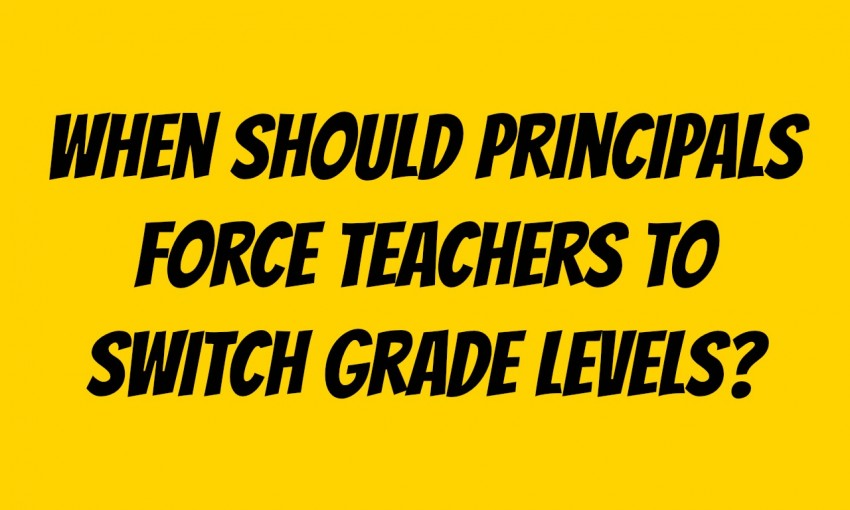 I’m amazed at how often this happens. Sometimes the principal is trying to run the teacher off or force early retirement (and it often works). But many times it’s a matter of placing ineffective educators in non-standardized-testing grades, as if children who don’t get scored by the state one particular year are of any less value or don’t deserve a top-quality education.

Another grade-switch reasoning that bothers me: This teacher’s been in the same grade for too long. He’s getting stale and stuck in a rut. I’ll move him up two grade levels and he’ll have no choice but to change with the times!

Wrong, wrong, wrong. He DOES have a choice: to get really angry, shut down, and try even less. He has the choice to take his frustration out on the kids and everyone around him. And chances are, if he’s the kind of teacher who refused to try new things in his former position, he’s not going to be too excited about learning to work a SmartBoard now that he has a whole new curriculum to figure out.

I’m not excusing the laziness and incompetence of certain teachers. I’m ascertaining that moving ineffective teachers to another grade level doesn’t fix the problem by itself, and it can make things worse for everyone else affected.

Most teachers have an increasingly limited amount of autonomy in their jobs, and I believe that choosing the age level or subject area they’d like to devote their career to teaching is a reasonable expectation. An unhappy teacher is never going to be as effective as a happy one, so shouldn’t a principal honor a teacher’s wishes whenever possible?

Not everyone agrees with me on this, I know. Whether you do depends on your feelings about a few fundamental questions:

We can all agree that the purpose of school should be to meet the needs of children, but teaching is a professional career choice. I don’t think anyone should be stuck teaching something they’re not passionate about.