FAQ about religion and public schools

FAQ about religion and public schools

Is it okay to use worksheets with dreidels on them?  What do I tell a student who asks about my religious jewelry?  The kids tease a Muslim student who covers her head–what do I say?  I have to teach the kids a science concept I disagree with–help! Many teachers wonder about their religious rights in the classroom, or have had a student ask a religious question they felt uncomfortable answering because they didn’t know the appropriate response.  If you can relate, this web page will help you navigate the murky waters of religious beliefs in the public school systems of America. 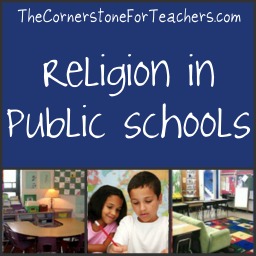 These are some common issues that most teachers in public schools face–whether they consider themselves religious or not.  Click on a question to follow the link to the source of my paraphrased answer.  All responses come directly from the U.S. Department of Education or from sites which quote the Department of Education specifically.

No–technically, religious decorations are not allowed in public school classrooms under federal law in the United States.  They may be used as teaching aids during lessons, but not displayed even seasonally as part of your decor.  The Christmas tree and Hanukah menorah have been declared ‘secularized’ by the Supreme Court, but have not been specifically sanctioned for display in the public school setting.  Be very careful with this (see the next question for guidelines about using holiday symbols in lessons).  Most teachers assume that as long as they represent all the major religions, it’s okay to display the symbols, but if a parent were ever to challenge them, there would be no legal backing.

Teach about, yes.  Celebrate, no.  You may display symbols of religious holidays as part of your lesson, provided you teach about multiple religious traditions and do not endorse any particular one. This can be difficult to do fairly and sensitively, especially when we have so much other content to teach as it is–that’s why so many teachers just tape some snowflakes up on the window and pretend like December is any other month.  (Those look ridiculous, by the way, when displayed on a window overlooking palm trees on an 80 degree day, so I never hung anything when I taught in Florida! )  Many schools circumvent this issue by ‘celebrating’ all the winter holidays, but technically, there is no current legal backing for that practice.

This is a gray area that is largely decided by individual states.  However, you can wear something discreet such as a necklace that indicates your faith.  Clothing is very rocky territory and not a good area to be bold.  Think about it–how would you feel if everyday your child’s teacher wore t-shirts and jewelry with religious messages that you disagreed with?

No.  And federal laws really aren’t clear about how you can explain any religious symbols you wear.  If a child asks about your religious jewelry, you can say that you wear the symbol because it’s an important part of your religion.  Some sources say it’s okay to then discuss more if the students asks; others say you can’t even give a one-sentence explanation of what it symbolizes.  This stipulation makes sense, because children are curious and impressionable; we can’t have them being indoctrinated at every turn, especially within a public school setting.  Personally, if I was in this situation and the child persisted in asking more questions, I would direct them to ask their parents about it.  Ideally, I would then contact the parents by phone and tell them their child had asked questions about what my jewelry stood for and what my reply to their child was.

Yes, you can participate in after-hours activities as long as it is clear that you are there as an individual and not as a school representative, and that your school is not endorsing the activity.

In most school districts, the answer here is NO.  While it’s true that the majority of Americans–and the majority of people internationally, across time and culture–believe that the universe was created by a higher being of some sort, this concept cannot be brought up in a public school discussion of the origin of the universe.

Creationism can be mentioned in comparative religion classes when analyzing how religious groups believe the world began, but it can’t be presented as fact (which of course, it’s not.)  ‘Creation Science’ is said not to fit the definition of basic scientific tenets and therefore should not be brought up in science classes.  When my students ask questions about creationism, I say, “I’m sorry, I would love to tell you what I believe about that, but it’s something that you should ask your parents.”

While it’s important to expose children to different belief systems, the powers that be say we must treat scientific issues differently.  Several states are fighting this right now.  And there are some sources which say it’s okay to discuss creation science as part of an objective overview in any public school in America– but I see this as extremely dangerous territory.

I read lots of nonfiction books to my kids, and I am amazed at the propaganda that permeates contemporary children’s books.  I’ve found the best approach when encountering something I disagree with is to read the text as it is, for two reasons: a) because children have a right to learn about commonly-believed scientific explanations and various cultural values, and b) kids need to learn how to think critically about messages they receive from media sources.

When I encounter something that conflicts with certain beliefs or is a source of controversy, I may add a sidebar to the discussion.  For example, I’ll say, “This book tells us that reptiles have been around for 2.5 billion years and may have evolved from fish.  Most, but not all, scientists agree that the earth is that old. And most, but not all, scientists believe that different species of animals evolved from other animals. Remember that scientists are always discovering new information.  When you grow up, you can be a scientist and help us discover the truth about the history of our planet.”

Though some people would frown upon with my decision to do this, it’s perfectly legal and appropriate to tell students about different viewpoints without espousing one in particular. Statements like these have never raised an eyebrow in my classroom, because I’ve ingrained in students that knowledge about our world (especially in the realms of science and history) is incomplete and always evolving. My students understand that knowledge is not static and that different people have different interpretations and beliefs about various subjects–and that’s perfectly okay!

Evolution was part of the third grade science curriculum I taught when I was in the classroom, but no controversial or contested theories were included. Keep in mind that evolution is not necessarily at odds with intelligent design, and is a separate topic from the origin of life.  The origin of the universe was not part of our third grade curriculum, but it’s a topic that the kids really wanted to talk about and it came up repeatedly as we read fables and studied both space and landforms. Normally when kids bring the topic up, I tell them that different people believe different things, and ask them to share what they know.  We then discuss that some people believe that the universe was created without a God, and some people believe that God did it.

My students have asked some extremely profound questions.  Some of my favorites, along with the response I gave:

Q: Were Adam and Eve before the cavemen, or were THEY cavemen?
A:  When you say ‘cavemen’, you really mean people who lived in prehistoric times: people who lived before any kind of writing was invented.  You mean the very first people on earth.  Some people believe that God created the earth, and the first people He created were a man called Adam and a woman called Eve.  That’s what really old holy books like the Bible and the Torah and the Koran tell us.  If that’s your belief, then yes, I would say Adam and Eve were prehistoric people, and they might have lived like you imagine cave people living.

Q: Our book says erosion made the Grand Canyon, but my Sunday School teacher said God did–is she wrong?
A:  People believe lots of different things about how the earth got to be the way it is today.  No one who was on the earth that long ago is still alive today to tell us!  So we have to depend on what scientists discover in their research, and on papers and books written by people who lived a long time ago.  Some people believe that the earth formed features like the Grand Canyon without any kind of god doing anything; other people believe that their God caused the water to flow a certain way and that’s what made the features.  The author of this book seems to believe that the earth was formed without God.  Your Sunday School teacher probably believes the earth was formed with God.  You can make your own decision about what you believe.

Q: If God didn’t make people, then how was the first person born?
A:  People who don’t believe in God have been trying to figure this out for a long time!  They have some theories–some ideas based on research–but nothing has been proven.  Just like people who DO believe in God can’t prove that God created people.

Schools can have moments of silence if they wish, but can’t encourage or discourage students to use the time to pray.  Personally I have never seen this ‘moment’ used effectively–primary students have no idea why they are standing there and it’s a complete waste of time.  I have taught in a school that used the moment of silence, and I talked with my kids about different ways to use it. Some suggested using the time to pray (which I clarified was fine if you believe in God), and I suggested they could also meditate (think about good things) or repeat an affirmation to themselves, such as, “I’m going to try my best in everything I do today”.  By law, students can always pray on their own–never with teacher or administrative guidance–whenever the timing would be appropriate.

It’s fine!  Grade it based on academic content, with no penalty or award based upon the religious content.