Home Articles Note to self, revisited

Note to self, revisited

Note to self, revisited 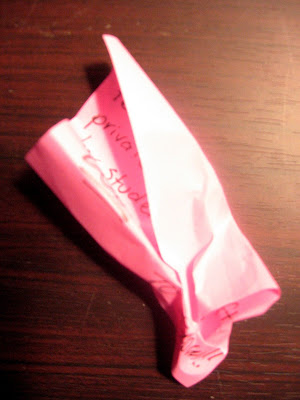 I don’t listen to myself; how can I possibly expect my students to do so?

I had dinner last night with my aforementioned friend, and could not resist posing the million dollar question. The answer involves a gift card with a value in the three digit range, along with numerous gifts from individual students. On the brighter side, my friend had a large ‘discard pile’ of gifts, which she handily passed on to me. Yay! A new purple scarf, silver boutique bracelet, penguin salt and pepper shaker set, cinnamon candle, and giant box of candy (along with several smaller items which will end up–shocker–in my prize box).

Also, she mentioned that another teacher friend received this book from a parent. The back cover reads, in part (emphasis mine): 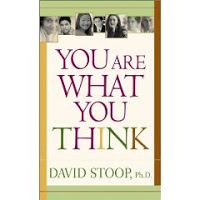 Attitude is what makes the difference between those who succeed and those who fail. And it’s easy to see-in other people. But it’s not always easy to recognize when our own attitude needs adjustment, or to know how to change it. In You Are What You Think, David Stoop shows you how to use self-talk to make positive changes in your attitudes and beliefs. This popular, revolutionary book will help you choose healthy, positive thoughts, respond rather than react to circumstances, overcome guilt, anger, anxiety, and stress. You can turn out-of-control into self-control and make your emotions work for you rather than against you. 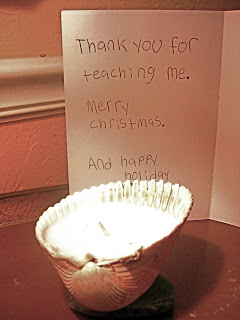 I might also add that the gifts I got from three of my own students were lovely. The picture shows one in particular which touched my heart. It’s from a very special little boy who informed me that he found the shell on the beach, and his dad made it into a candle. He explained the whole process in great detail, starting with the drive to the beach and ending with placing the gift bag on my desk.

I told him I would keep it forever. And I will.