The travel day from hell

The ISTE conference almost didn’t happen for me this year. It took me 18 hours to get to San Diego from New York. BY PLANE. You don’t want to know what happened. Suffice it to say that I was seriously close to saying forget it and going home. But I survived, and even connected with some other stranded ISTE-bound people at the airports, most notably a tech coordinator from New Jersey who talked iPad integration with me while getting a pedicure at a Dulles nail salon. Hey, we’re teachers. We know how to be flexible.

As soon as I stepped off the (final) plane, though, I knew that all the hassle had been worth it. San Diego is amazing. I have fallen in love with a lot of cities, but I NEVER say “Oh, sure, I could live there.” Guess what: I could live here. I feel like this is a place I have always belonged to and had just never known it. I can’t explain the vibe, but I keep thinking that the energy is just right. I feel deep down that one day this will be home. I mentioned that to my husband who has never told me about a place he’d seriously like to live other than New York. (Theoretically, we’ve always said we’ll leave eventually, but there hasn’t been any place we both loved enough to give up the city.) I was stunned when he said San Diego is one of his favorite places in the world. “The energy is right in San Diego” were his exact words. Wow. Is that a sign, or what?

So I’m in love with this city which naturally biases me toward this year’s conference. The mood and feel of each conference varies according to its location. Last year it was in Philly and the tone was just completely different. I can’t explain how…but it just WAS. Part of it, I think, is that the sunshine, palm trees, and 70 degree temps put everyone in a really chill mode where they’re relaxed and friendly and open. Another is “the locals effect”: there are more west coasters than north-easterners here, so the participants themselves are (mostly) a different crowd than last year. It’s cool to see the subtle, almost imperceptible differences in the way people talk and interact and conduct themselves in different parts of the country. I have never spent any time on the west coast with the exception of San Francisco for an ASCD conference, so I’m just kind of taking it all in. And wow, is there a lot to take in. Check out this panoramic photo of the blogger’s cafe tweeted by @mrhooker and tell me this convention center isn’t a cool place to learn and connect.

Looking through the online program, I realized I was interested in about 70% of the session topics, an all-time high for me. Because the sessions fill up quickly and the convention center is so big, I decided not to race from one end of the hall to the other in an effort to catch a particular session like I normally do. I had saved a ton of sessions to my planner in the ISTE app and planned to just scroll through to see what was nearby at any given time, or just wander into whatever session I saw wherever I happened to be. Oh, geez, I’m turning into a laid-back Californian already. The New Yorker in me is appalled.

This being a west coast conference, I was actually early for the 8 am session instead of racing in trying to catch the 10 am. Time difference, how I love thee (until I have to return east.) I had time to peruse the poster sessions, which are basically little stations where educators can set up info about cool things happening in their schools and people can walk by and talk to them about it. I learned about how Voicethread is being used at one school, SMART Boards in another, robotics in still another, and so on. It’s a great method of informal professional development because you can get little snippets of info and online resources for follow-up without having to sit through a 2 hour lecture. I always enjoy the poster sessions at ISTE. They change every 2 hours, I think, so I try to stop in periodically throughout the day.

At 8:00, I strolled past a session called “Apps with Aptitude” about K-4 apps, thought it sounded good, and took the last seat. There were some great app recommendations shared. I also liked the presenter’s point that if you only have one ipad, you should use it as a center. Dont keep it for yourself, even though that is most teachers’ first instinct (and it would probably be my initial thought, too). She also pointed out that we have to be careful with 1:1 iPad programs, because they quickly turn into a scenario where each kid works independently and isolated just like they used to do with paper and pencil activities. She cautioned us to make a conscious effort to make sure the learning is collaborative.

The wifi was slow in the conference room even though we had our own dedicated connection, so the time we were allotted for perusing apps was pretty much useless. I struck up a conversation with the guy sitting next to me, who was a tech coordinator, if I remember correctly. I asked him a bunch of iPad questions that people always ask me and got some great reflections from him. I love hearing about how other schools do things. Here is the link to see all the apps we looked at in the session.

There was free coffee and breakfast starting at 9:45 in the exhibition hall, so naturally I was there.  Afterward I walked around to talk to the vendors. I made some great connections and has some wonderful conversations–not something that always (or even often) happens at expos. I ended up spending nearly an hour and a half in there just checking everything out. 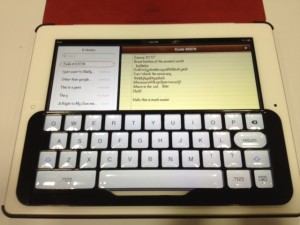 One thing I definitely want to share with you is iKeyboard, a little plastic overlay you can put on your iPad screen so that your touch screen keyboard feels like a real one. I type horribly on the touch screens and make tons of errors, but this little fix? Perfection! You can just peel it off when you don’t want to use it. It’s $30, which seems a bit high for a piece of plastic, but then again, it’s cheaper than buying a bluetooth keyboard.

I stopped by the BrainPOP booth from 12-1 to help out so that my colleagues could take a lunch break. There are some really cool new things happening with BrainPOP right now and it was fun to share them with people who came by the booth. Most had heard of BrainPOP already and lots of people already have subscriptions, so they just wanted to know what was new. WELL, since you asked…one of several exciting developments is that the BrainPOP Jr. app was released today! Really exciting to see that demo’ed in the booth.

I got into some conversations in the hall and ended up trying to get into a 2:15 session at 2:15. Not a good idea. I walked down two entire hallways and every single session I was halfway interested in was completely full. So, I took the time to just decompress a bit and rest. I had a cup of tea with a friend, sat outside on the convention center deck which overlooks the beautiful marina, and caught up with some things online.

Last session of the day: Creating and collecting digital work

I was very excited about this session, a) because it was presented by Kevin Honeycutt and Tammy Worcester, who are great presenters and very knowledgable, and b) because this is the missing link for me in tech integration. I sometimes show teachers how to have their kids create screencasts or Google Docs or some other awesome tech tool and then I feel like the unspoken question is: What do I DO with what they make? And: Do I want 30 email notifications that kids have shared docs with me? Do I want to manually upload 30 videos to a blog so I can see what the kids did? How do I manage this?

The main answer is: Google Forms. Have kids get their work into a URL (usually by exporting/uploading it to the app’s site) and then copy and paste that URL into a form you’ve created. So if kids are doing a history project, create a one question form that asks for a URL. Kids log into Google Apps with their accounts, paste their URL, and then you have the entire class’ links in one spreadsheet. I’m probably not explaining that well (it’s 2 am to my brain) but here’s the link for step-by-step instructions.

I caught up with more old buddies for a few minutes after the session, then headed over to the Jewish Educator’s Networking event. No, I am not Jewish, but I work in Jewish schools, and it was pretty funny to me that I actually knew about 10 of the 150 people or so in the room, a far higher number than in any other room I’ve been in at the conference. I would have loved to stay and join in those conversations about the issues Jewish day schools are facing but there were already 2 other places I had committed to being, so I left after about 15 minutes.

There was a meet up which seemed to revolve around having a drink, eating pizza, and playing pool. I don’t really care about any of those things (except the pizza, which I arrived too late for) but the main purpose was to catch up with a few of my favorite educators in the whole wide world. That made me really happy. Then I left to go have dinner with another awesome lady. Wonderful food, wonderful convos.

Tomorrow (Tuesday) is the last full day of the conference. I am sad I got here so late, and that I missed SocialEdCon (formerly EduBloggerCon), but I’m packing it in while I can. I have my basic schedule for the day mapped out and am planning to play the sessions by ear again. Most of the value in ISTE for me is connecting with people I usually interact with only online, and getting to talk in real life about the work they’re doing. ISTE builds in a lot of informal learning time and makes it easy for participants to have conversations and learn from one another (not just from presenters standing on a stage while we sit passively and listen.) It’s a unique approach to a conference, and one that I think more conferences will begin to emulate.

Lots more to come tomorrow…I want to share with you some of the things other participants are saying and learning, and some of the big ideas in the conference and big trends in education technology. Wednesday after the conference ends at 2:30, I’m going out to see the city and will have pics to share!