Home Articles How to deal with co-workers who constantly complain

How to deal with co-workers who constantly complain

How to deal with co-workers who constantly complain

Whether it’s in the teacher’s lounge, staff meetings, or just passing one another in the hallway, even a short conversation with a negative teacher can be totally draining. Everyone complains from time to time, of course. But what about those colleagues who never have anything positive to say and seem determined to tear everyone else down? Here are 11 tips to help you head off chronically complaining coworkers at the pass: 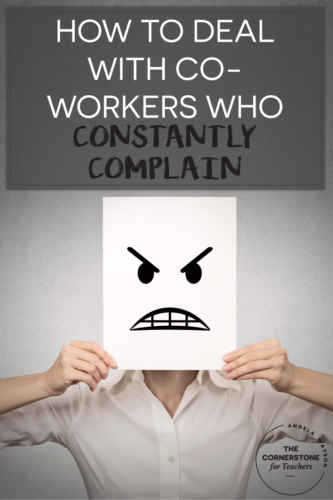 1) Seek out the positive, fun people in the room and sit near them.

If the main conversation devolves into something you don’t want to listen to, you can just strike up a quiet discussion with the person next to you. If there aren’t any positive people in the group, sit next to the quiet ones who won’t be whispering snide comments to you.

2) Set the tone by starting the conversation topic yourself.

Don’t wait for a complainer to direct the flow of the discussion. As soon as a few people in the group are gathered, dive right into something positive and direct your comment or question to someone in the room who generally enjoys his or her job. Ask, “Hey, how did it go with that new activity you tried this morning?” or “One of my kids said the funniest thing during math today, listen to this…” or “I saw the coolest thing on Pinterest, I think we should try it!”

3) Find topics beyond work that you have in common.

Talking about outside interests creates a strong bond among co-workers. Share your personal lives with one another so that you can ask about families, hobbies, travels, etc. and not have to revert to a cliched, “So, did you get that stupid email from the principal?” or “You won’t believe what this kid did today” as a conversation opener. If your co-workers don’t want to share anything, get the ball rolling yourself by talking about something innocuous, like local restaurants you like (“Has anyone ever been to __? I just tried it last week and it was really good.”)

4) If you don’t have anything in common, ask the most positive (or most talkative) person in the group a question.

The key here is to get someone chattering on about something that no complainer can dissuade them from. If one of your co-workers is about to have a baby, is planning a wedding, or has another exciting event happening, inquire about that. Everyone loves weddings and babies, after all. Or, ask one of the talkative teachers about what her grandkids have been up to. It might not be the most thrilling conversational topic, but it’s better than being subjected to a rant about how the entire educational system is headed down the toilet.

I used to go out for happy hour with a group of teachers whom I loved dearly, but who never seemed to run out of things to complain about. It was mind-boggling–we were done with school for the weekend, we were out at a restaurant having a nice meal–who really wants to hear about the fit one of your students threw for the millionth time? One day, I  finally just said, “I need a break from talking about school and I don’t want to complain anymore, it’s making me miserable. Can we get all the school-related talk done now and then change the subject?” My friends were actually relieved to have some boundaries placed on the conversation, and it became our tradition after that to discuss the rumors and complain for only the first fifteen minutes or so. At that point, someone would invariably say, “Okay, are we done? No more school talk now!” It became like a game to catch each other accidentally talking about work and tease each other about having to foot the bill for the table if too many slips were made.

Smile and nod, smile and nod, then change the subject. You can also respond to complaints with something positive: each time someone tells a story about an irate parent or out-of-control child, share something sweet, funny, or inspiring that happened to you. This is very annoying behavior to those who are chronic complainers because it’s no fun to complain alone. So, if you’re consistent with it, they’ll quickly figure out that it’s a waste of time to use you as their sounding board and they’ll go elsewhere.

7) Don’t attempt to validate the complaints or prove them wrong.

In team meetings, I used to try to make the complainers feel heard and acknowledge their concerns. However, it can be counterproductive to validate the opinions of those who are determined to point out everything wrong with a situation and why an idea will never work. I’ve found it’s better to let them say their piece and then continue on with the meeting. If you’re explaining a new schedule and the complainer says, “Well! That’s going to make it impossible for me to teach all 3 reading groups now!” just make eye contact with them so they know you heard them, and continue explaining how the schedule will be implemented. Or say, “This will be a challenge, yes. So let’s keep talking about how we can make this work.” There’s nothing you can say to convince the Debbie Downer types that the new system will be effective (especially when you have doubts about it yourself), so don’t waste your energy with the back-and-forth. Always keep moving the conversation forward.

8) Keep the interactions as brief as possible.

Don’t spend a minute longer with the complainers than you have to. And use the time crunch teachers are under as an advantage. In casual situations, excuse yourself by saying, “I gotta get going to make these copies before the kids come back! See you later!” In grade level meetings, stop the complaining by saying, “Since have about fifteen minutes left, maybe we should finish planning this out and then when we’re done, we can go back and look at some of these issues that might create a problem.” (If your meetings are anything like mine, there won’t be any time at the end.)

9) Remember that complaints and rude comments are not personal.

They’re more of a reflection on the person who is saying them than the recipient. So if a colleague criticizes something about your teaching or tries to make you feel inferior, let it slide off your back. Tell yourself, This is his/her problem, and it’s not about me. I refuse to allow someone who dislikes their job to make me dislike mine, too. I’m not permitting those rude comments to take up anymore space in my mind. I’m dismissing them, and I’m replacing them now with thoughts about something that worked well in my classroom today.

10) Stop thinking about the complainer when you’re not around him or her.

It’s very tempting to make jokes about the Debbie Downers in your school, anticipate their response to change (“Oh, no, I can only imagine what she’s going to say about this!”), and generally give them more consideration than they deserve. Don’t allow the complainers in your school to determine how things are done. Crowd out their negative energy by consistently talking about the good things that are happening and staying focused on your goals.

11) Build a community of people who inspire and uplift you.

A good support system starts by finding just one positive person in your school that you can seek out after a hard day. You can also create or find a Personal Learning Community (PLC) with teachers on social media and receive support there. (Most online communities are free, but you can also join the 40 Hour Teacher Workweek Club if you want more in-depth support and resources.) It’s really important to have other educators you can go to for advice without worrying that they’ll make you feel more discouraged than when the conversation started, so make it a priority to find like-minded teachers who can prevent you from complaining and help you problem-solve constructively.

How do you handle chronic complainers at your school?