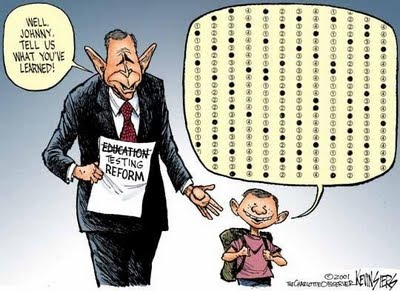 The following is an excerpt from a comment (yes, just a comment) left by “Jane Doe” in response to an excellent post at Bridging Differences (follow the link to read the original post and the comment in its entirety). This is something every American citizen needs to understand about what’s really happening with “accountability” in education. Big props to This Brazen Teacher and The Frustrated Teacher who are sharing this, as well. If you’re already reading those blogs, skip this post; if you’re not, follow immediately. Then spread the word about these lies:

A few of the many lies of NCLB, in no particular order:

We lie when we speak of proficiency as if it were an objective standard when really it is just a number guessed at by a dozen teachers at a meeting one weekend. And half of the teachers thought the number was far too low and half thought it was far too high.

We lie when we say that a high score on a minimum-skills NCLB test means a student is “Advanced” when really it only indicates that the child has mastered mediocrity. A perfectionist, perhaps. But well-educated? Not even close.

We lie when we pretend that the No Child Left Behind accountability system measures all children. As the Associated Press revealed long ago, NCLB has so many exclusions that millions of children are never counted.

We lie when we report NCLB test scores separated by race knowing it would be illegal to assign students to schools or programs using race.

We lie when we say a school is doing well when it failed to reach simple proficiency and failed to make AYP and only became a success when it had a third chance with a growth model which showed that it might be doing well at some point in the future. We lie when we say that an entire school district is a failure because some of its many schools are struggling. We are lying when we say that NCLB can accurately identify schools as a successful or failing.

We lie when we take a picture of a mentally challenged child pointing to the nickel and not the dime on a Friday afternoon because we need evidence of “applied number sense” for her NCLB portfolio, even though we know that by Monday morning she will have forgotten which is which.

We lie when we tell parents of mentally challenged children that we want them to get the best education so we will give them a small financial voucher to leave the public schools without telling them that removing their child from our rolls will help us to make AYP.

We lie when we keep very-high-functioning children in special education programs because they are the ones we intend to use when we decide whose test will be included in the 2% we are allowed to count under NCLB for our special education reporting.

We lie when we say we have a system that can use test scores to identify highly-skilled teachers, but the same teachers don’t show up as highly-skilled from one year to the next even when they are teaching the same level of students in the same school.

We lie when we say that we are measuring whether a student is on grade level (using proficiency), determine that some students are not on grade level, but then advance those students to the next grade when we have just said that they were not ready for the next grade — grade after grade until the 8th grade student is still stuck at a 5th grade level. Even the proponents of NCLB testing aren’t confident enough in the tests to use the data to make a decision that might have some real impact.

We lie when we say that we have a system of rating teachers that is more rigorous than the old principal evaluations, but somehow a far majority of teachers are always better than average and almost every teacher willing to participate gets a bonus check of some size.

We lie when we claim that tests are designed by large groups of educators when only one or two people will make the decision about which test items will be on an actual test.

We lie when we speak of impossible theoreticals as if they were facts. If the worst students had the best teachers for three years in a row, then those would not be the best teachers any longer. And two of three teachers would have left the school after the first year of the program.

We lie when we don’t report that the statisticians asked about the validity of growth models were just given a multi-year million dollar grant to study their use, so they probably won’t have a definitive answer until that money runs out.

We lie when we say that what was learned from NCLB was never known before NCLB, but that is understandable. Every generation believes that it invented sex. No wonder these young ed reformers and the recently converted think they are the first to use “data” or the first to document differences between groups. Please, read a book published before you were born. Talk to someone who doesn’t own an iPhone. If you’re not careful, you might just learn something.

We lie when we say that what gets measured gets done and then say that what doesn’t get measured (history, science, the arts) is still getting done. Some people aren’t very good at lying.

We lie when we say that we need to pursue what is in the best interests of the children and not the adults because the real goal of education has always been to create a healthy, productive, creative, civilized society and that has always been in the best inter
ests of adults. Adults, the far majority of society, benefit more from having well-educated children than the children do. We lie when we criticize some adults for being motivated by self-interest while suggesting that we, ourselves, are above that. The best lies are the ones we tell ourselves, aren’t they?

We lie when we say that test-based accountability using these deeply flawed measures is the best system we have because it implies that the system is good enough and we know that getting and using so much misleading or wrong information cannot improve education. Having more misleading data and powerful computers to allow us to get to the inaccurate information faster will not help. It can’t, it hasn’t, and it won’t.

And that’s the truth.