When I happened upon a display by some lady named Dinah Zike at a conference, my first thought was Holy cow, this is what I’ve been doing in my classroom for YEARS! Finally, someone’s established the value of these activities and was smart enough to make some money off it!

As it turns out, I AM SERIOUSLY LATE, because Dinah is the guru of foldables: I tossed her name out to newsletter subscribers and got rave responses; I discovered multiple discussions at the AtoZ Teacher Stuff forums including some info on free foldables; and I opened the supplemental resources for our district’s new reading series and there she was again, partnering with McGraw-Hill! Clearly this woman is unstoppable. 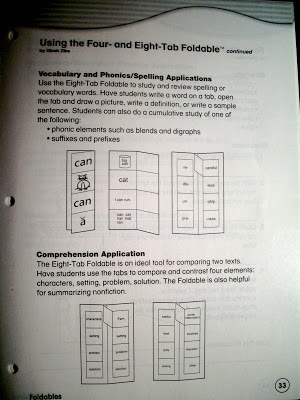 A page from the foldables book included with our district’s reading series.

In case you’ve been hiding under the same rock that’s had me sheltered, foldables are multi-dimensional graphic organizers that can be used for skill reinforcement, practice, and/or information gathering. They’re unique because they provide a kinesthetic tool for learning (which is extremely important for younger students and rather hard to incorporate when teaching abstract skills such as reading comprehension). The concept reminds me a bit of the Alternatives to Worksheets book and it’s sequel, which have molded my teaching style more than any other resource book (remarkable, since I rarely meet anyone who’s even heard of the series). Dinah Zike has a similar idea that is–dare I say?–even MORE effective in helping students organize and analyze information. 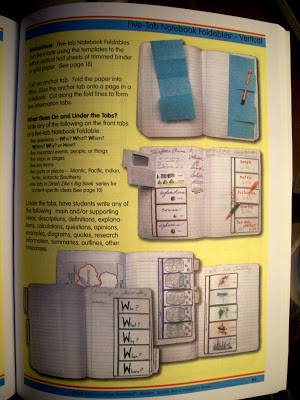 Dinah’s reps have graciously allowed me a review copy of any book in her collection, which was tantamount to giving an empty plastic bag to a kid in a candy store and hollering “Fill ‘er up!”. After much deliberation, I settled on Notebook Foldables For Spirals, Binders, and Composition Books. It’s designed for grades 4-college, but since I’ve already tried many of the ideas in the primary grade books, I thought this ‘big kid’ version could offer some unique ideas I could adapt for my third graders…and I was far from disappointed. 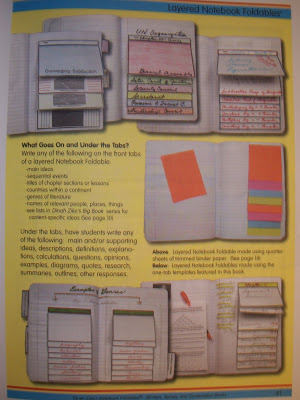 I really can’t say enough good things about how engaging the foldables are for kids, and how effective they are in helping kids organize, comprehend, and retain information. I like to display one student’s foldable on a bulletin board in the classroom, so when I ask questions months after a unit, the kids can reference it. I taught a habitats unit once in October and asked the kids about ocean ecosystems in February. No one remembered until I said, “Think about the foldable we did with blue paper: you drew fresh water ecosystems on one side and salt water on the other…” and immediately five hands went up. I pointed to the sample on the back wall, and eight more hands went up. That’s how powerful these things are. 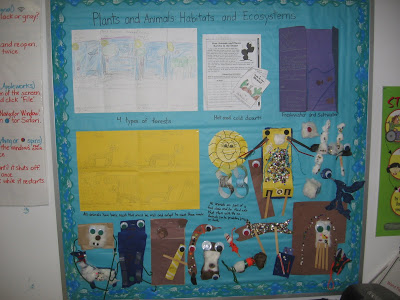 The Notebook Foldables book, like many others from Dinah, even came with a companion CD featuring printables. The Dinah-Might Adventures site has some free ideas which are also worth checking out.

Have you used foldables (from Dinah, or your own creation)? Any good ideas to share for graphic organizers, manipulatives, or worksheet alternatives?