Home Articles Become a teacher. Your country needs you.

Become a teacher. Your country needs you.

Become a teacher. Your country needs you.

I watched the State of the Union address last night with the #SOTU Twitter feed scrolling down my laptop screen. At times, there were over 1,000 tweets per second about President Obama’s speech. Some were comical (“When is Obama going to announce the iPad 2?” and “Budget cuts taking effect immediately. There will be no pizza bagels at tonight’s reception.” and “I’m a Catholic and even I think there’s too much standing, sitting, and standing again at the SOTU”.)  And there were many, many jokes about Boehner’s complexion rivaling that of the ‘Jersey Shore’ cast.

Others tweets reflected on the deeper issues. Most tweeters seemed to positively view Pres. Obama’s message on education. My husband and I loved one particular line and I prompted posted the following on Facebook and Twitter:

Little did I know how controversial that statement was.

The comments I got back represented a really wide range of opinions, and the dissenters were passionate. Some people disliked the president’s assumption that becoming a teacher is an option during these times of extreme budget cuts:

Others thought Pres. Obama was taking the profession far too lightly: 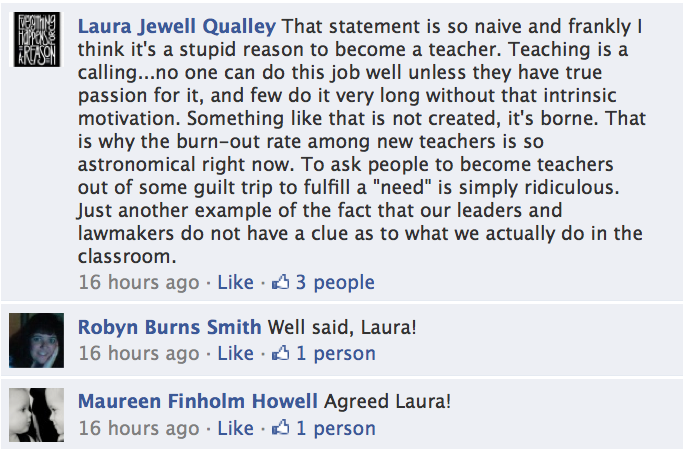 I think these are really important perspectives that challenged the way I thought about the president’s speech. Here is my response: 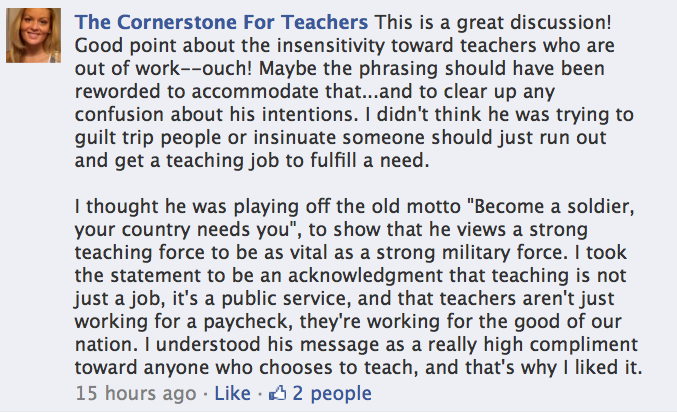 Ultimately, I still believe “Become a teacher–your country needs you.” was a great line. What are your thoughts about President Obama’s message on education?