Home Articles Why using a camera to take notes is smart, not lazy

Why using a camera to take notes is smart, not lazy

Why using a camera to take notes is smart, not lazy 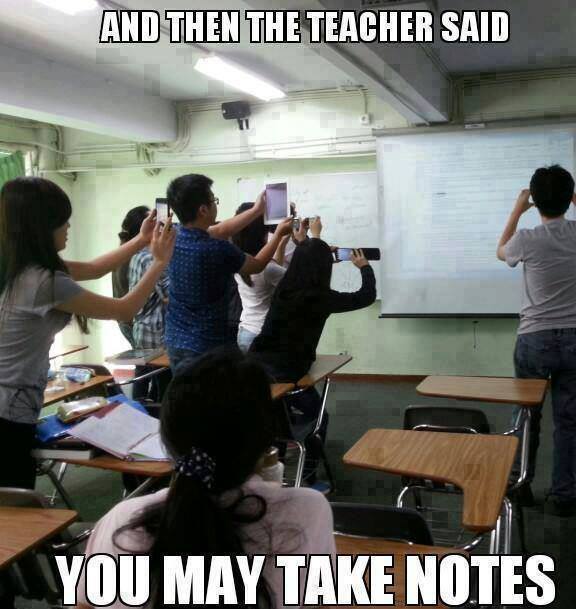 What’s your first impression of this image?

When I shared it on Facebook recently, some pretty passionate responses were sparked. A number of teachers thought that students taking notes with phone and tablet cameras was a useful strategy, but they were far outnumbered by dissenters. Some commenters viewed it as evidence of bad teaching, kids’ laziness, and/or the dumbing down of the next generation. Most people who objected pointed out that writing things down helps students to memorize and creates new neural pathways: they view note taking as an integral part of the lesson, not busywork.

Here’s my take it.

The image is meant to be humorous. I’m not making the assumption that any teacher actually allows students to sit around passively and listen to a lecture, snap a photo of a slide at the end, and then walk out the door. Who’s to say students hadn’t taken detailed notes throughout the lesson and then used their phones to capture the assignment so they could be sure they had the details correct? What if the teacher’s lesson required students’ total focus and note taking would have interfered not only with their comprehension, but with the pacing of the lesson? After all, writing things down takes some kids a looong time and causes them to fall so far behind the teacher that they miss the whole lesson.

I don’t think anyone would disagree that we need to teach kids note taking skills, but it’s my perspective that taking photos can actually enhance that process. Our intent is to prepare students to be successful outside of school  as well as in it. We need to teach real world skills. And in the real world, people use their phones to make life easier. I’ve been in plenty of staff meetings and business meetings in which people took pictures of slides and even handouts. I use my phone camera to take pictures of product info when shopping instead of writing down model numbers and prices, to capture recipes I see in magazines, and to have access to maps and directions that I would have otherwise had to hand-copy or print out. Camera phones are one of the best and simplest tools we have today, and each year, more and more of our students have access to them. Why not harness that available technology and use it to their advantage?

The real question I think we should be answering is this: how do we teach students to take notes in the 21st century? It might be instinctual for kids to whip out a device and take a snapshot, but I’m willing to bet that most of them don’t have a system for finding and using those images for studying later on. Similarly, most of them aren’t savvy with writing things down and using their notes to help them study.

So, part of our job is to help our students think critically about the pros of and cons of written note taking and pictures/video, choose when to each each method, and learn how to reference and organize all of their notes so they can be of use later on. Yes, that will take some additional time out of our instructional day. But think about how many hours we’ll be gaining by teaching kids to make the note taking process more efficient and meaningful.

What’s your perspective? How do you teach students to take notes in the 21st century?