Home Truth For Teachers Podcast The Swiss Cheese Model: Letting go of “all or nothing” thinking

The Swiss Cheese Model: Letting go of “all or nothing” thinking

The Swiss Cheese Model: Letting go of “all or nothing” thinking

The Swiss Cheese model was created by James T. Reason and is used in risk management, aviation safety, engineering, healthcare, computer security, and more. I think there’s a real place for it in K-12 education as well.

Here’s what Wikipedia has to say:

“The Swiss Cheese model “likens human systems to multiple slices of Swiss cheese, stacked side by side, in which the risk of a threat becoming a reality is mitigated by the differing layers and types of defenses which are “layered” behind each other. Therefore, in theory, lapses and weaknesses in one defense do not allow a risk to materialize, since other defenses also exist, to prevent a single point of failure.”

If you’re not familiar with Swiss cheese itself, it typically has holes in it. There are apparently fewer holes in the cheese than there traditionally used to be, due to changes in production and milk quality. But during the aging process of Swiss cheese, which is officially called Emmentaler after the region of Switzerland in which it was first developed, the bacterium gives off carbon dioxide, which forms bubbles, also known as eyes or most commonly, holes.

The holes are highly noticeable if you slice a block of Swiss cheese, especially when it’s sliced thinly. And that’s what I want you to envision here: a thin slice of yellowish-white cheese that has holes in it. If you want complete coverage of your bread in a sandwich, one slice of cheese isn’t going to be enough, right?

There might be 5 holes in the cheese and those bites of sandwich would be cheeseless. So, you’d add another slice on top. Because the holes are not in the same place on every slice of cheese, laying another slice on top means that some of the first slice’s holes are now covered by the second slice, and some of the holes in the second slice are covered by the first hole’s. If you really want a nice thick layer of cheese in your sandwich, you may want to add a third slice, so it’s likely that all the holes are covered with at least one layer of cheese. 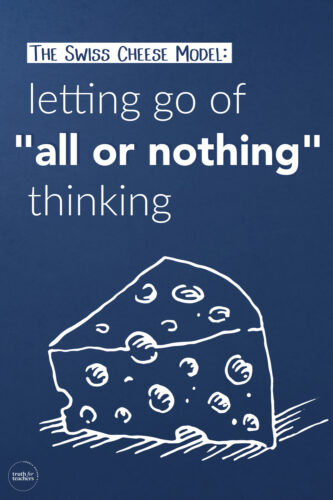 Listen to the audio below,
or subscribe in your podcast app

Can you see how this works as a metaphor for mitigating risk and solving complex problems?

In the Swiss cheese model, your school’s defenses against failure are these imperfect barriers: slices of cheese with holes in them. When you’re trying to overcome systemic poverty, underresourced communities and schools, staff shortages, pandemic fallout, a lag in academic or socio-emotional development in students, and so on…we’re talking about huge issues that no one thing will solve.

It’s far too easy to oversimplify an issue, to try to boil it down to “The government needs to __” or “The superintendent needs to ___” or “Parents should be ___.” The truth is that endemic problems that have existed for a very long time are not going to be solved by one singular thing. We cannot look to one person or one group of people or one entity for the solution to all our problems.

The most comprehensive and long-term solutions tend to be multi-faceted: they tackle the problem from multiple angles. And that’s how I want to encourage you to face the issues that you’re struggling with right now in your classroom or school or even personal life and community. I think it’s a good approach to nationwide and worldwide problems too–anything that seems to be too hard to solve, any issue that seems like it just can’t be fixed.

Let me give you an example you can probably relate to: students in your class are largely disengaged, distracted, unfocused, and not turning in high-quality work on time.

We can blame the kids, their families, the district’s expectations, or society at large for this. In truth, there’s probably no one singular cause and therefore no one singular solution.

So what if we stopped oversimplifying, and grappled with the complexity and intersectionality of problems? What if we used the Swiss cheese model?

If you have an upcoming project students need to turn in, and you’re worried that they’re not keeping up with the workload, you can provide mini deadlines: this Tuesday, topics are due; this Friday, first drafts are due. Consider that a layer of Swiss cheese: you’ve done a thing, one very imperfect thing, one thing that clearly has holes in it and isn’t going to cover every single student…but it is one layer of defense against the problem.

Then look for another layer of Swiss cheese to lay on top: maybe you have students text their parents with their due date so the parents are kept in the loop and can stay on top of them. Again, this is an imperfect barrier against the problem: some kids won’t do it, some parents won’t check in with their kids. But you’ve added another layer, and it will help SOME kids, especially since this layer goes on top of that first one with the mini-deadlines.

Make your layers of Swiss cheese as impenetrable as possible: you might teach kids how to set reminders on their phone the day before things are due. You might have quick conferences with individual students to check in mid-way through the project, and again toward the end with the kids who are likely to need additional support. You might assign students to peer editors who check in with each other and keep each other up to date. These are all additional layers to prevent kids from falling through. That’s the Swiss Cheese Model.

Now you might be thinking, “But Angela, this is what we already do, we’re just not calling it that.”

Here’s the difference though: in my experience in education, we do most of these things begrudgingly because we know they’re not 100% effective. Because we know that an additional support or intervention isn’t going to completely fix the problems once and for all with every student, we ge4t frustrated.

When we hear a new initiative or innovative idea, many of us have an immediate urge to think of all the situations in which that approach won’t work. We think, “Well that’s not going to help THIS kid” or “That’ll never work in MY classroom” or “Hah, good luck making that happen HERE.”

My encouragement to you is this: let go of the “all or nothing” thinking. Just because something won’t fix the problem for everyone in every scenario doesn’t mean it has no value. Maybe the solution won’t stop X from happening, but it will stop Y. And then maybe another approach will stop Z, and those 2 things combined WILL lessen X a little bit, especially if you’re no longer as worried about Y and Z.

What I”m really suggesting to you here is to shift to the Swiss Cheese Model mindset.

Those little things you’re doing to help your students that don’t seem to be making a difference for some of them? They are. They’re a layer of Swiss cheese, one additional barrier between them and failure, one additional covering to keep them from falling through.

That Open House or Back-to-School Night you offered and only a handful of families showed up to? That’s another layer of Swiss cheese: it didn’t prevent all the kids from falling through, there were holes in that solution. But you put it on top of emails, conferences, and other layers of things you offer to keep parents informed? You have a much stronger barrier to hold these families up.

In the way that I envision the Swiss Cheese Model in education, it ultimately doesn’t matter whether the layer you put down catches everyone. It’s unrealistic to expect it to, and it doesn’t have to. Just keep layering more solutions down.

And, keep in mind that this does not mean endless layers forever. There IS such a thing as too much cheese, right? So many layers it’s this solid brick that’s too much to swallow? You don’t need to do it all. I’m just saying, don’t do one thing and then get frustrated because it didn’t work for everybody.

Think in terms of multiple smaller solutions rather than finding that one big perfect thing that fixes it all forever.

And maybe on another scale, you could also think of yourself as this one layer of Swiss cheese, this one barrier between your students and failure. You are not perfect. There are holes in your approach. You cannot be the complete covering the student needs. But it’s not your job to be the entire brick of cheese: you’re one slice. The kids’ families members, other teachers, community, coaches, and so on all provide another layer of protection to hold that student up. It’s not all on you.

So, be willing to tackle hard problems with layers of imperfect solutions, rather than giving up doing anything altogether.

We need folks who are willing to fight for what’s right for this next generation, and that’s YOU. Let’s solve the bigger problems in our country and our world together, one small, imperfect layer of support at a time.