Home Truth For Teachers Podcast Stop overworking Future You: why NOW is the perfect time to make changes in your classroom

Stop overworking Future You: why NOW is the perfect time to make changes in your classroom

Stop overworking Future You: why NOW is the perfect time to make changes in your classroom

One of the big principles that we’re always coming back to in The 40 Hour Teacher Workweek Club is that implementing small changes right away is more effective than hoping you’ll feel like implementing big changes later on. We often make the mistake of assuming that our future selves will somehow be less stressed and busy and more disciplined and productive, and therefore we’ll able to handle making positive changes LATER.

The problem with that logic is that those qualities of being less busy and more productive later don’t just happen on their own. This summer or next year only seem like they will be slightly less crazy than right now because all the unexpected interruptions, emergencies, and new obligations haven’t cropped up yet. Unless we’re actively taking steps NOW to set our future selves up for success, things really aren’t going to change very much.

It’s NEVER too late to change something that’s not working in your classroom, or in your life. Click To Tweet

If you’re not consciously aware of that, you’ll be tempted to see a great teaching idea or a more productive way of working and think: Oh, I’ll figure that out over the summer and try it out in the fall with a new class. I don’t want to confuse the kids and parents with something different right now. Plus, I’m too busy to think about it — I’ll try something new in the fall.

But here’s the problem with that approach: EVERYTHING is brand new in the fall.

You’ll have a new group of kids and parents you don’t know yet. You’ll be trying to implement a bunch of new policies that the school district put in place and adapt to the changes in curriculum, standards, testing, or assessment that seem to crop up every year. You’ll already be working an insane amount of hours in August and September just trying to keep your head above water.

Why in the world would you want to add to that stress by trying out a bunch of new procedures or routines during the most stressful time of the school year? 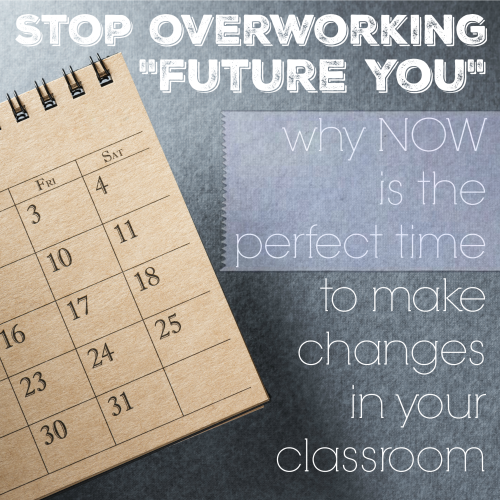 What happens if you wait and try new ideas in the fall?

If you wait to try out all your new ideas when you’re starting over with a new class, one of two things will likely happen:

Which means the whole cycle then starts all over again, and you’re looking at another school year of inefficient procedures and tired teaching strategies until hopefully, you’ll have the energy to try something new in the fall of 2017.

Let’s talk about how to break that cycle, and embrace the fact that your willingness to adapt what you’re doing NOW has the ability to save you countless hours and immeasurable stress in the new school year. 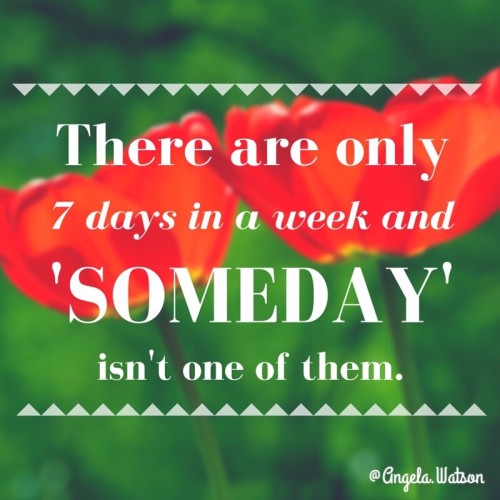 If you’re going to try out new classroom procedures, routines, and teaching strategies, there are five reasons why the best time is now: 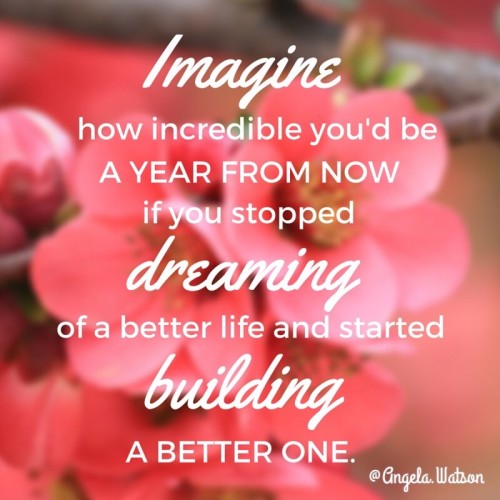 Don’t worry that making changes to the way you run your classroom will confuse the kids or cause them to question your authority and expertise. First, do some brainstorming about what you’d like to change and how you’d like things to run, then have a conversation with your class about it. Don’t try to sneak in a new procedure and act like that’s the way you wanted things done all along. (Yeah, I’ve tried that. They weren’t fooled.) Just level with the kids.

Here’s an example. One spring, I became completely fed up with my students constantly writing down the wrong page numbers for homework or forgetting to copy all of their assignments. It had been happening occasionally throughout the school year but had really gotten bad once testing was done for the year and the kids had mentally checked out.

I realized I wasn’t really setting students up for success in this area, and that if I didn’t try to fix the problem now, it would probably continue not only for the remainder of the year but with next year’s class, too. I took some time to brainstorm solutions, and then sought input from the kids to get their buy-in.

I’ve been thinking about how we manage homework. I’ve noticed a problem with people sometimes copying down the wrong page numbers or only writing down part of the assignment. Have any of you noticed this happening? Why do you think this might be a problem? I’ve been trying to think of good solutions. What are your ideas for fixing this problem?

That gives me an idea…you’ve touched on something I was considering over the weekend. What if I tried giving you five minutes instead of three minutes to write everything down, and you used part of that time to partner up and have a friend check over what you wrote? Would you be willing to try that out for a week or so? Let’s practice it, and then we’ll have another conversation soon to talk about how it’s working. We can always make changes then. You guys are pretty responsible, but I don’t know if every class I teach will be that way. I really want your help in coming up with a good solution here that I can use with next year’s class so they don’t have this same problem.

I modeled exactly what I needed students to do and guided the kids through it. And instead of having five kids miscopy their assignments each day, I started having one or two. 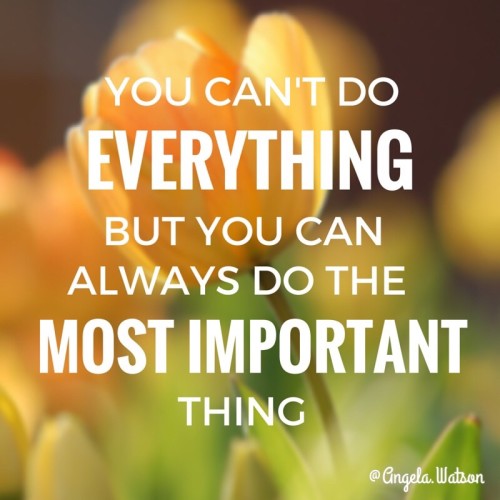 Only have time to skim this article? Click the player below to listen instead!
I was SO GLAD I didn’t wait until fall to try to figure out a better system and test it out with a group of kids I didn’t know well yet!  It turned out that five minutes was actually too long for students to get their assignments in order, and that resulted in some kids playing around and getting off task.

It could have been disastrous — or at the least, very stressful — to discover that during the first week of school. But by this late point in the school year, my students and I had such a strong rapport that it was easy to get everything back on track. We discussed it as a class and tried shortening the time to four minutes. That turned out to be perfect.

So, not only did I have less stress and homework headaches for the remainder of the school year with that class, I was able to start the following school year with a better strategy that I’d already tested out and felt confident my next group of kids would be successful with.

Future You wants to enjoy summer break. Don’t ruin it for you.

An added bonus of experimenting with different ways of running your classroom now is that you not only avoid overwhelming yourself in the fall but in the summertime, too. Many teachers fall into the trap of making a mile-long to-do list of school stuff they think they’ll tackle in July, and before they can even blink, summer’s over and they barely got anything done.

The weight of the undone work hangs over them when they’re supposed to be relaxing, and the guilt of not doing it makes them feel like they’re behind before the school year even gets started.

So, be realistic with yourself. The summer flies by. Always. Every year. You probably aren’t going to spend as much time working ahead on school stuff as you’d like. Remember that Future You is not going to be any less busy or any more disciplined and productive if you don’t start taking steps NOW to make those changes happen.

By experimenting with small changes now — figuring out your new strategies, trying them out with your class, observing what works and adapting it as needed — you’ll minimize the amount of prep you need to do over the summer. You’ll be able to spend some time relaxing and enjoying your break and still be ready to hit the ground running in the fall. 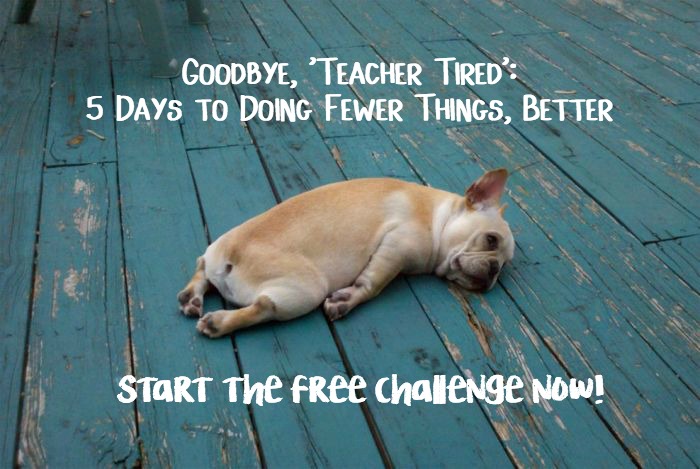 Want actionable steps to help you figure out what you can eliminate and take OFF your plate? Get the free challenge sent to your inbox now. 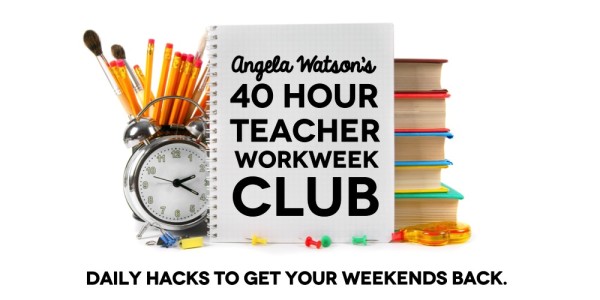 If you’d like a step-by-step system, consider joining us in The 40 Hour Teacher Workweek Club, a productivity course that begins twice each year. We’ll be accepting new members from December 30-January 9th, 2018. If you want support in prioritizing, getting things done, and working more productively, give some consideration to joining the club and creating the change you want in your life.

You see, your work in the classroom is going to be challenging no matter what. The choices you make each day can either keep you in survival mode where you’re just treading water, or they can be helping you get ahead and make progress. Staying stuck in practices that are inefficient and ineffective is so draining that it’s really not any easier than making steps to create change.

Don’t wait! Future You will be grateful you didn’t. 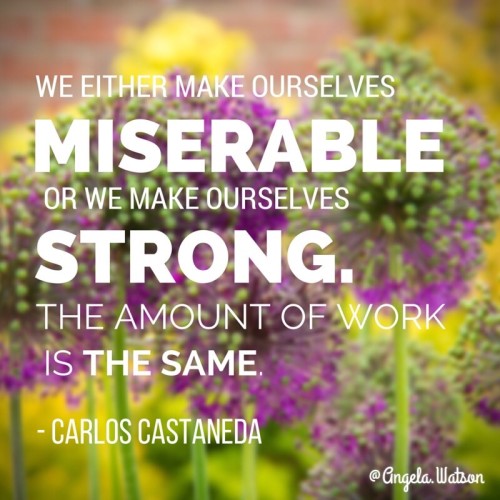 We either make ourselves miserable or strong. The amount of work is the same. (Carlos Castaneda) Click To Tweet

4 ways teachers can stop procrastinating and get things done