Home Truth For Teachers Podcast Getting real about grit: 6 things every teacher needs to know

Getting real about grit: 6 things every teacher needs to know

Getting real about grit: 6 things every teacher needs to know

“Grit” is a huge buzzword right now that’s used to refer to perseverance and resilience. Many schools are rushing to adopt grit curriculums and character education programs so they can teach their students about how to put in the effort and determination that’s needed in order to be successful.

But here’s the thing about grit. I’ve done a lot of research on this topic, and I’ve seen grit get a lot of pushback because it’s been misused and misinterpreted. And while I believe in the value of teaching grit to students, I think we as educators have the responsibility to be informed about what being “gritty” really means, and what it doesn’t mean. 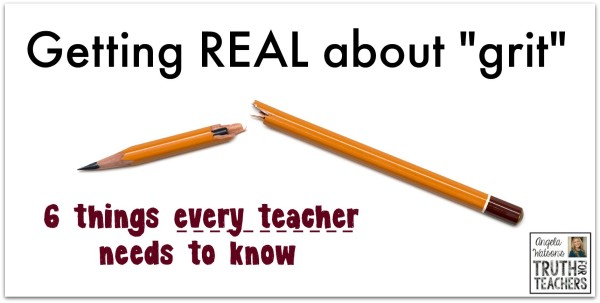 Let me first define what grit is NOT.

1. Grit is NOT an excuse for giving boring, inauthentic assignments.

We can’t photocopy a stack of multiple choice worksheets and call that our lesson, and then accuse students of not showing enough grit when they’re disengaged. We can’t fill the school day with busywork and rote learning and then blame kids’ lack of growth on the fact that they didn’t try hard enough. Grit is not supposed to be a guilt trip that places a burden on someone to complete meaningless tasks.

2. Grit is NOT a replacement for eradicating poverty, racism, and school funding inequities.

We have to be very careful not to use grit as a way to shift blame from our society or government onto students. We can’t say, “Hey, there’s one kid in your neighborhood who pulled himself up by his bootstraps and became a neurosurgeon! You’re just not trying hard enough — show some more grit!” This kind of attitude has been particularly pervasive toward students of color, as if all they need to do in order to be as successful as white children in upper-class neighborhoods is just work harder.

We cannot expect a nine or ten year old kid from a poor neighborhood to overcome things like lack of parental support and parental education, inadequate nutrition, an unsafe home and community environment, the damage that the stress of poverty does to the human brain, and any of the other challenges they might be facing … simply by showing grit.

We can’t take our responsibility, as adults, for eradicating poverty and place it back on little kids. We can’t blame children for not single-handedly overcoming the effects of poverty and racism through their own willpower.

3. Grit is NOT a replacement for actual learning.

For many years now, education experts have been training us to stop telling kids they’re smart and start praising effort and hard work. This is a positive shift, in my opinion, because it helps children develop a growth mindset and believe that success comes through hard work. But it can backfire if we send the message that hard work is the only thing that matters, and success is irrelevant. We can accidentally lead our children to believe that grit is more important than actual learning.

At some point, students and schools have to be accountable for whether or not they succeed in meeting goals. It’s not enough for a kid to try really hard to learn how to read if at the end of the year, the child is still reading on the same level as when she or he started.

We can’t take the feel-good route of using grit as a self-esteem builder: We can’t just praise grit without asking the hard questions about whether we as educators have supported students in meeting goals. Sure, the child showed perseverance and resilience and didn’t stop trying, but did he actually succeed? If he didn’t, why not? What can we do better as teachers to help him cross the finish line? How can we support the student not only in taking responsibility for his own efforts but his own learning? 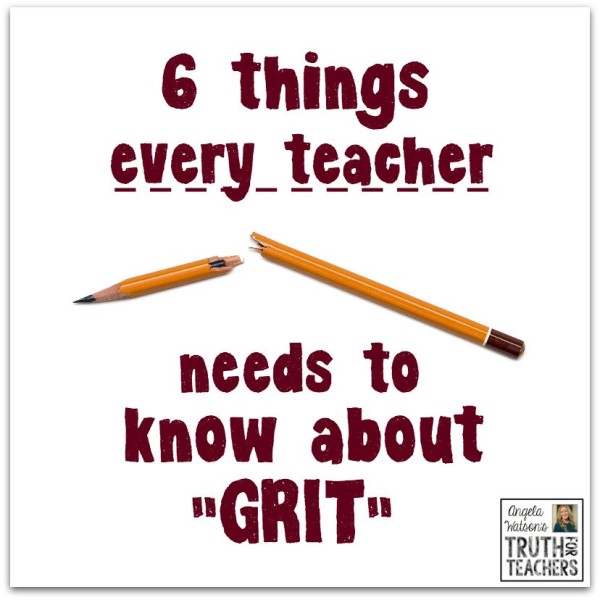 Now, let’s look at what real grit is all about.

1. Real grit is about high expectations.

While we can’t ask kids to overcome systemic societal issues using the sheer force of their own grit, we also can’t swing too far in the opposite direction and make excuses for our students. Low expectations are a subtle form of bigotry, where we don’t believe in kids’ ability to achieve simply because of who they are or the communities they come from. We can’t just feel pity for our students in poverty or kids with special needs or English language learners and decide that it’s enough for them to just do their best.

We have to believe that all children can learn, and be willing as a school community to figure out what supports they need and put them in place. Grit is about keeping high expectations. It means pushing yourself to do more and improve continually. We want to adopt that mindset ourselves, and teach that mindset to students.

Here’s a fact that I don’t often hear acknowledged in conversations about grit: Kids who live in affluent homes generally don’t have to exercise as much grit to be successful as kids who grow up in poverty.

I can testify to this firsthand. After many years teaching in urban Title I schools, I taught for a brief time in a more affluent community. In the affluent school, I quickly realized that most of my students were going to learn how to read and write and do math regardless of how well I taught them. They learned academic skills from a young age and came to school with a wide range of experiences and knowledge. If they weren’t successful in my classroom, their parents would have hired tutors, had them checked out by a pediatrician, or gotten them special services. Their parents helped them with their homework (or did the homework for them).

In other words, these affluent children had the privilege of some slack: They didn’t have to be “gritty” all the time because they had parental support and money and tons of resources to pick up the slack.

Slack is a term first used in this context by researchers Mullainathan and Shafir. They asserted that children who are raised in affluent homes and go to affluent schools live and learn with a mindset of abundance. These kids are afforded slack everywhere they turn; meaning, they have space to make mistakes and take risks and experience failure. They have people there to pick them up when they fall down and help them overcome the effects of their mistakes. They can rebound more easily from a lack of grit.

Children living in poverty operate in a space of scarcity: They live within tight margins and few choices. One wrong decision or momentary lapse in grit can have disastrous effects that last for a lifetime or even generations. They have far fewer opportunities and less access to the resources needed to be successful. Kids in poverty can’t afford to have an off-day.

So, many people would argue that it’s slack, not grit, that our students really need. I still contend that grit is an important skill to teach kids, but we have to do it while acknowledging the important role of slack, and recognize that slack is a privilege that not all of our kids have.

We can work to give our students some slack in the classroom in as many ways as possible, giving them opportunities to take risks, supporting them when they make mistakes, and helping them learn rebound from failures.

3. Real grit is nimble and knows when to shift course.

I was introduced to the idea of nimble grit by this year’s ASCD keynote speaker Sarah Lewis, author of The Rise: Creativity, the Gift of Failure, and the Search for Mastery. Sarah points out that grit is not about dogged persistence in tasks that are not worthwhile. Some things are not worth pursuing, and people who are true masters of their craft know when to quit, cut their losses, and move forward in another direction.

We need to teach kids that a gritty person does not pursue every task like a pitbull that latches on and refuses to let go. We have to show kids how to figure out when it’s okay to quit and help them understand which tasks are worth pursuing.

For example, I explicitly teach students that they don’t have to finish every book they start. Real readers give a book a fair chance, but if they’re not hooked after awhile, they decide the book isn’t a good fit for them right now and choose something else.

That’s nimble grit. Nimble grit is pursuing things that matter to you, and knowing when to pivot in a different direction so that your effort and hard work are going toward something that’s worthwhile.

I’ll leave you with one of the best and easiest ways I’ve found to teach kids about grit, and that is to give specific feedback that guides students to identify HOW they achieved success. Integrate grit vocabulary into your daily routines, and continually point out when students demonstrate those qualities.

You might say, “This was hard for you, but you persevered, and now you’ve almost got it!” or “You had a setback when your strategy didn’t work, but you found resources to help you. You showed a lot of resilience, and it paid off!”

You may even want to end the school day on a daily basis by having students turn and share ways they have shown grit that day (or struggled to show grit, and brainstorm strategies for doing better tomorrow.)

This post is based on the latest episode of my weekly podcast, Angela Watson’s Truth for Teachers. A podcast is like a free talk radio show you can listen to online, or download and take with you wherever you go. I release a new 10-15 minute episode each Sunday and feature it here on the blog to help you get energized and motivated for the week ahead. I’d love to hear your thoughts below in the comment section!

How to cultivate a growth mindset to enjoy teaching more