Home Articles A message for educators from Maya Angelou

A message for educators from Maya Angelou

A message for educators from Maya Angelou

As I mentioned in my last post about the ASCD conference in Chicago, the highlight of the weekend for me (and probably for most who attended) was hearing Maya Angelou speak. People started lining up outside the auditorium two hours before her keynote began, hoping to get as close as possible to the legendary poet-actress-playwright-producer-director-activist (and that’s the short list.) Chairs were set up for 10,000 people, and by the time I entered, nearly every single one was filled. This was by far the best-attended keynote I’ve ever attended at any conference. The energy in the room was palpable. 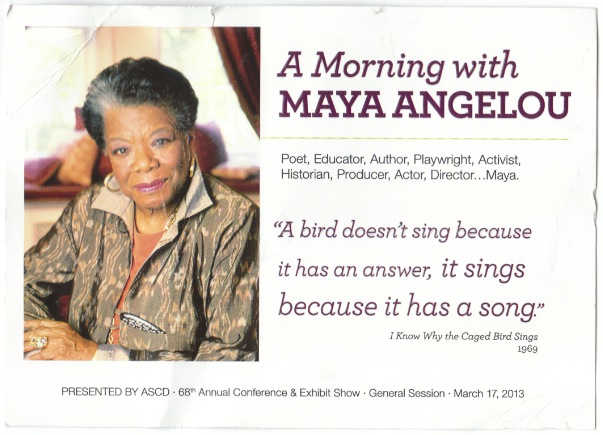 A card like the one pictured above had been placed on every seat in the auditorium, so before I even sat down, I was already feeling inspired and encouraged. The famous line from “I Know Why the Caged Bird Sings” reminds us that we don’t need to have all the answers in order to share our stories and gifts with the world: we can sing simply because we have a song.

Teachers, Maya explained to great applause, are the rainbows in the clouds. “You have enhanced the possibility of seeing light and opportunity in the lives of so many. I thank you for that.”

In her down-to-earth, effortlessly humorous style, Maya said that she is often asked “how I got to be who I am, and to be who I am for so long.” (She’ll celebrate her 85th birthday in April.)  “To quote Uncle Tom’s Cabin, I don’t know, I just growed. But the truth is, I had a lot of rainbows in my life. Black ones and white ones, fat ones and skinny ones, pretty ones and plain ones, gay ones and straight ones, rich ones and poor ones. All sorts of rainbows in my clouds.”

She told us about several important rainbows in her life, beginning with her uncle Willy. She described him as “poor, black, crippled, and living during the era of lynchings.” Disadvantaged in every way. And yet he taught her to memorize the times tables so she could work in the family’s store. She learned later on that her Uncle Willy has done the same for other children, including a young boy who  later became a mayor in Arkansas. Uncle Willy didn’t let his limitations keep him from teaching what he knew, and he was a rainbow in the clouds for countless others simply by doing what he could to give them opportunities and hope.

Another rainbow in Maya’s life was her mother. Maya was raped by her mom’s boyfriend when she was eight years old, and when she told her family what happened, the man turned up dead. “I thought my voice had killed him; I thought I killed that man, because I told his name. And then I thought I would never speak again, because my voice would kill anyone I named.” She became a selective mute for six years, talking to no one but her brother.

Her mother said to Maya one day when she was braiding her hair, “I don’t care if people think you are a moron because you can’t talk. I know that one day, you gonna be a teacher.” She believed in Maya even when others assumed her life would amount to nothing. “Now I have more than 70 doctorates. I m not bragging on myself, I’m bragging on the rainbows in my clouds. And now I’m here to entertain 10,000 other rainbows.”

Maya’s speech was short and simple, focusing on her “attitude of gratitude to all the men and women who were kind to me, who were rainbows in my clouds.” What I loved most about her time with us was that she was just herself. She spoke with truth and courage and power, but it wasn’t a rehearsed speech. She spoke from her heart. She spoke with wit and a natural, unrehearsed humor. Maya Angelou is a person who is not trying to be anything that she is not, or someone who seeks to impress. She just told her story, and told it her way.

You and I may not have endured all the things that Maya has, and we may not carry her charisma and easy charm. But we all have a story. We all have a message to share. And we can all be rainbows in the lives of everyone we come across, simply by letting our natural passions, humor, and personality shine through. Our students and colleagues may be in dark places right now, but we can be a glimmer of hope for them, a bit of light that gives them hope for the future.

All the stories Maya told remind us that our efforts don’t have to involve grand gestures: the simple act of believing in someone and not giving up on them can be life changing. The opportunity to do that is one that all of us can take advantage of each and every day, especially in our unique positions as educators. We can be the rainbows and give hope to our students when all they see around them is clouds. I am so grateful to Maya Angelou for sharing that message and for being a rainbow for us as educators.