When parents want to move their child to another classroom

When parents want to move their child to another classroom

Having a parent ask to move a child to a different classroom can be a huge blow to a teacher’s confidence. And it’s an issue that nearly every educator will face at some point–if not at multiple points–in their career. Sometime parents don’t like the fact that you are forcing them to address issues they’ve tried to sweep under the rug. Other times it’ s a personality conflict, a disagreement over your teaching style, or simply an attempt to get their child into the classroom of a teacher they think will do a better job.

Regardless of the reason, a parent requesting to have a student transferred to another classroom is enough to shake any teacher’s morale. Here are 6 strategies to help you handle the situation effectively:

Consider the element of truth in the parent’s criticism and disregard the rest.

Think deeply about your teaching practice. What is the heart of the issue that the parent is complaining about? On what points is she or he correct? Everyone has skills which they can improve, and if the parent has identified some legitimately weak areas of your teaching, you owe it to yourself and your students to consider that. Discern for yourself which pieces of information are insults/exaggerations and which pieces have an element of truth that needs to be dealt with. Don’t get so caught up in being offended that you miss the opportunity to reflect on your teaching and improve it.

Don’t go on the defensive.

The first time a room change is mentioned, you might want to try smoothing things over: “I really love having __ in my classroom, and she’s adjusted really well and made some great friends. I’d love to keep her in my room. I feel confident we can come up with a solution together and move forward.” But if the parent is insistent, don’t fight tooth and nail over every complaint. Resist the urge to call the parent or write a 5 page letter defending yourself. Tell yourself, This parent thinks the child will do better in another classroom, and he has the right to think that. I wish the family the best. I’m moving on and focusing on the needs of the kids who are still in my room. 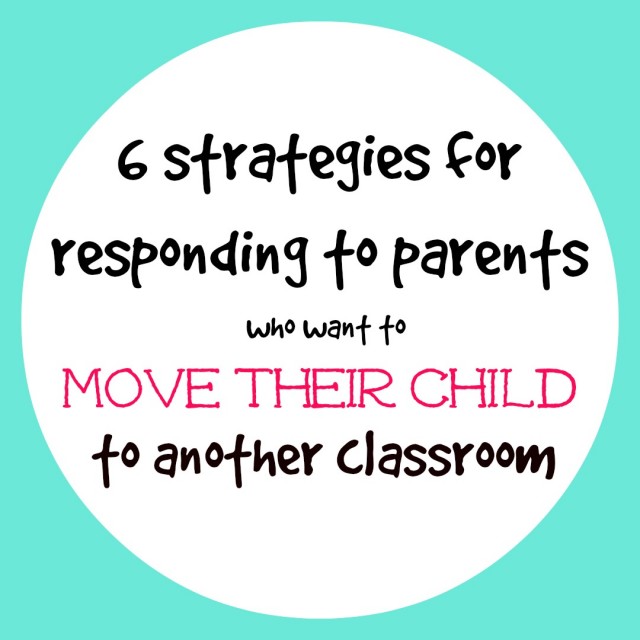 Remember that the parent truly believes s/he is acting in the child’s best interests.

In Awakened: Change Your Mindset to Transform Your Teaching, I wrote a lot about the principle of separate realities. Other people will never the see world as we do, because they haven’t had all the same experiences we’ve had. That means trying to understand why they “don’t get it” will result in frustration every time because we each truly live in a separate reality. If a parent is requesting that his child be moved to another classroom, it’s because he sincerely believes that his or her child would be more successful there. You don’t have to agree with his position, but if you understand that the parent believes it deeply and is trying to advocate for the child, it’s easier to accept.

Don’t tell everyone in the school about what happened. Don’t repeat the incident to all your friends, your spouse, your mom, and your neighbor. Don’t think about it, and don’t talk about it. The less you allow thoughts about negative situations to stay in your mind, the fuzzier your memories become, and the weaker your attached emotions get. Each time you are tempted to replay what happen, say to yourself, It’s over. I’m choosing not to think about that anymore.

Accept the fact that some parents are never going to like you.

I wish someone had told me that when I started teaching. I thought if I worked hard enough, they’d have no choice but to love me. But every year, I had at least one parent who gave me a hard time about pretty much everything, questioned my every move, and basically made me feel incompetent. No matter how accommodating I was, there was always a parent I could. not. please. Once I accepted that reality, it was a lot easier to handle. Instead of thinking, Why am I not good enough for her? I would think, There is no law of the universe stating that every parent is going to like me. This year, she is the parent who does not. That’s okay. It makes my job a little harder, but it won’t deter me from doing my very best each and every day.

Focus on the affirmations you’ve received, not the criticisms.

If the majority of your students’ parents think you’re doing a good job, why should you give one naysayer the power to destroy your self-esteem for the rest of the year? Reflect on and plan for areas that need improvement, but don’t replay your faults over and over. It’s human nature to put more weight on criticism than compliments, so we have to actively fight that tendency. At the end of each school day, make a mental (or written) list of all the things that went right and all the successes you had with kids and their families. Don’t lose sight of the progress both you and your students make throughout the year as you learn from your experiences. Repeat those small wins to yourself when you feel discouraged.

Have you had parents request to transfer their children to another teacher’s classroom? How did you handle it?