It’s day 3 of winter break, and my classroom is a thousand miles away (both literally and figuratively, as I am SO not thinking about work during these two weeks in NYC with my fiancee!). I’m happily diving into the pile of books which have accumulated on my nightstand since Thanksgiving. This particular read did actually make me think about teaching, but since it was such a page-turner, I’ll overlook that fact and recommend it for your leisure time, anyway. 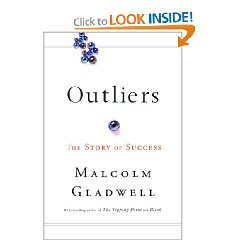 Malcolm Gladwell has recently attracted attention for his New Yorker article Most Likely to Succeed, in which he questions how an employer (be it a football scout or a school principal) can tell if a candidate will be successful on the job. In the end, Gladwell identifies withitness as being a critical factor in teacher success. I didn’t find this fact particularly earth shattering, considering that the term was included in a multiple choice test question I answered in a 1996 undergraduate course.

What did have a far-reaching impact on my perspective of education was Gladwell’s latest book.

Outliers is a fascinating and surprisingly easy read, considering the complexity of the topic. Gladwell disaggregates data on a variety of seemingly unrelated themes (yes, I’m a huge nerd for loving this) and weaves it into a suspenseful narrative. His critics complain that Gladwell’s points are less than well-substantiated, but those accusations don’t undermine the reasonable evidence that supports his ideas, nor do they detract from the compelling nature of the patterns Gladwell exposes (which are, without exception, thought-provoking).

Gladwell’s purpose in Outliers is to contrast how success has been perceived culturally with the factors that actually contribute to becoming successful. His examples are not always intended to have educational implications, such as the chapter on why certain airlines have higher crash rates than others (would you believe, the culturally-based deferential treatment of the captain by the first officer? Fascinating.) But nearly every chapter inadvertently caused me to re-evaluate our educational norms and expectations.

For example, Gladwell establishes in the beginning of the book how children are punished by the age cut-offs established by school systems (students born right before the cut-off will lag behind their peers who are nearly a year older, and have to compensate for their disadvantage all the way through high school). It is inherently unfair to expect a child who is 7.1 years old to read at the same level as a child who is 7.10. This is a self-evident fact, yet few (beyond the Montessori movement) have taken any real steps to correct this problem. As a result, we set up children for years of struggle and failure based solely on the month in which they were born.

Gladwell also notes how the differences in parenting styles affect success. This is a well-known fact, especially among those of us who work with children, but the Outliers interpretation offers some considerations which are difficult for us to quantify and express:

The middle-class parenting style is typically one of ‘concerted cultivation’, an attempt to actively foster and assess a child’s talents, opinions, and skills. Poor parents tend to follow, by contrast, a strategy of ‘accomplishment of natural growth’. They see as their responsibility to care for their children but to let them grow and develop on their own (skills and interests are character traits which make the child who s/he is, not as a signal to look for other ways to develop that interest into a formal talent).

But perhaps the most important chapter for educators appears at the end of the book. Gladwell analyzes data showing the gains that upper class children make during the long summer vacation each year and charts the losses that lower class children suffer. The contrast is impossible to ignore: children from wealthy families benefit from concerted cultivation for two and a half months, while poor children languish in the front of the TV day after day after day. While Gladwell only analyzes data from Baltimore city schools, I’d be highly surprised if different conclusions could be drawn from any other studies:

An enormous amount of time is spent talking about reducing class size, rewriting curricula, buying every student a shiny new laptop, and increasing school funding–all of which assumes that there is something fundamentally wrong with the job that schools are doing. But look back at the second table [of Baltimore City data], which shows what happens between September and June. Schools work. The only problem with school, for the kids who aren’t achieving, is that there isn’t enough of it.

This is a consideration which would revolutionize American education: the abolishment of summer vacation under the premise that children will learn more if they’re provided with enough of the right opportunities. Imagine diverting funds from endless assessment and swinging pendulum reform initiatives, and using that money to employ teachers for an extra six weeks of best-practice instruction every year. What would YOUR students know if you had an extra 210 hours to teach them?

Whether or not you believe whole-heartedly in the legitimacy of the patterns Gladwell has pieced together, there are clearly some legitimate points which are worthy of our consideration. Outliers will challenge you to consider the factors that are working for and against the success of our students. As Gladwell explains,

Because we so profoundly personalize success, we miss opportunities to lift others onto the top rung. We make rules that frustrate achievement. We prematurely write people off as failures. We are too much in awe of those who succeed and far too dismissive of those who fail. And, most of all, we become much too passive. We overlook just how large a role we all play–and by “we” I mean society–in determining who makes it and who doesn’t.