How I Created Multiple Intelligences Centers

How I Created Multiple Intelligences Centers 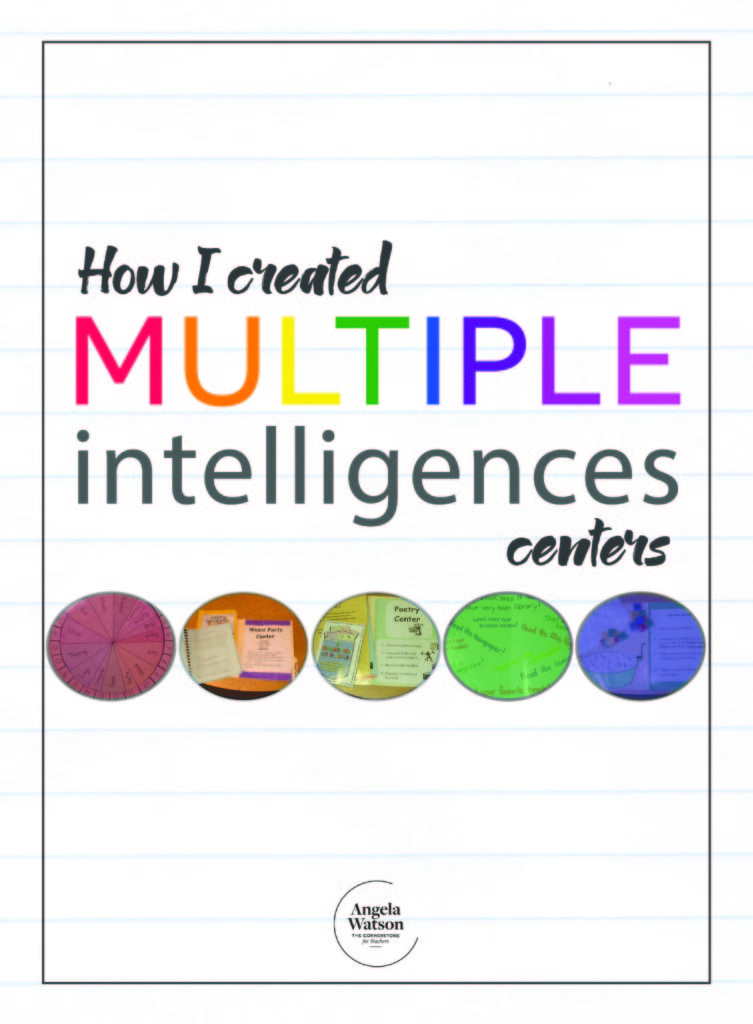 How I created multiple intelligences centers

One year, I based my centers on Howard Gardner’s MI theory (the idea that everyone is smart in a variety of ways, not just those traditionally valued by schools).  I was inspired to do this because I was taking over the Talented and Gifted students for the third grade and wanted to try some new ways to differentiate centers so both my gifted and below-grade-level students would be accommodated.

At the beginning of the year, I gave the kids a Multiple Intelligence Survey so they would become more aware of their learning style and strengths.  After completing the survey, they graphed their different strengths and wrote about how they learn best.

Most of the centers focused on literacy skills, especially spelling (which encompassed a variety of skills that I would later come to call Word Work.) I designed the centers so that students would practice the same basic skills each day, but in different ways depending on which center they were using.  For example, in a Bodily-Kinesthetic center, students might lay on the floor and do 3-D rubbings of their spelling words, while in a Logical Mathematical center, they may do a word join like the game Scrabble using their spelling words.  Within the center for each type of intelligence, there were several activity choices so students could never claim to be “done” with a center or complain they had already completed everything there. 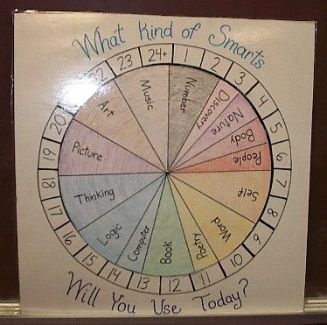 When they began using centers in late September, I assigned a different area to each child each day. This way, we could practice the routines and children could familiarize themselves with all the materials and tasks. The spinning wheel (attached to the poster board with a brad) in the photo to the left shows how the rotation works. Every student was assigned a number (which was used in many elements of our classroom). So for example, on the day shown in the photo, students #1 and 2 would go to Number Smart, student #3 would go to Discovery Smart, etc. Since there were more students than centers, I allowed two students to use one center at a time, which worked fine since there were a variety of materials within each. Having two days in a row for some centers also enabled children to go more in-depth with the tasks. Later in the school year, I intended to give more element of choice with the centers so students could practice their skills in ways that corresponded with their personal intelligences, but found that this structure was very successful and used it the majority of the time.

Students kept their work in a composition book which I checked periodically. They were not assessed on the centers because the primary purpose was practice. Since it took 6-8 weeks for students to do the full center rotation, I only changed the materials about once per quarter.  As a result, this system was very easy to maintain!

The photos below show my centers divided by the type of intelligence they utilize.  The top line in each heading uses the technical name of the intelligence devised by Howard Gardner. The line underneath contains the sub-categories that I used because they’re in kid-friendly terms. You can click any photo to enlarge it.

Another Music Smart center uses a times tables cassette tape.  Students listen to the math facts being sung on tape while following along with the lyrics on paper or just closing their eyes and listening.  After the song ends, they write the times table that they just heard on the tape.  They repeat for as many songs as they have time for.

Another Word Smart center is Magnetic Poetry, which provides sentence structure and parts of speech practice. You can find that on the Easy & Creative Centers page.

Other Bodily-Kinesthetic centers use books with manipulatives. I used a Hershey fraction book (with brown construction paper photocopies of the chocolate bar sections) and a Valentine candy heart multiplication/division book (with real candy hearts that students know are very old and not edible!). I don’t think the candy heart book is still in print, but there are other similar books that can be used for great hands-on math practice activities.

Another People Smart center involves autobiographies and biographies, and students are asked to reflect on the character’s lives and often their own.  I discuss the concept of using children’s books as centers on the Ideas for Free Centers page.