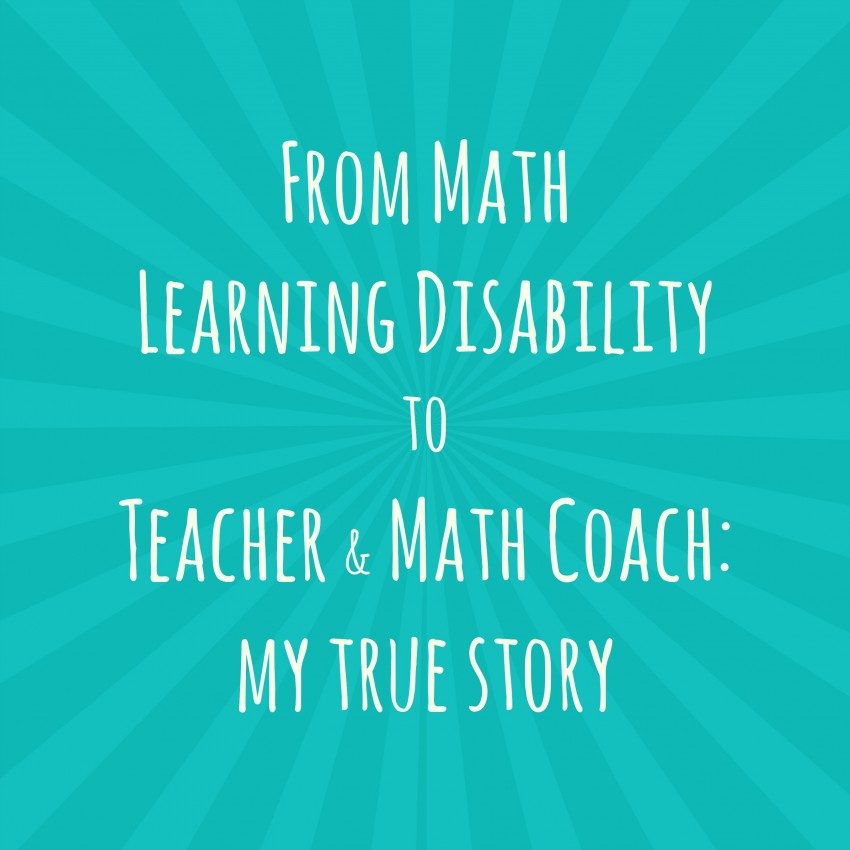 I could tell the story of an anonymous child who was diagnosed with a learning disability and later became a teacher and math instructional coach, then do a big reveal at the end (THAT STUDENT WAS ME!!1!1!) but I’ll skip the drama and tell you you upfront. Yes, that student was me. Here’s what happened.

Hate is probably not a strong enough word to describe how I felt about math when I was little. Math pained me. It made no sense. There was only one right answer to every problem and I never knew what it was. Math required attention to detail, and one little mistake made the entire thing WRONG.

Now writing? That was a different story. There I had the freedom to be creative, to think of new ways of doing things, to share my ideas and use words. Numbers I hated but words I loved. Writing them, reading them…I was devouring “Harriet the Spy” as a kindergartener. Words meant possibility and imagination. They could not have been more opposite of math.

I remember sobbing at the dining room table with my father as he drilled me on multiplication facts with a set of flashcards he made himself. I was in sixth grade, and my teachers were annoyed that I had still not disciplined myself to memorize basic math facts. It had become impossible for me to keep up with the rest of the class as as we did five digit multiplication problems. My dad would patiently flip through those flash cards over and over and over, and I’d struggle and cry and beg to do something else. It was torture for both of us, but if my father hadn’t made me do it, I probably wouldn’t know my multiplication tables today.

We had been living in Norway (my dad was in the army) and there were no special education services at my school, but when we returned to the U.S. and I entered ninth grade, I was immediately diagnosed with dyscalculia, a learning disability in math. I recieved accommodations for the first time, but I already hated math so much, and I had entered my rebellious teenage years. I skipped class, played around, and generally put forth so little effort that I got an F in algebra.

My parents pulled me out of public school and sent me to a tiny private school where I couldn’t get away with those kind of behaviors. It’s a good thing they did (it’s doubtful that I would have shaped up and gotten into college otherwise) but my private school had no special education programs. So I was back where I started in terms of math: sitting in a general education classroom, completely lost and basically doing whatever it took to slide by and hope that my grades in my other subjects would allow me to get into college where I could take courses that actually interested me.

It worked, somehow. I was accepted into a small liberal arts college where I enrolled as an Early Childhood Education major. I loved having the freedom to choose my courses and schedule and enjoyed the self-paced structure of college in general, and had no trouble maintaining a 3.8 GPA. I was required to take one math course–and only one, thank God. I selected some sort of computer-based course taught by a professor who realized he had a group of math phobic 18 year olds and treated us kindly. He gave me a B, and I was ecstatic.

I dove into my teaching methods courses during my sophomore year, thrilled to be taking classes I was truly interested in. All these years of suffering through irrelevant, boring courses to finally get to THIS! I was a bit apprehensive about the math methods class but figured I could handle it–after all, I was an early childhood education major. How hard could it be to learn about teaching 2+2, right?

In one of our first math methods classes, the professor had us all sit in groups and dumped a container of counters on the table between us. I’d never used them before in my life.

Someone in the back called out, “3×3=9″ and my jaw almost hit the floor. My eyes shot down to my manipulatives. Oh my ... 3 groups of 3 … that’s multiplication?? THAT’S what 3×3 means? What the … Multiplication MEANS something?! It’s not just a bunch of facts to memorize! WHAT?!  The hallelujah chorus started playing, unicorns with rainbow tails flitted around the room, etc. etc.

But my euphoria was suddenly eclipsed by panic. Wait a second, I’m 19 years old and I just now figured out what multiplication is? I’m such an idiot. They weren’t kidding when they told me I have a math learning disability. I am so embarrassed–

I looked slowly over to my right, and was stunned to see the girl sitting next to me marveling at her manipulatives, too. “I never realized this before! These counters are great!”

The girl across the table nodded in agreement. “I didn’t want to say anything, but that’s the first time I really got it, too. WOW.” And the three of us sat there exchanging glances like the whole world had figured out that Ben Linus had moved the island and we were still down in the hatch pushing a button every 108 seconds.

That math methods course changed my life. Or maybe I should say that base ten blocks changed my life. As I traded in ten ones for a ten rod, and ten tens for a hundreds block, I realized for the first time what place value and number sense were all about. Multiple digit addition and subtraction made sense beyond a rote process I had memorized. The secret to numbers was unlocked for me. I finally got it.

I was ready to teach math to bunch of little kids, but it took a few years for me to stop being scared of math in my own life. Even after graduating from college, I acted as if I were incapable of balancing a checkbook and just hoped the numbers would somehow work themselves out every month. I insisted on using a calculator to solve even the simplest problem. I flipped through my mortgage papers blankly, assuming I wouldn’t be able to understand the math and not really bothering to try.

But the longer I was a teacher, the more I realized that I didn’t hate math. I wasn’t bad at it. And figuring out math problems wasn’t some secret than only other people could understand. In fact, words and math? They can actually go together. There IS more than one right answer in math, or at least, more than one way to arrive at an answer. Math could be fun. It could be creative. It could make sense. It could have meaning.

By my sixth year of teaching, I made it my personal mission to retrain every child in my class who hated math. “By the end of the school year, you will LOVE math. I guarantee it,” I’d proclaim boldly the first week of school. And my students did love math, for the most part. They might have hated the worksheets and the test prep crap I was required to give them, but they didn’t hate math. And equally importantly–they understood it and felt capable of mastering it.

I became a math coach after eleven years of teaching. It was in many ways a dream come true. The younger teachers I’ve worked with have (mostly) had experience with manipulatives in school or at least in college–they’re wonderful. But I really love working with older teachers who were trained to use paper and pencil activities like I used when I was little. Watching these veteran teachers have the same “aha” moment I had the first time I was taught to use manipulatives? Amazing. And seeing that “aha” moment transform the way they teach math to their students? Priceless.

Please don’t take this story the wrong way: I don’t mean to trivialize learning disabilities or in any way insinuate that everyone with dyscalculia can be “cured” just by playing with manipulatives. Fear of math is a real thing. Overcoming it and re-learning fundamental math concepts took years. Complex math concepts are still not my forté.  I just want to share my story to let those who hate math, don’t “get” math, or have learning disabilities in math know that they’re not the only ones, and they can still have successful, fulfilling careers. I also wanted to share this to encourage teachers and parents not to give up on math phobic kids–you never know when things will just click for a child, and all that hard work will pay off.

Math became one of my favorite subjects to teach, and I want to share things and create materials that make it easier for other teachers to enjoy it, too. I also want to make math less painful for kids. I don’t want any child to sit sobbing at the dining room table while struggling to memorize rote facts like I did. I want to spread the word: math is fun, math means something, and math is relevant to your life. I had no idea just how relevant it would one day become to mine.

What were your experiences with math when you were in school? How does that affect the way you feel about (and teach) math today?