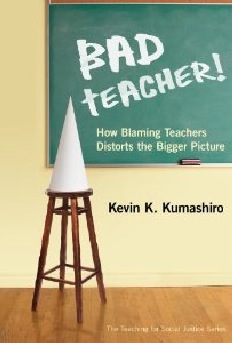 I had the pleasure of hearing Kevin K. Kumsahiro speak at the ASCD conference last March, and knew immediately that I’d want to read his book, Bad Teacher: How Blaming Teachers Distorts the Bigger Picture. This is such an important topic, and teachers desperately need someone to speak up on their behalf.

The scapegoating of public school teachers in America is a complex topic, and I have to admit, this is a complex book that I sometimes had trouble following. At only 90 pages, I figured I could skim through it one morning on the subway and get the gist. Not so. Bad Teacher requires a lot of intense concentration. I pushed through it because I believe in the heart of Kumashiro’s message, and I think in Bad Teacher, he’s provided a very comprehensive explanation of how and why the reputation of America’s teachers has disintegrated.

The idea that American public schools are failing and that the solution is to get rid of “bad” teachers is something that’s debunked right in the foreword:

Let’s say we did fire all the bad teachers, however defined or described. What then? Did classes suddenly become smaller, schools better-resourced? Is outdoor playtime now in place and obesity a thing of the past? Are kids now focused and engaged? Is poverty eliminated and health insurance available to them? Are guns and drugs out of their communities, and their local libraries open every day?…One counterpoint would be to ask a different set of questions: what makes a good teacher; what qualities constitute goodness in teaching; what policies would promote the good? Perhaps rather than an exclusive and anemic focus on the “bad”, we should invest resources, intellectual effort, and energy on promoting and supporting the good.

Kumashiro addresses the fact that most efforts to improve schools have the opposite effect. “Under current reforms, the more students struggle, the less their schools are allowed to teach, and the less they are made to look like flourishing school systems in this country and to other nations. In other words, current reforms are making even more substantial the differences between schools for the elite and schools for all others.” Kumashiro goes on to explain how reform is fear-based, and would not be occurring without a sense of crisis that has been created by those in positions of power. Fear is what drives the standardized testing movement, “which in turn, creates opportunity for profit.”

This monetization of the education system is addressed head on in the book. In the media, criticism rarely seems to fall on curriculum manufacturers, creators of standardized tests, and others who stand to make a profit from school reform. So instead, the story of American’s failing schools is blamed on a lack of effort on the part of teachers and schools. Policy and legislative changes reinforce this: “Gains in student achievement are not sufficient? Create incentives to make teachers work harder, work smarter, and innovate their way to success, all the while regulating and monitoring them. Schools are still failing? Get rid of those teachers.”

It was evident to me throughout the book that Kumashiro leans to the left politically, and though I personally agreed with most of his views, I think his arguments would have been stronger had he taken a more unbiased approach. I got a bit lost in the section on homeschooling, particularly around the “re-Christianization of teaching” and the “feminization of teaching” as a threat to public schooling. I didn’t find those arguments convincing, but I’m largely unfamiliar with those two phrases and would like to do some more research so I can form my own opinion.

Overall, though, Bad Teacher is a worthwhile read for anyone who is concerned about the vilification of the public school teacher. I really appreciate that Kumashiro is not afraid to speak the truth as he sees it about what’s really driving school reform. He’s tackled the topic from many different angles and provides a very comprehensive look at the topic. Kumashiro’s consistently pro-teacher stance is refreshing, and extremely validating for all the teachers who have been left scratching their heads these last few years, wondering when they became the enemy and why they’re not allowed to teach anymore. We can only create workable solutions when we understand the root of the problem, and Bad Teacher is a terrific resource for examining the big picture.

Teacher’s College Press has offered to give away a copy of Bad Teacher: How Blaming Teachers Distorts the Bigger Picture to one reader of The Cornerstone.  Use the Rafflecopter giveaway below to enter. Contest closes at midnight EST on Monday, October 21st, 2013. Good luck!
a Rafflecopter giveaway