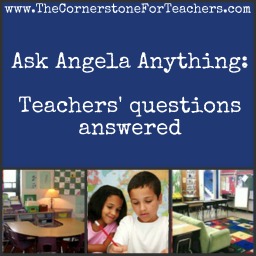 Welcome to this month’s edition of the monthly post series in which I answer readers’ frequently-asked questions. Although I do respond personally to every email, with this series, you can submit any teaching-related question anonymously to maintain your privacy and student confidentiality. I’ve called the series “Ask Angela Anything” because I share what has worked for me in my own classroom and in the rooms of the teachers I coach. My personal philosophy is that there’s no one “right” solution that works for every child in every classroom: I encourage you to adapt the ideas I share for your own situation.

When my students line up after recess the line is a distaster – kids bouncing balls, turned around talking, even chasing each other. One of the problems is that the teachers here are pretty lax so it is one big chaotic clump of grade 2 and 3 students altogether. It’s hard for my students to stand in a line when they see three other classes not following procedure. I have tried practicing many, many times, making the students go back and try again, even making them line up nicely for a few minutes at recess (I hate giving whole class punishments but almost every student is not following procedure). They don’t even respond when I mention they’re missing P.E., or library etc. I’m kind of at my wit’s end here because I don’t want to give up and let them “win” and have a disorganized line, but I am sick of spending so much time and energy on lining up.
–Karen

Hi, Karen! I, too, was extremely frustrated by how long it took my students to line up and settle down after recess, and tried pretty much everything. I thought maybe blowing the whistle earlier would help because they’d have more time to get themselves together, but that actually made it worse, because the longer they stood there, the crazier things got. Eventually I decided to making lining up a 30 second process and stuck to it. I talked to the kids about the problem I’d noticed, and then took them outside when the playground was empty to practice lining up. I let them play for two minutes, blew the whistle, and gave them feedback (following the steps I use for teaching any procedure). We did it once or twice more to help them internalize the expectation.

From then on whenever recess was over, I blew the whistle, gave the kids thirty seconds to line up, and starting walking inside. That left them no time to play around, and they learned they’d better come right away or they’d get left behind. (Obviously they wouldn’t be unsupervised because I was still outside, but most kids want to be with the class and would run to catch up to their friends.) The line was usually really chatty at that point, but at least we were moving to a quieter area where it would be easier to get them settled down. We’d walk to the building entrance (giving stragglers time to join us) and I’d stand at the door, giving the signal for entering quietly. The line was still kind of noisy, but each student gave me the quiet signal as s/he passed through the doorway, so that was the moment when they finally settled down for the most part.

I don’t think lining up after recess will ever be anyone’s shining example of how well their students follow directions, but I also don’t think it’s a huge deal in the big scheme of things. When I stopped making a big production of it and getting so annoyed, things got better. Blow the whistle, wait thirty seconds, walk to the door, give students the quiet signal as they pass through the doorway, done. Maybe in your situation, you can take your class in a minute earlier or later than the other classes so that they’re not all lining up together, and you can move things along more quickly.

How do you deal with crabby teachers who are mean to students and will not help other teachers?
–Alma

Hi, Alma! Those kind of teachers are very, very frustrating to work with, and give the rest of us a bad name. The ones that I’ve encountered who are like that really need to find work in another field–they’re burned out, they don’t want to try anything new and are resistant to change, and they’re nasty and impatient with kids. As their colleague, you can’t force those teachers to retire or resign, but you can help them hate their jobs a little less. Instinctively, I’m sure you don’t want to help them at all, but the less miserable they feel at work, the less they’ll take that misery out on you and their students.

My advice is to take the high road: continue to share your ideas even if they don’t reciprocate, and choose not to be insulted they don’t use the resources you’ve shared. To keep their negativity from rubbing off on you, spend time with them only when you have to–sit at the other end of the teacher’s lounge at lunch if needed. When you do talk with them, make an effort to say as many nice things about your students as possible. Every time they say something rude about their students, counter it with a sweet anecdote. You can co-conspire with another concerned colleague to do this so you have some back up. Eventually, the meanies at your school will realize that you’re not going to sink into complaining mode with them, and through your positive outlook, they’ll hopefully get a reminder of why they went into teaching in the first place.

I am thinking about quitting for the same reasons you mentioned in your post Why I Quit Teaching Mid-Year. When you submitted your letter of resignation and spoke with your principal what did you say was your reason for leaving? I many want to work in another district and don’t want a bad reference.
–Maureen

Great question, Maureen. I don’t recall having to give a specific reason in writing–I think there were boxes I had to check, and I picked one that said “personal reasons” or something else innocuous. When I spoke to the principal, I kept the conversation focused on me rather than the school. I told her *I* needed to work in a school in which I felt safe and I knew my students would be safe. She argued that the school WAS safe, but I told her I didn’t feel that way, and for the sake of my health, I needed to work in a less stressful environment. She pressed me on that, but I told her this was a decision I needed to make to take care of myself, and that was that. It was an incredibly uncomfortable situation, for sure, but once she was satisfied that she wasn’t going to get me to stay, it ended pretty quickly.

When interviewing for another position, I was even more succinct in my reasoning. I knew that the area I had been teaching in had a reputation for violence and the principal probably had a pretty good idea of why I wanted to transfer. My goal was to say as little as possible about the old school, so I said something to the effect of, “I need to work in a school in which I feel safe and I know my students are safe. Your school has a reputation for being a great place for teachers and kids, and I think it will be a much better fit for me.” That second sentence shifted the focus to the school I was interviewing at, and the principal said, “Of course!” and started talking about their suspension rates, number of violent acts, etc. (which was a HUGE improvement over where I’d been). I don’t think a teacher can be faulted for caring about her personal safety and that of her students, and I hope that proves true for you, as well.

I am definitely ready to leave the classroom. Preferred position would be with the school district in a management role.
–AnnSF

I have been teaching successfully for 18 years. Need a change asap before I lose myself. Any suggestion where to go? How did you come across your current position? Are you hiring :)?
–Nicky

I get TONS of emails from teachers who want advice on how to transition out of the classroom into another role in education. I’m pretty much a one-woman show so, nope, I’m not hiring! But I created the Edupreneur section of my website to share my story and tips for others.  The Becoming an Educational Consultant page has a lot of advice that I think applies to work in other areas of education–there are also tips for establishing yourself as an expert in the field, which is key if you want to move into another role.

The page also has advice on how to look online for non-teaching jobs in the education field. I think that’s the best place to start so you can see what the possibilities are. You might find that what you want to do exists, but maybe not in your area, so search nationwide just to get a feel for what’s out there. You can also think about creating the position yourself–figure out what you really love to do and work from there to make it happen! That’s pretty much the route that I took, and continue to take as my role shifts over time.

If you want to work in a non-teaching position within a school district, you’ll need to check the school system’s job openings, which are usually found on a special district site or web page designed for that purpose. In my experience, those openings go to people who have connections within the district, so networking and getting good recommendations is critical.

Do you have advice for any of the teachers above? Please share your experiences in the comments!

And if you have a topic you’d like to see addressed in a future “Ask Angela Anything” post, submit your question here! Your entries are completely anonymous, so ask ANYTHING you’ve ever wanted to know about teaching but were afraid to ask.