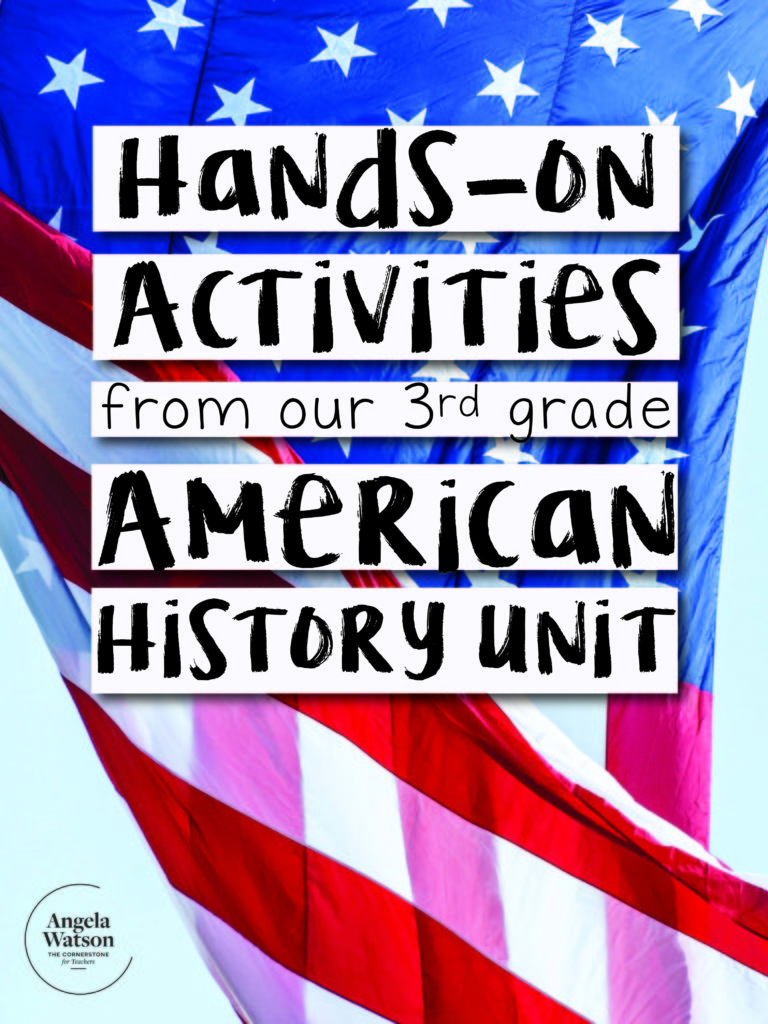 This pages shares ideas for making U.S. history interesting and relevant to kids. You’ll find the American history unit I designed, along with free downloads for web quests, cooperative projects, and other activities you adapt for your class!

How I created our U.S. History unit 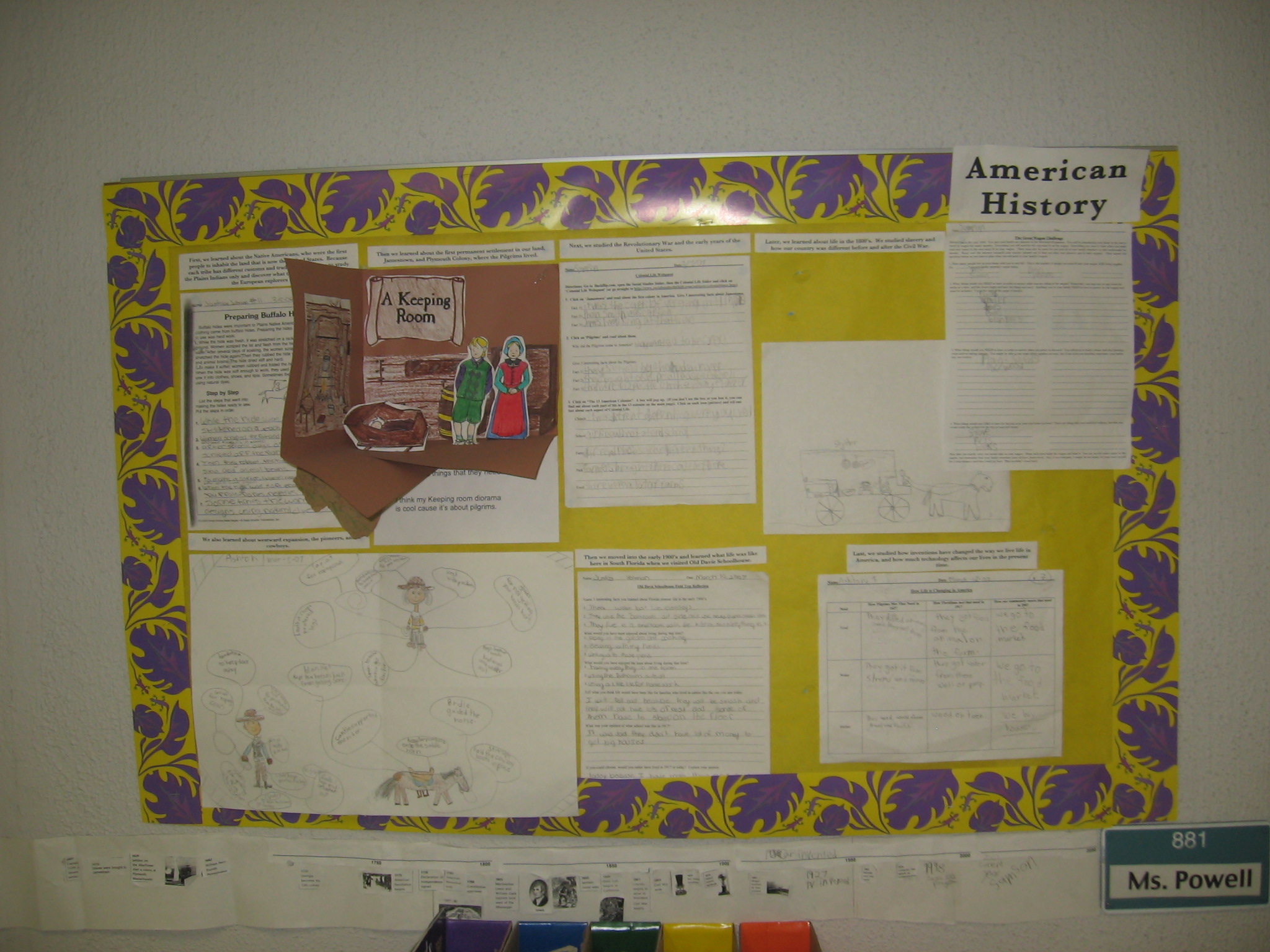 This bulletin board is not beautiful.  I will admit that. However, it’s the only hallway space I had one year to showcase what my class was learning, and it was extremely effective!  I chose one or two work samples for each time period in American history and typed up a quick caption about what we did, then stapled the caption above the projects. Underneath was a timeline the kids created in pairs using chart strips and important dates/images I provided. It was a great way to share what we were learning with parents and classroom visitors, and the kids often read and talked about it in the mornings while waiting to enter the classroom. Our American history unit was one I designed myself, since our social studies book was sorely lacking meaningful and interesting information.  I’ll explain a little bit about the unit using the bulletin board as a reference point. 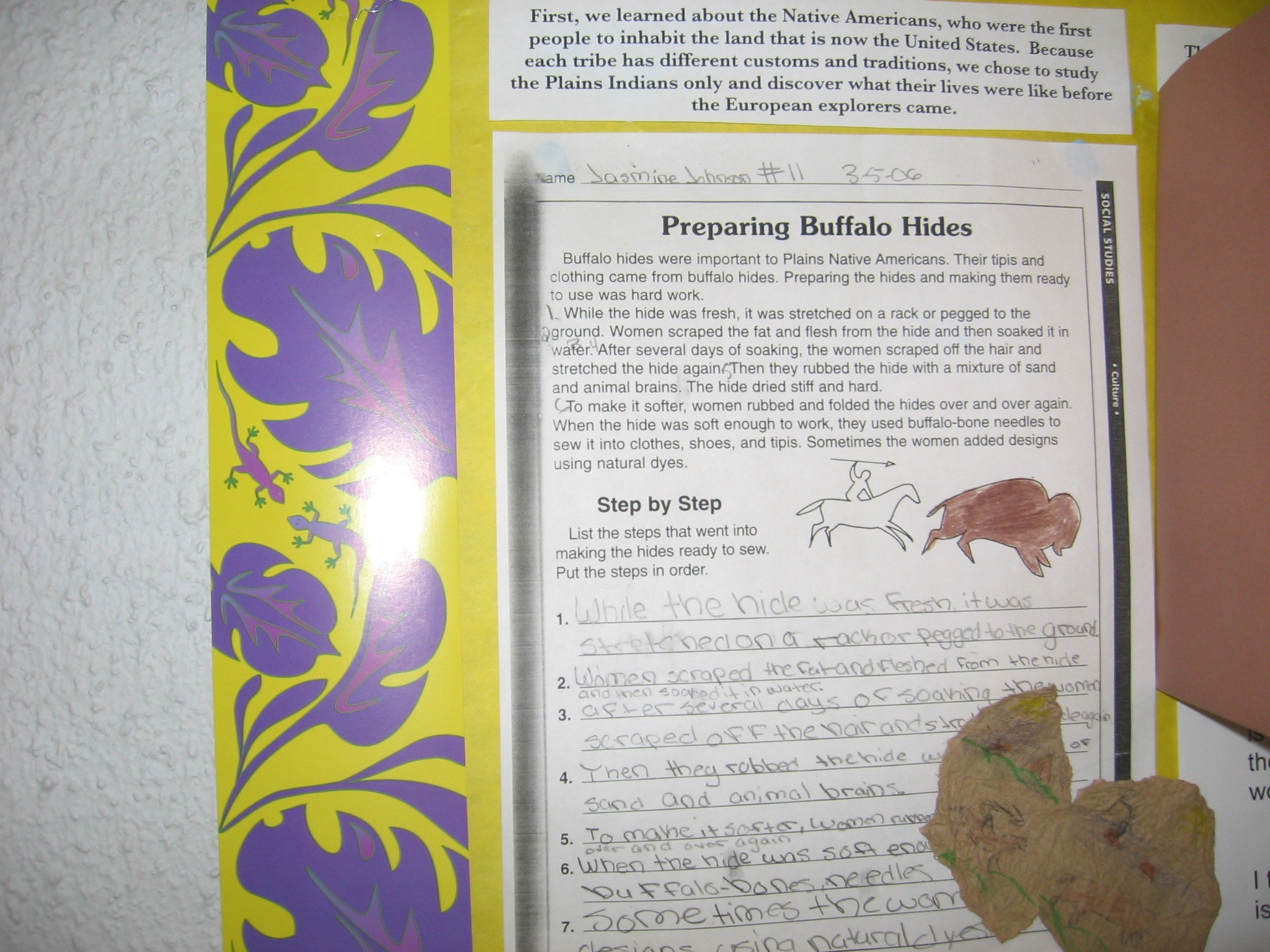 The unit began with an emphasis on Native American cultures.  I really stressed to students that America was not ‘discovered’ in the truest sense of the word: people were already living here for thousands of years before the Europeans found it.  I also emphasized that the native peoples had different lifestyles depending on their location within the continent (much like today), and that our activities would be reflective of the Plains Indians way of life. Since buffalo were very important to tribes in that region, we used the worksheet and buffalo hides craft from Social Studies Made Simple Grade 3 teaching resource book (which I got for just a few dollars on eBay).  We wet paper bags and crumpled them up repeatedly so they would be soft like real animal hides.  While we waited for them to dry, we did the worksheet together, then the children drew or painted scenes typical of those painted by Native Americans on buffalo hides. 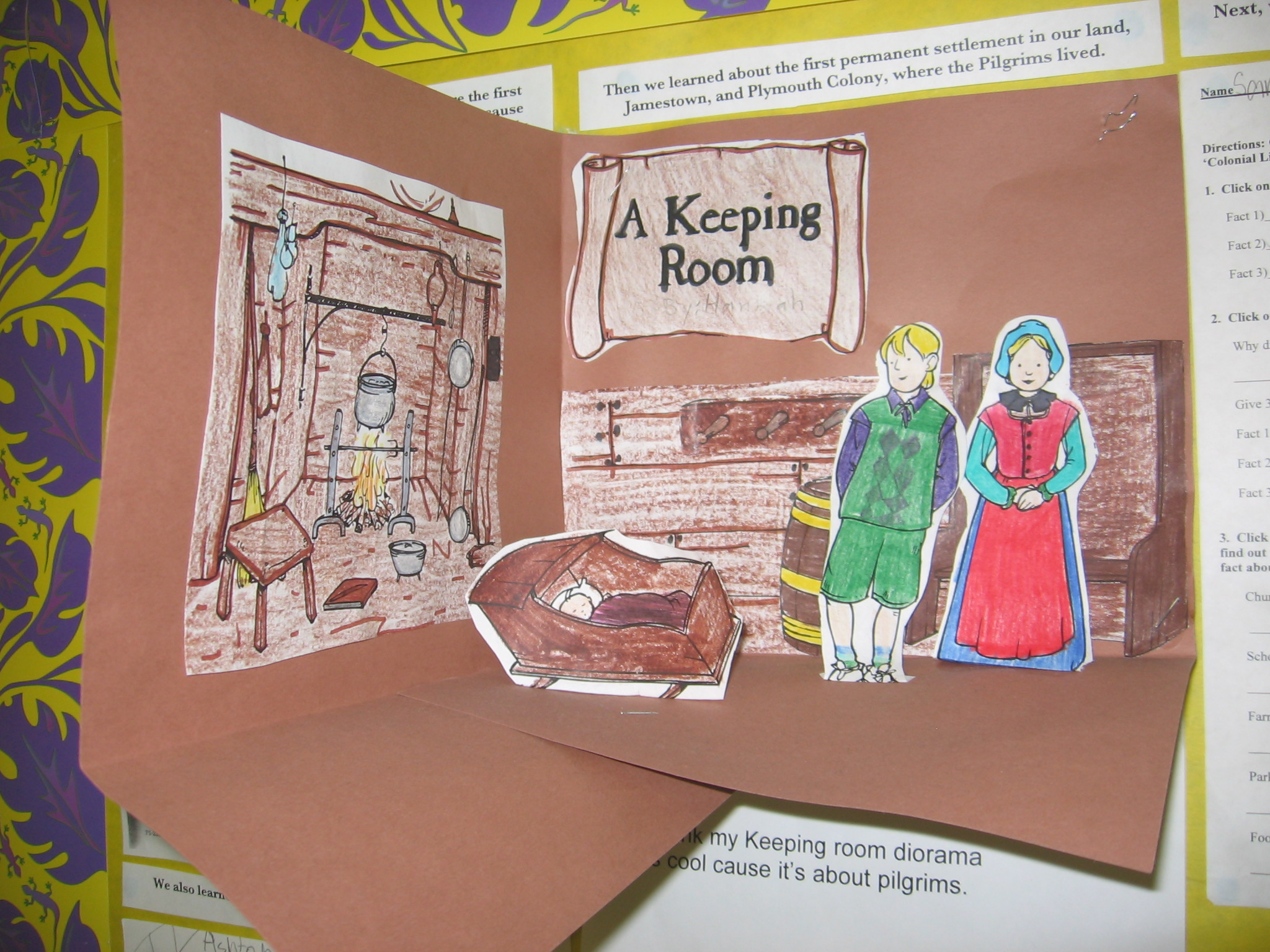 We learned about the first permanent European settlement using activities from the teaching resource book History Pockets: Life In Plymouth Colony.  (This is a fabulous series of books which I highly recommend.) I put the information from the book on an overhead to discuss with the class, then they created ‘Keeping Room’ dioramas.  Afterwards, students used their laptops to type up a description of the dioramas. 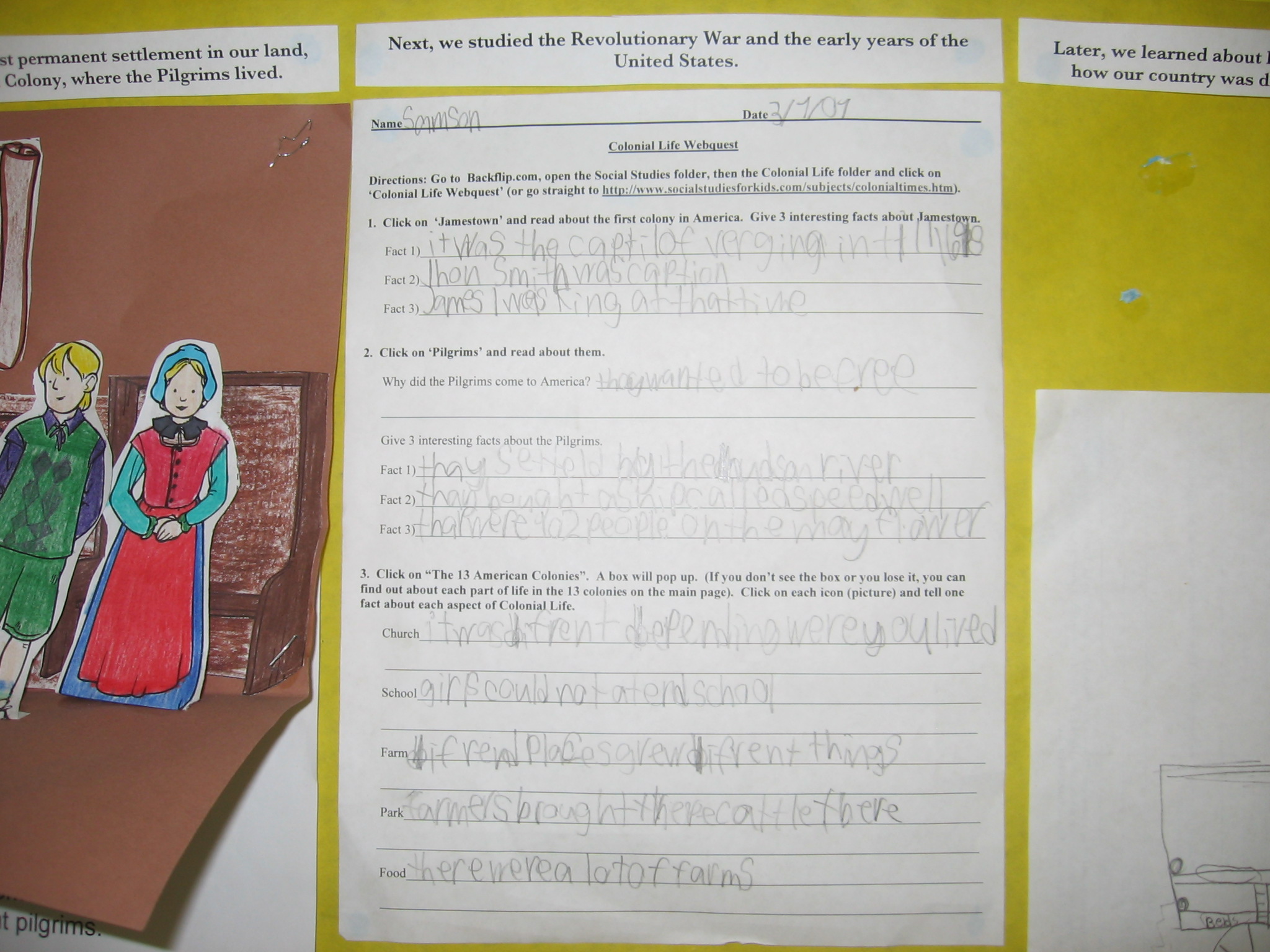 This is a colonial life web quest I created.  All information is found on one website, so the kids were able to navigate and find the information they needed easily and quickly. 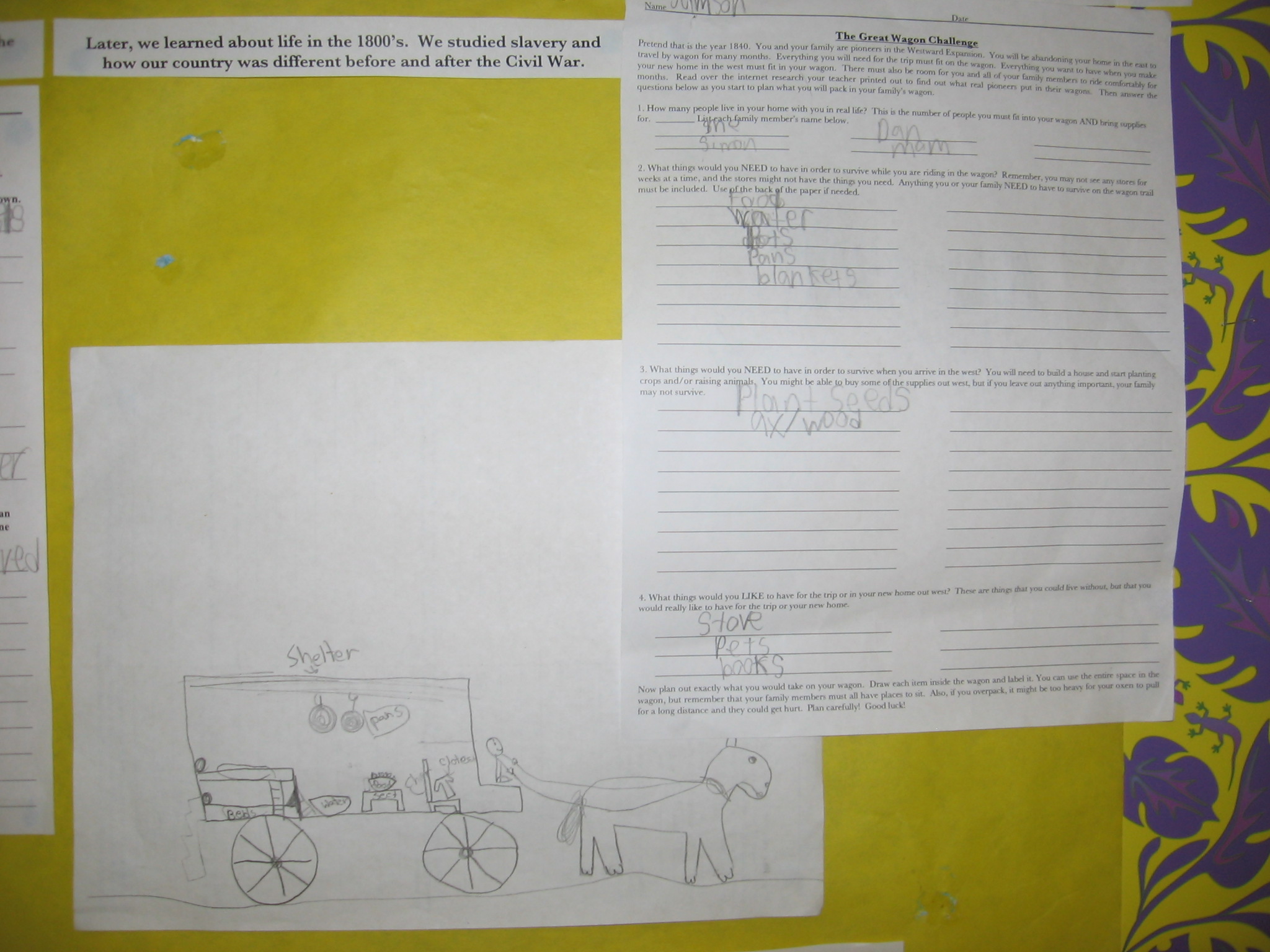 I created a simple Power Point with photos of real wagons, and printed out information from the internet to show the students what the pioneers actually packed in their wagons. Then I had the kids complete ‘The Great Wagon Challenge’, in which they had to decide what they would have put on their wagons if they were pioneers.  This activity was developmentally difficult, and many of the students’ answers weren’t logical by a mature standpoint.  However, the kids were learning to think critically about life in the distant past, and the quality of their discussions was top-notch. 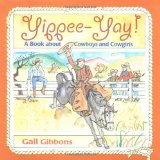 There’s a book by Gail Gibbons called “Yippee Yay!” that has great examples of text features, especially diagrams.  It’s included in our reading anthology (Harcourt-Trophies), so I had the kids make their own diagrams to show the equipment that cowboys and cowgirls used in the Old West.  This was part of the Westward Expansion portion of the unit. 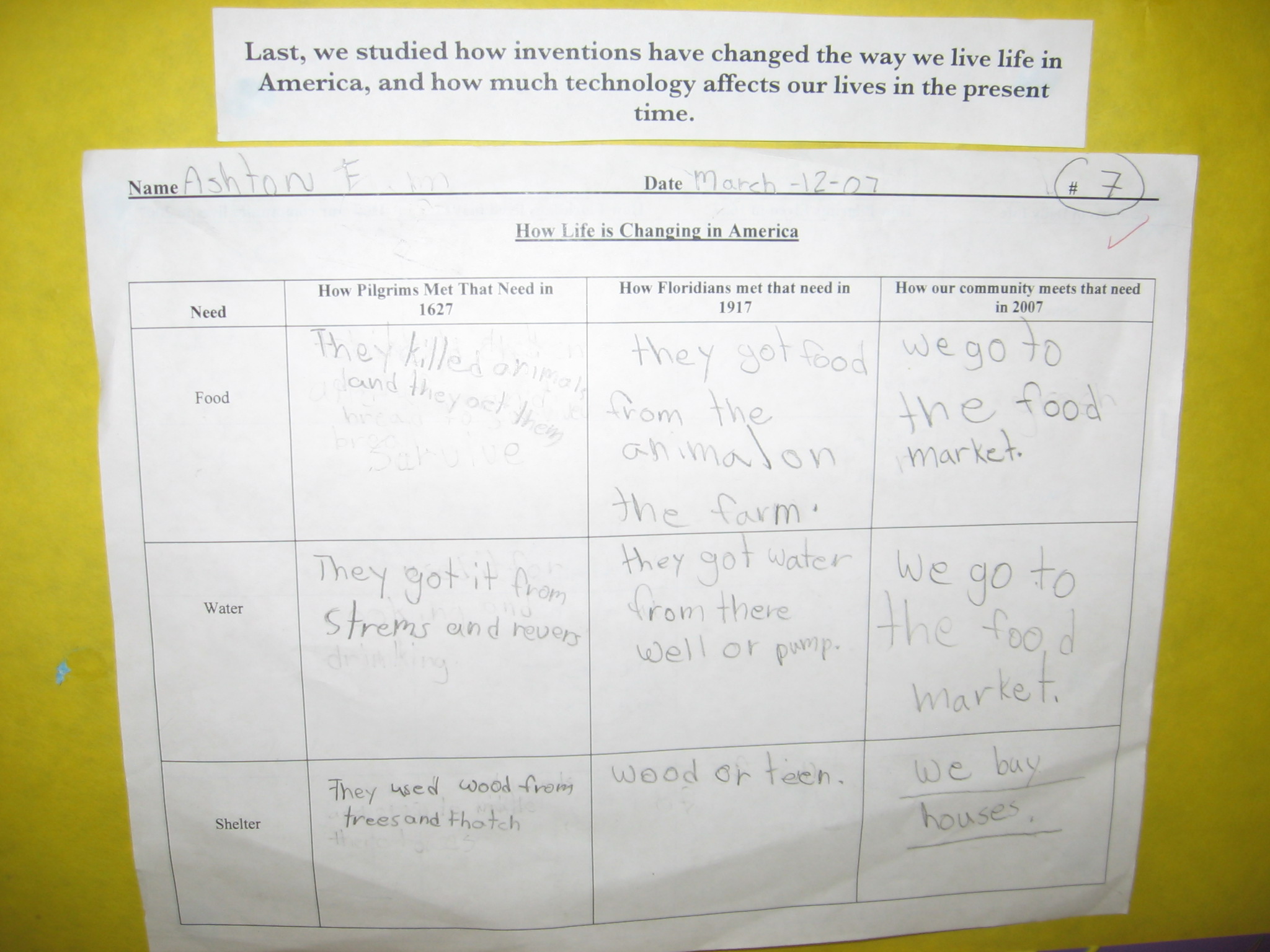 Earlier in the unit, we brainstormed human’s basic needs, and the kids filled out the first section of the chart explaining how the Pilgrims met those needs in the 1600’s.  After taking a field trip to the Old Davie Schoolhouse, they did the same for Floridians in 1917.  (Here’s the reflection form we used after the field trip). At the end of the unit, they wrote about how our community meets those needs today.  You can download the chart here and change it to fit your US history unit.  Again, this was challenging and most students weren’t able to come up with the ‘correct’ answers, but I could see the progression in their thinking and the way their understanding of the past had deepened since the beginning of the unit.  That’s powerful stuff!

During our guided reading group time, I had students pair up and explore some of the books from the “If You Lived When…” series. These are pretty much the best books EVER for teaching kids about history, and are perfect for grade 3. I own copies of almost every book in the series. The kids picked one that interested them and used it to answer basic questions in a report on the particular time period (civil war, Revolutionary war, slavery era, etc.).  Since the books have a table of contents in the beginning which is organized around questions (What would you have worn? Would you have gone to school? What would you have eaten?), it was a a great way to have kids practice using nonfiction texts to research. 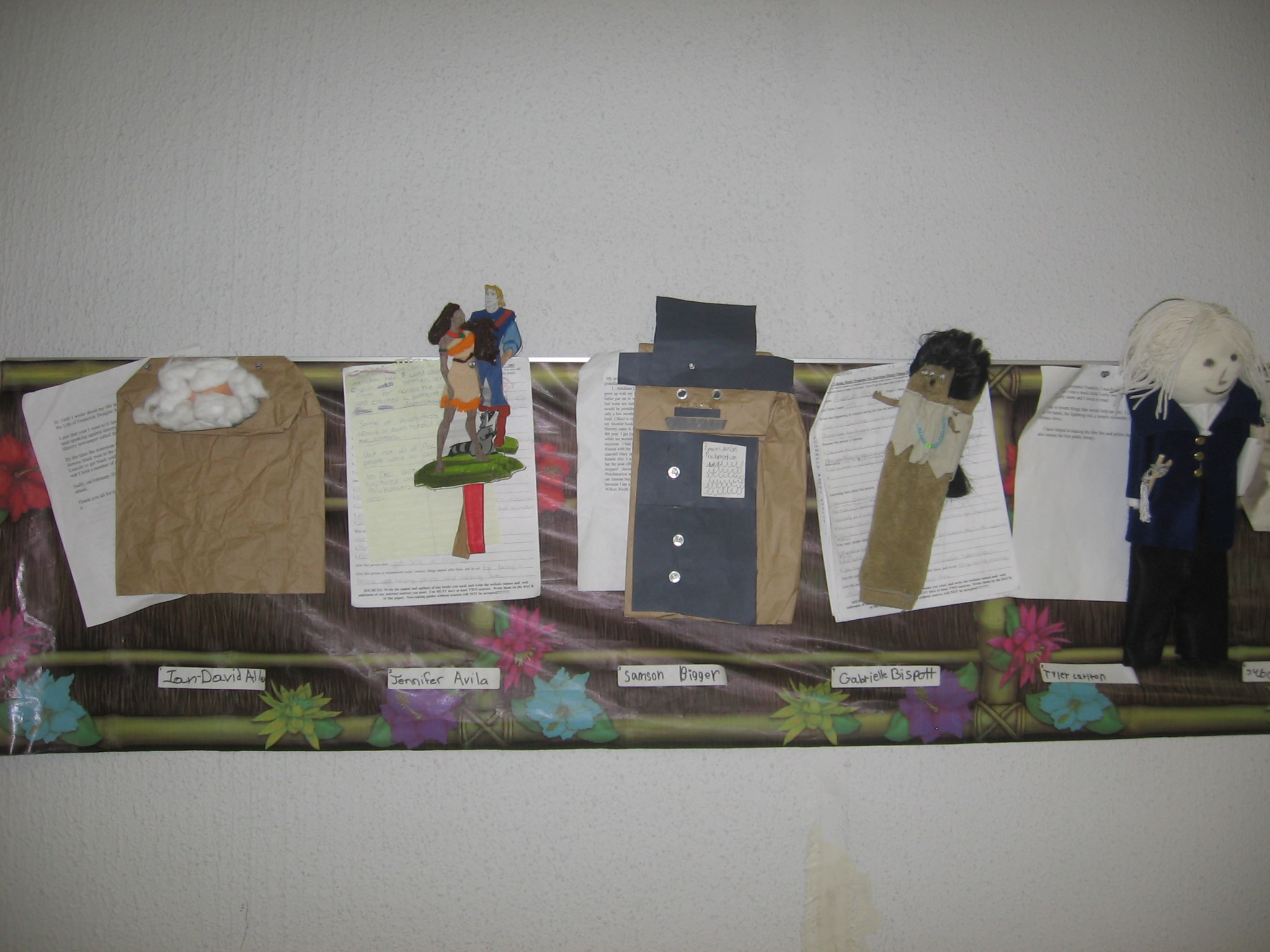 At the end of the unit, students had a Home Learning Project in which they researched a figure from American History and created a 3 minute oral report and a puppet resembling the character.  The report had to be written in first person so that the child pretended to be the person she had researched.  The presentations were made from behind a puppet stage and the kids made their puppet’s mouths move as they talked.  The presentations were hilarious and informative at the same time!

I absolutely love the History Pockets series! Below are two great books from it, and two other resources that are really useful.

Germantown Academy has a really cool webpage explaining their Colonial Days Marketplace in which students research and re-enact colonial life. They also have a Colonial Days Schoolhousewith an awesome video the kids created themselves.