Home Articles Why I don’t Twitter (except when I do) 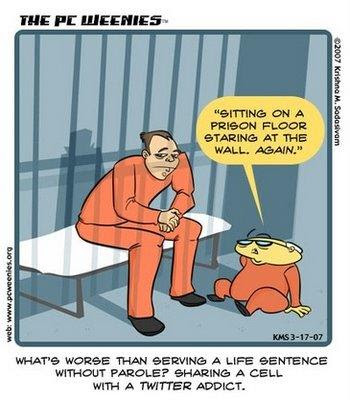 I love technology, but I’m not an early adapter. I prefer to wait for the kinks to get worked out and see what’s (really) useful for other people. Twitter’s been around for awhile, but isn’t ubiquitous yet, so I’m apprehensive.

I wrote a post in October called “Why I Don’t Twitter”, but I didn’t publish because I was still trying to draw some definite conclusions. Here’s what I wrote:

Tonight, I felt the urge to Tweet for the first time. My fiancee, who is a professional musician in Williamsburg (that’s Brooklyn, not Colonial, as SITC fans will appreciate) was playing at a gig in the Bowery in Manhattan. My tweet thought: Went to a gathering tonight which I initially assumed was a costume party, until I realized everyone was just that tragically hip. I can haz top hat with circa-1940 beaded lace?

There. Now that you know, is your life any better? Or for that matter, worse? My fake twittering was utterly inconsequential.

Decrying the micro-blog as pointless is dangerous territory. After all, not every blog entry I post is consequential enough for me to be all high and mighty (although in fairness, that Rihanna post was my deliberate backlash against Twitter. Why go hi-tech when you can scrawl something on a post-it note?).

But regardless of depth and quality, the blog posts are there. Still. They’re part of a package of entertainment, a collection of thoughts that I’ve carefully put together as a representation of the person I want to share with the world. Why not take the time to craft my ideas into a thoughtful blog entry, to be indexed by Google and accessible for all conceivable time? If it’s worth sending into the internetz, isn’t it worth preserving? And if it’s not, why share?

I don’t want to fall prey to the 21st century western presumption that every thought that comes into my mind is worth sharing with the world.

In high school, I had a pager. If someone wanted to tell me something, they had better figure out how to do it in ten digits or less (the most expressive number we had was 70793739, which spelled I love you upside down). I’d go to the mall with a friend, and tell HER everything I was thinking, because she was with me. If I needed to share with someone else, I waited till I got home and called them. It turned out most of my thoughts weren’t that important, because I forgot about them between the Gap and my waterbed. Life was good.

Neither do I need to burden myself with the thoughts, problems, and opinions of everyone else who has access to the internet. There’s something to be said for a low-information diet. So you found a great website and you twitter it. Will the quality of my life be measurably enhanced by that link? 99% of the time, no.

I’m a teacher and a writer. Of course I value the exchange of knowledge, and I always put myself out there in search of that 1% of life-changing information. But I have to set limits for myself, and right now, micro-blogging is where I draw the line.

That was my perspective in November. Since that time, several people have inadvertently won me over to Twitter’s side. The first was JMoney, who displays tweets on her blog. I thought to myself, now there’s a woman who knows how to effectively tweet short, witty, random thoughts: there must be more like her, and I don’t want to miss out on the pithiness. I signed up reluctantly and posted my first Tweet: I can’t believe I joined Twitter. This is going to create a ridiculous distraction from doing anything productive. Crap.

That was all I micro-blogged for two months. I finally bought fully into the concept this weekend after reading a bunch of articles on how Twitter can drive blog and website traffic. I also paid close attention to how Matthew K. Tabor (Education for the Aughts) and Angela Maiers effectively use Twitter to share educational resources and insights, and their techniques interested me.

Even after Googling the questions I have about Twitter, I’m still not entirely clear on how this process if supposed to work. For example, if I have hundreds of followers (and that’s not atypical for many who tweet), how will I be able to keep up with any one person? Doesn’t the flow become disjointed? And if I don’t log on for a weekend, I’ll have thousands of messages–am I supposed to go back and read them like old emails, or just write them off like TV shows I miss? And most importantly, won’t my tweets be irrelevant to a lot of people? After all, EduNews bloggers and my mom don’t exactly have the same interests.

I don’t really know what I’m doing, or how this will play out…but I’m willing to try. Twitter could be a fun way to connect with other bloggers/educators, share great resources, network, and show a more personal (read: random and silly) side of myself that doesn’t fit well into this blog or the devotions site.

I’d appreciate any tips you all have for helping me use this thing productively. And I’d love to find people to follow. So far I’ve met a lot of interesting Twitterers, and found some familiar faces as well (The Jose Vilson, Mamacita, Joanne Lee Jacobs, The Reading Zone).

Which of the 5 steps of Twitter acceptance are you on? If you’re loving it, be sure to leave your Twitter name so I can follow you. Mine’s AngelaPowell.