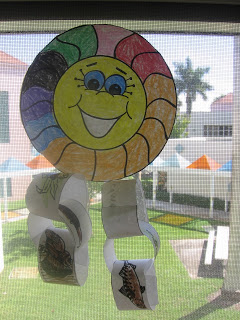 The kids are finishing a food chain project in science when calamity strikes. They had to cut out strips of paper with pictures of plants and animals on them and then form the strips into interlocking chains to demonstrate predator/prey relationships. It takes a good forty-five minutes and a lot of scotch tape, but is worth the time and resource expenditure because the kids can literally see the inter-relatedness of organisms in a variety of habitats and how all energy originates from the sun. Four minutes are left on the timer. Suddenly I hear:

I look up, alarmed. I don’t hear a knee-jerk ooooh echo through the crowd or see eight million arms waving wildly for my attention, so I assume I misheard. Twenty seconds later, “Marcus” raises his hand.

Argh. So I DID hear it. The tattling delay was due to students actually following the procedure I taught them for resolving interpersonal disputes and talking to each other about inappropriate behavior. The other students’ intervention has apparently been unsuccessful, and now they’re following the chain of command.

I saunter over and survey the situation. “What happened, Jerry?”

He is in near hysterics. “I lost my rat! Now I don’t have anything to eat the corn and the owl’s gonna have to eat it! That DOESN’T make SENSE!!“

“Okay, I see you’re frustrated about that. What did you say when you discovered you’d lost your rat?”

Blinks matter-of-factly. “I said, ‘I lost my rat, dammit!”. I am clearly supposed to grasp that this is a rodent-related emergency and cussing is justified.

Marcus is pleased with this confession. “Me and Shante TOLD him not to say that! It’s not appropriate for school. And he said, I don’t care! So that’s why I raised my hand.”

I nod solemnly. “Thank you, Marcus. You did the right thing by telling him first, and then letting me know. So Jerry, we’ll find your rat in a second. But first I want to make sure you understand that it’s okay to feel mad, but you have to find an appropriate word to use. What else could you say besides the d-word?”

My semantics game is not amusing Jerry, who is getting teary-eyed and peering frantically under the table. “I don’t knooooooowwww!”

“Well, let’s see. Marcus, maybe you can help him. What do you say when you get really frustrated?”

Good guess, wrong scenario. “I mean, when you’re not mad at someone else, you’re just frustrated by yourself. What do you say instead of saying the d-word?”

Marcus scrunches up his face. “Well… I just say it in my HEAD!”

Thank you, Marcus. I’ll take it from here.