This weekend was packed full of hugely important events in our nation’s history, and students are going to show up Monday morning with a wide range of emotions, questions, and thoughts that need to be expressed. That’s why I’m collaborating with hundreds of other TeachersPayTeachers sellers to offer FREE curriculum resources which help you support kids in the ways that are needed most right now.

#WeHoldTheseTruths and #KindnessNation are the hashtags we’re using on social media as well as on TpT to help you find the resources you need. We’re tackling issues like: 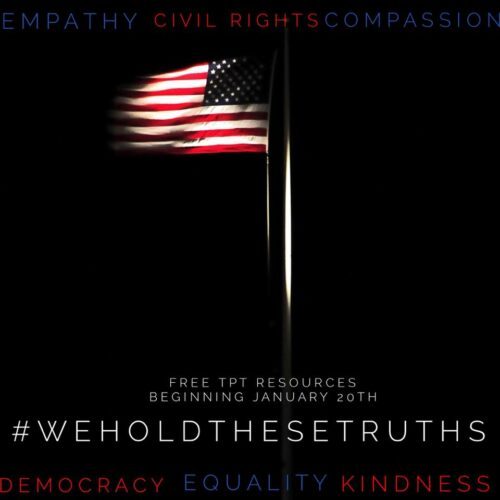 The free resource I’ve created is based on Dr. King’s “Letter from a Birmingham Jail.” It’s a 32-slide PowerPoint that you can use to teach the lesson and guide students to understand Dr. King’s thoughts about what it means to be an ally in the fight for social justice. Students will also reflect on the difference between negative peace (an absence of tension/conflict) and positive peace (the presence of actual justice.)

The PowerPoint is completely editable so you can change the wording to fit your students’ needs. There is also a one page printable activity you can have students complete afterward, in which they define negative and positive peace and examine examples from either their own lives or from the news. Students then identify ways they can choose to work toward positive peace.

Here’s the text from the slideshow lesson, which I think is worth reading and considering even as an adult:

Dr. Martin Luther King, Jr., is often noted for his “I Have a Dream” speech. But there’s so much more that we can learn from his legacy, and so much more that he accomplished beyond that one powerful speech. Dreaming of a better, more equal world is a good thing. But taking action toward making that world a reality? It’s crucial.

We don’t seem to hear quite as much about Dr. King’s Letter from a Birmingham Jail. You see, a court in Birmingham, Alabama, ordered that Dr. King was not allowed to hold a demonstration or protest, and he was jailed 11 days for exercising his right to free speech. While in jail, he wrote a very long letter that included this text:

I have almost reached the regrettable conclusion that the Negro’s great stumbling block in the stride toward freedom is not the White Citizens Councillor or the Ku Klux Klanner but the white moderate who is more devoted to order than to justice; who prefers a negative peace which is the absence of tension to a positive peace which is the presence of justice; who constantly says, “I agree with you in the goal you seek, but I can’t agree with your methods of direct action” …Shallow understanding from people of good will is more frustrating than absolute misunderstanding from people of ill will. Lukewarm acceptance is much more bewildering than outright rejection.

What does this mean?  Let’s start by looking at the concept of negative peace versus positive peace.

Negative peace is about the absence of tension and conflict. It’s about people turning the other way when they see injustice, and pretending discrimination doesn’t exist. It’s saying, “Let’s just get along and come together as a country” without addressing any of the issues that prevent us from coming together. Negative peace is sweeping the problems under the rug.

The main goal of negative peace is not having to deal with uncomfortable issues and getting on with regular life. Negative peace is more concerned with order than justice.

Positive peace is about the presence of actual justice, and working to right wrongs. Obtaining positive peace means doing hard work and having difficult conversations. Efforts toward positive peace will include demonstrating, protesting, marching, and writing to Congressional representatives.

Those who work for positive peace speak up when they see something unfair happening, even if it means a conflict between them and other people, because to stay silent would result only in negative peace (an absence of conflict.)

Dr King talked about negative peace and positive peace because he was frustrated with the people often referred to in current times as “allies.” An ally in this case is a white person who is not necessarily being oppressed him or herself, but still believes that black people (and other marginalized groups of people) should have equal rights.

We sometimes see the same thing happen today when black people engage in peaceful and even silent protests. Dr King was frustrated with white people who said they were on the same side as black people, but weren’t speaking up when they heard their friends make racist comments. These “allies” would say kind things about black people themselves and even have black friends, but didn’t do anything to make sure their black friends had equal rights. They did not take action or do any work to help ensure ALL Americans are treated fairly under the law.

And that’s because they did not really want positive peace (the presence of justice.) They wanted negative peace (the absence of tension or conflict.) In order for black people to be treated equally, there would have to be a lot of civil unrest, a lot of uncomfortable conversations, and a lot of protests, boycotts, and marches.

And many people then—just like many people today—would rather everyone just be quiet and go about their daily lives as if nothing were wrong. They want to avoid conflict even if it means many groups of Americans are not being treated fairly, because it’s easier and more convenient for them.

Dr King’s letter said he felt in many ways that “absolute misunderstanding from people of ill will” was less frustrating than “shallow understanding from people of good will.”  Meaning, it’s in some ways easier to deal with someone who completely misunderstands your position and does not want to see you have equal rights, than to deal with someone who SAYS they want you to have equal rights, but doesn’t really understand what that means or what it’s going to take to get there.

Have you ever had an issue or challenge you felt very strongly about overcoming, only to discover your friends and family didn’t really care that much? They said they supported you, but didn’t really want to talk about it, and didn’t do anything to lend a hand. You were hoping they’d be right by your side as you took action, but they sat on the sidelines instead and half-heartedly watched. You encountered a setback and instead of encouraging you to keep going, they said, “Maybe this isn’t really worth doing. Maybe you should wait and try again later. This just seems too difficult and maybe it’s better to hold off.”

This is sort of how Dr King was feeling that day in the Birmingham jail. So many people supported him in theory but not in actions. They didn’t REALLY get the struggle, or understand why the cause was so important. And, most of all, they didn’t want to disturb THEIR lives in order to help make other people’s lives better.

Will we settle, or will we keep striving? Will we do our part? That’s a decision we can each make, every single day. We can speak up in the face of injustice. We can work toward positive peace. 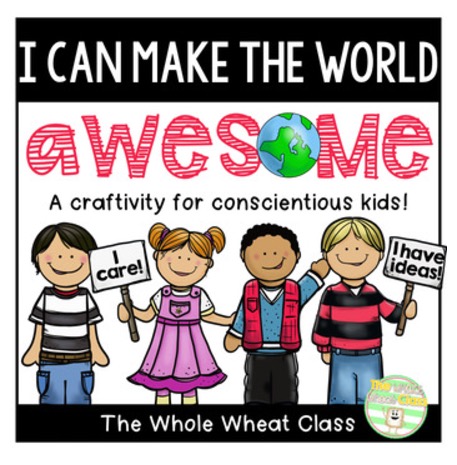 If you teach K-3 and my resource is a littttttle bit heavy for your students, check out this awesome freebie on activism for younger kids. Students learn what a “cause” is and explore ways they can stand up for what they believe. 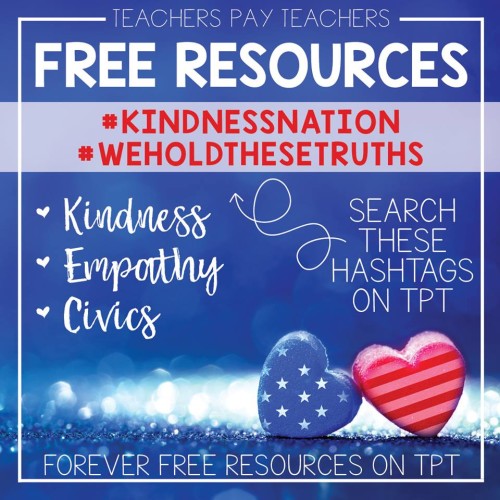 I hope you’ll also check out the dozens of other free #WeHoldTheseTruths resources on TeachersPayTeachers. Here are a few I particularly like:

You can find dozens more forever-free printables on these topics by browsing on TpT using the hashtag #weholdthesetruths (or #kindnessnation for resources centered more specifically on just kindness.) Please know that the materials appearing with the hashtag have not and cannot be vetted in any way, but I have personally checked out each of the ones above.

You might also want to download these free K-12 posters and activities for resisting racism and bigotry and middle/high school resources for talking about policing and violence with youth. They’re very well done so I wanted to mention them even though they aren’t related to what we’re doing on TpT.

It’s my hope–and the hope of every teacher-author participating–that these resources make it easier for you to support your students and help them become kind, compassionate, responsible citizens.

Teachers, you are on the front lines as defenders of truth. Our students need you more than ever.

How to hold onto hope when school morale is faltering

Preventing bullying in the classroom with Dr. Marcie Beigel