Seriously. I’ve been blogging now for an entire decade. How did that even happen?

I’m glad you asked, because I want to tell you. Picture it: July 22, 2003. Not in Sicily but in the suburbs of Washington, D.C. I was sitting in my living room, doing what I always did in the evening: reading and posting on the Teachers.net message boards. The boards were a place for teachers to ask questions and share ideas, and I’d come there as a new teacher to figure out what the heck I was supposed to be doing.

There was a lot of stuff I didn’t know as a fairly new teacher, but I always had something to contribute when the discussion turned to procedures, routines, organization, and behavior management. The other teachers’ positive feedback was so rewarding, and it felt great to help fellow teachers by sharing what worked in my own classroom. I found that teachers were asking the same type of things over and over, and I was often repeating my responses. So on July 22, I decided to save myself some time and paste those responses into a few web pages, then just share the links with the teachers when they asked a related question.

And there it was. Ms Powell’s Management Ideas for Teachers was born. 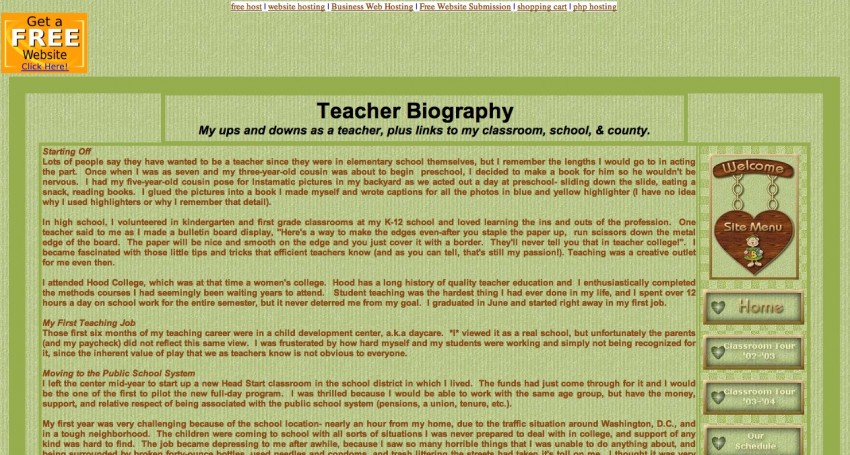 The site looked like this in fall of 2003 at its original domain, mspowell.freehost.com. I used a free web server and template which I think looked pretty decent for the time but makes me cringe now. Updating the pages was a nightmare and took for.ev.er. I had to teach myself HTML coding in order to format the pages. It was a skill I’m really glad I learned though, because I still use it daily.

I was one of very few teacher bloggers, period, but was also part of an even smaller minority of teachers who were taking pictures of their classrooms and uploading them to the internet. That was only possible because my school had a digital camera I borrowed: in my personal life, I was still using disposable cameras, so the digital picture thing was really, really, cool. 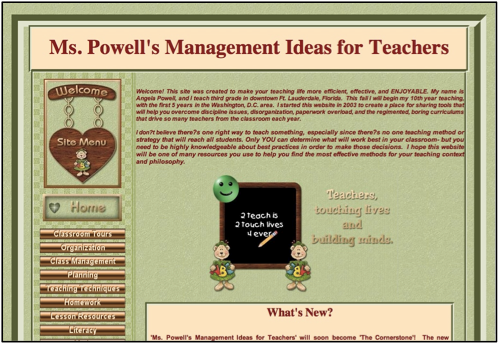 By 2006, I’d added dozens and dozens of pages, and pretty much everything I knew about teaching was now online. I moved the site to its own domain (mspowell.com). I’d found a free dynamic button creator to make the sidebar menu so I no longer had to manually update each and every page’s menu bar whenever new pages were added, a process which took hours. I thought it was pretty fancy since the subpages appeared on mouseover.

All the web pages were static: there was no system for commenting or sharing, but I started a message board forum so teachers could share ideas that way. (Those message boards still exist, by the way, but subscribers use it mostly as a newsletter system to find out what’s new on the site twice a month, and they post questions in the blog comments or on social media now.) 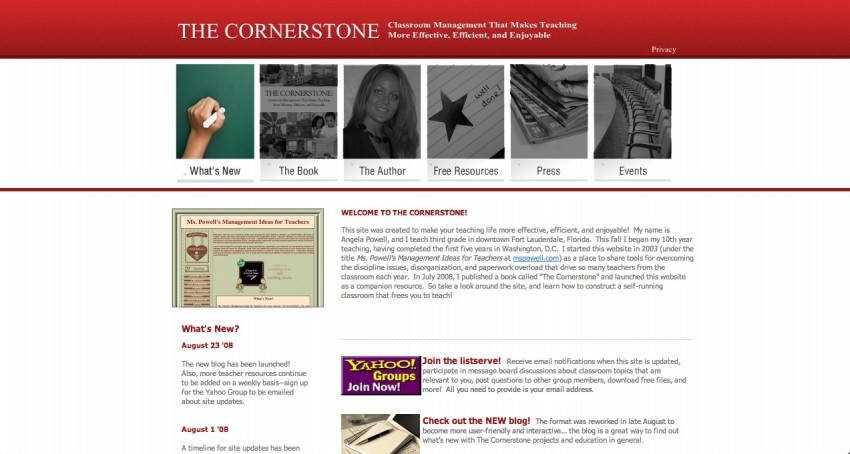 After I published The Cornerstone book in 2008, I moved from mspowell.com to TheCornerstoneForTeachers.com. I got engaged that same year and wanted use the URL AngelaWatson.com, but that was (and is) still taken by that actress who used to be on the sitcom Step By Step. (I always check her site out periodically–she’s had a “this website is under construction” notice up for at least five years, which kinda annoys me, because if you’re going to have the domain I want, you could at least be using it. However, I am extremely grateful that she has not opted to put adult pictures on the page or something else that might cause elderly teachers to have a heart attack after Googling me and clicking the first link.)

Anyway, I bought a fancy flash template for $79 and totally revamped the site. When you moused over each picture at the top, it would burst into full color. The site looked more professional but was still hard to update and would constantly do wonky things that I wasted hours trying to fix. After a year or so, I realized the flash template would be unusable on mobile devices which were apparently about to take over the world. I couldn’t imagine that very many people would want to read my website on those tiny Blackberry screens, but whatev. I heeded the advice and abandoned the flash ship.

I don’t think the site had any sharing buttons, which didn’t seem like a big deal at the time, but it also still didn’t have a way for people to comment, and that was a big deal. I started a separate Cornerstone blog on Blogspot since blogs had become a “thing” at that point, and  the whole commenting feature and subscriber feed was awesome. I was no longer “talking” to myself and could actually get feedback from people who were reading–it was amazing! The only problem: I was having to update the blog and the website, and most people only knew about one or the other. It was time to merge them. 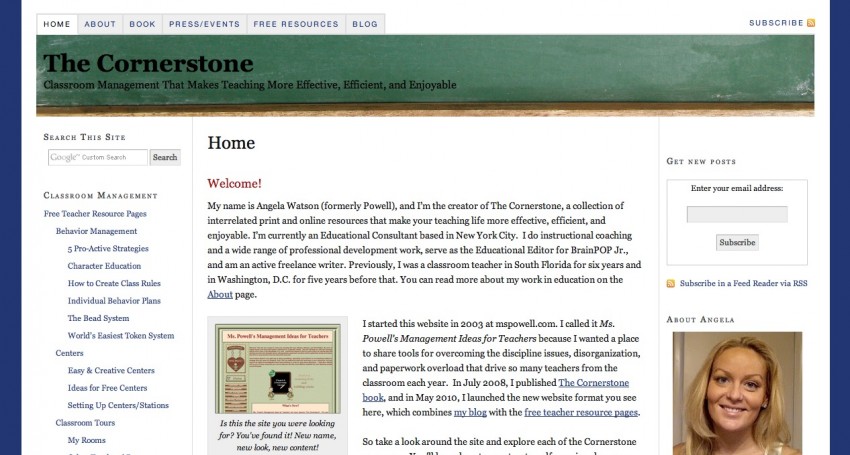 In 2010, I switched to self-hosted WordPress and have never looked back. I use the Thesis theme and love it. I can add and edit content easily, and visitors can comment and share the resources in one click. I imported the old blog content to the site and everything was in one place.

It was good timing, because I had also recently quit my teaching job and moved to New York to be with my husband, whom I married in June. I had also just started my own publishing company and republished my book, and begun doing instructional coaching and educational consulting full time. (If you have actually read this far into the post and are still enjoying my rambling, check out this post about my experiences navigating the NYC subway system alone for the first time in order to go on job interviews. I think you’ll like that, too.) So, yeah, a lot of really great changes professionally, and a lot of really great changes on the website. 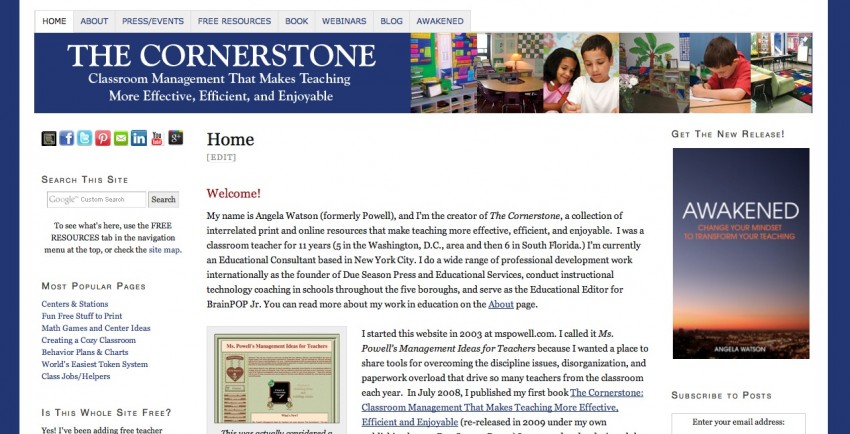 Since then, there have been only minor tweaks to both the site and my work. In 2012, I added a professionally-created header, prominently featured social media options, and my two book babies in the sidebar! The current website looks pretty much the same, though I’ve cleaned up the sidebars and the home page quite a bit, and added more to the navigation menu. I can sense that the site is starting to look a little dated and I need to make some changes, but with so much else going on, I’d rather focus my energy on creating great content than a great-looking website. I’ll get to it eventually!

I’ve now published three books with a fourth in the works, and created a webinar series and a ton of printables. I still do instructional coaching and consulting when I can fit it in, but mostly, I’m still doing what I was doing at this time ten years ago: sitting at my computer screen, typing away, sharing my heart and my ideas with teachers. It’s what I love to do most, and I can’t imagine doing anything else.

So that’s (most of) my story. On Monday, the actual 10 year anniversary, I’m going to have a massive giveaway, so stay tuned for that. I don’t do a lot of blogiversary type stuff or yay-let’s-celebrate-follower-counts type of things, but I’m going to go ahead and milk this whole 10 year thing a bit more and share some of my favorite posts and resources from the past decade, too. You can hang in there for a little more me-monster time, right? After all, we’ve made it this far.

I would LOVE to hear from you all and find out how long have you been reading the site. Has anyone reading this post been following since the very beginning? When did you join the community here? What has changed for you over the past decade? Thank you, as always, for sharing and being a part of my little corner of the internet. This site has been a labor of love, and it touches me so much to know that others love it, as well.