Beating students legally and other news

Beating students legally and other news 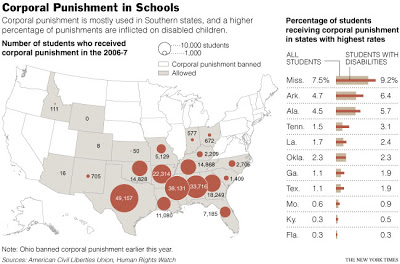 The use of corporal punishment is (still) legal in 20 states, and children with disabilities get a disproportionate share of the whippings. [The New York Times]

J.K. Rowling’s series paints an unrealistically blissful outcome for a child with a traumatic childhood, which may somehow underscore the need for educators to pay more attention to depression symptoms in young children. [The Early Ed Watch Blog]

Lingerie is a back-to-school staple:

At least according to the state of Virginia’s school supply tax holiday laws, which are geared toward helping merchants more than cash-strapped parents. [TLN’s A Place at the Table]

A&E ‘celebrates the public school teacher’ by paying Tony Danza to act like one:

Rather than filming a reality show about real teachers, a 10th grade English classroom will be taken over by the former “Who’s the Boss?” star. [Yahoo TV, hat tip to A Truth Universally Acknowledged]

Some districts are spending limited professional development resources to train teachers in basic internet skills. Assuming that taking a “Which Golden Girl Are You?” quiz is actually a skill. [The Tempered Radical]