There’s at least one in every classroom — yep, I’m talking about the kid who just sits there, and doesn’t work. The one who needs constant cajoling to put pencil to paper and get started. In some cases, there’s an attitude problem and the student is disengaged from school in general, and in other cases, the student just lacks focus or self-discipline.

Though it’s a common problem that happens in pretty much every classroom in America, there isn’t any clear-cut solution, because the root cause is different for each student.

Obviously, you want to make the work as meaningful, authentic, and relevant as you can, and build rapport with students. But there are some kids who just aren’t going to focus and get their work done no matter how much of a personal connection you’ve tried to make with them, or how much choice you’ve given in the assignment, or how potentially fun it could be. 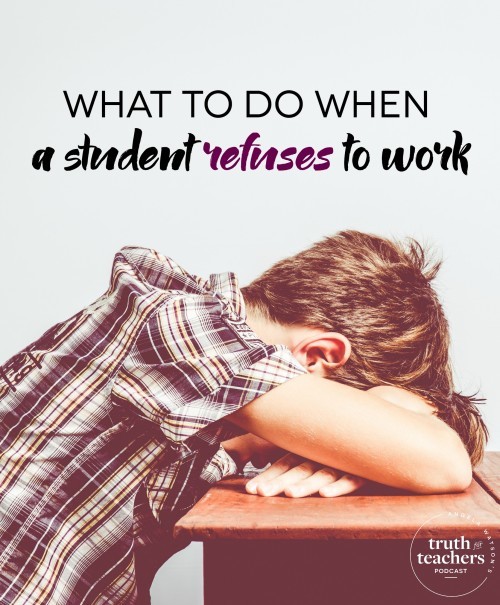 Want to listen to this post instead of read?

Building rapport with kids and giving them meaningful tasks is crucial, but it’s not a magical fix in every situation

A few years ago, I did some instructional technology coaching at a middle school in the Bronx with this fantastic, wildly energetic math teacher. He and I worked together to create an end-of-unit project for students that ticked all the 21st century learning boxes: We had developed it with student input, gave kids lots of choice in terms of topic and the tech tools they were able to use, documented everything step by step so every student was prepared to be successful and had accountability and purpose … it was simply a model project, probably the best one I’ve ever had a role in creating.

And still about a fifth of the class just did not want to do the work. They switched over to watching YouTube videos every chance they got, or messed with the computer settings so the screen would flip upside down, or renamed all the files something inappropriate the second we turned our backs.

There was nothing we could do to make calculating percentages as interesting to the kids as Googling photos of Nicki Minaj. We had made the assignment as engaging and meaningful as it could ever possibly be, and there were some kids who still just. didn’t. care.

So I want to say right up front that a student’s refusal to work is not always the result of a poorly planned or disengaging lesson, or the failure of the teacher to establish rapport. I know this directly contradicts what a lot of experts believe, but I don’t think student disengagement is a problem that can be 100% solved for every student if the teacher just works hard enough.

A great teacher can minimize the number of kids this happens with, and that’s the goal we should be striving for, but let’s be real — it requires a Herculean amount of patience, energy, and effort that frankly, not everyone possesses. Teachers are tired. They have a lot on their plates.

And there comes a point where I think you have to accept that you’ve done what you can do to make the classroom culture and lessons as strong as you possibly can, and not blame yourself when a student doesn’t pull his or her own weight. I’ve just seen too many talented, dedicated teachers burn out trying to get a kid to care, and they have no energy left for the kids who do care.

Here’s what I respond when a student refuses to work

I’m going to assume that your first step is always identifying and addressing the root cause of the student’s refusal to work. t student. I’m assuming you’ve built a rapport and relationship with thaI’m also assuming you’ve already modified and/or clarified the assignment and considered the obvious interventions.

There are a million articles that have already been written about those things, so I won’t digress. For the purposes of a 15-minute podcast here, I’m going to sum up my general response to a student who refuses to work in four basic steps:

And then you repeat. Every day.

Never stop returning to step 1 and encouraging without making a big deal, and #2 where you give the kid opportunities to talk. Beyond that keep letting the natural consequences happen.

What about YOUR attitude?

I know you’re under a lot of pressure to get kids to meet the learning standards. I know it’s YOU who’s accountable for THEIR choices and THEIR test scores, and that’s massively frustrating. But if you focus on that, you will burn out, and you won’t be able to properly teach the rest of the class who does want to learn.

I want you to expend less effort on trying to force kids to care, and lecturing them about their futures, and nagging them to take responsibility for their work, because 95% of the time, it’s not effective and only serves to wear you out.

Don’t plan a lesson thinking about the kids who hate everything you do.

Plan it for the five kids who love everything you do, and the 15 lukewarm kids who could be brought on board if they notice enough enthusiasm from you and the others.

Hook in those five kids. Focus on them — that’s what keeps your energy level up and makes you a good presenter. Use their enthusiasm to draw in the majority of the class. Make it irresistible to do the work so the ones who choose not to feel like they’re missing out.

Does this work every time with every disengaged kid? Of course not.

But it will keep the energy and interest level high in the room so that students are more likely to participate, or at least not be disruptive in their lack of participation.

You’ve turned into that kid: You’re checked out, you’ve already decided you’re not going to learn anything and there’s no point in trying. Instead, you’re going to criticize the person who’s trying to help you and think of all the reasons why what she’s saying is irrelevant.

You have more in common with that kid than you think. And as you’ve seen from the results that she or he has gotten, this is a dangerous path to go down. It’s not just the student who’s negatively impacting the whole class’ learning, it’s your unwillingness to enter the room each day with an open mind, that same open mind you want your students to have, ready to soak up wisdom and try things even if they’re hard or you seem unlikely to be successful with them.

You can’t control anyone but yourself. And if you spend your day trying to control another person instead of inspiring them to control themselves, you will get nothing but frustration.

The key to getting kids to work is NOT giving them more serious consequences or bribing them.

Motivation is not powered by electricity. It’s like a fire, and it starts with a tiny spark.

You have to be watching for it with these disengaged kids and protect that spark like their future depends on it.

Breathe life onto that spark. Shelter it from anything that would keep it from growing. Add fuel to the fire. And then fan the flames.

Tend that fire daily so it doesn’t go out.

That’s your job. That’s why you became a teacher.

Not to write referrals and assign detention and hold back recess from kids who hate school or refuse to work.

So, stop looking for the magic punishment or reward, and don’t depend on trying to make your curriculum so authentic and exciting that kids want to buy in. If you can do that, great, but the reality for most of us is that we have to teach things that aren’t particularly exciting and that students aren’t going to be particularly interested in, no matter how we dress it up.

It’s you that needs to be authentic and exciting. An inspired teacher can make calculus or history or grammar or any other topic engaging just by their own energy.

When I think back on the best teachers I had, the subject they taught was irrelevant. I thought spelling was boring, but my high school ELA teacher used to make the craziest sentences up when he gave us spelling tests, and I couldn’t help but look forward to those tests just a little bit. It was him. It was his personality and enthusiasm that inspired me to work.

So stay focused on being inspiring for your students. Don’t focus on whether they are actually inspired.

Remember, you can only control yourself, not anyone else. Do whatever it takes for YOU to be inspiring, and let the energy of your classroom be such that students who don’t buy into the lessons are missing out.

In your room, it’s going to be the norm to have a good attitude and work hard. YOU are the magic solution you’ve been looking for. You have that magic inside you. Now go share it.

When is it okay to say you’ve done “enough” for a student?