That’s according to the 29th annual MetLife Survey of the American Teacher, an always fascinating analysis of teacher and principal perceptions of their work. The fact that teachers are increasingly less satisfied with their jobs is probably not surprising to you, but MetLife found that teachers’ satisfaction levels have dropped 23% since 2008, and that, to me, speaks volumes about our education system.

What has happened to the teaching profession in the last 5 years to cause such a huge decrease in satisfaction? I think it’s reasonable to infer from the survey results that a big part of the problem is budget cuts. They started with the recession and seemingly go deeper every year. Teachers are expected to do less with more, and class sizes have increased dramatically in many schools. More than half of principals (53%) and teachers (56%) report that their school’s budget has decreased in the past 12 months. 86% of teachers and 78% of principals say managing the school budget and resources to meet school needs is challenging or very challenging for school leaders.

The other major change since 2008? The Common Core State Standards. The bar for student achievement has been raised, but budget cuts mean teachers aren’t getting the resources and support they need to implement the standards. 59% of teachers indicated that implementing the Common Core has been challenging or very challenging. (The other 41% must be teaching in states that didn’t adopt CCSS, or are teaching in schools that haven’t fully implemented the standards, because I don’t know a single teacher or school leader who thinks making the switch has been simple. CCSS-aligned assessments are no joke, and we’re only in the beginning stages of implementing them.) 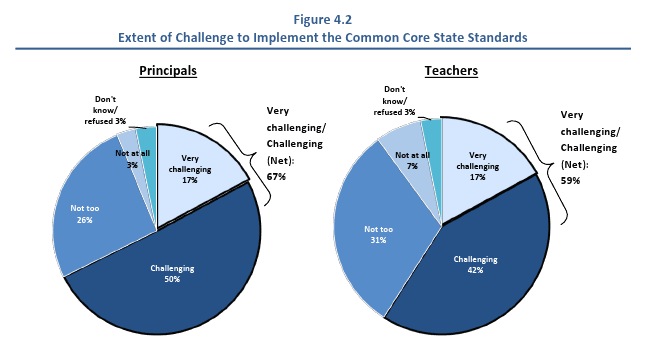 In addition to the difficulties of budget cuts and implementing the Common Core, 83% of principals and 78% of teachers say that addressing the individual needs of diverse learners is challenging or very challenging. 72% of principals and 73% of teachers say the same about engaging parents and the community in improving education for students. (The numbers increase even more in high-needs schools.)

All of these factors (as well as many others that weren’t directly addressed in the survey, I’m sure) are causing teachers to experience far higher stress levels on a regular basis. As I wrote in Awakened: Change Your Mindset to Transform Your Teaching, there are two main factors that help determine how stressful a profession feels to its workers. The first factor is the effort/reward ratio: if the level of effort required to effectively complete the job has a disproportionately low reward (e.g. financial compensation, promotions, and level of respect), the job is often perceived as highly stressful. The second factor is the demand/control ratio: the job is usually considered high stress if it entails excessive, never-ending, high stakes demands but the employee is allowed very little control or influence over the day- to-day operations. Unfortunately for most teachers, the ratios are skewed against them: working in a school tends to be both high effort/low reward and high-demand/low control. 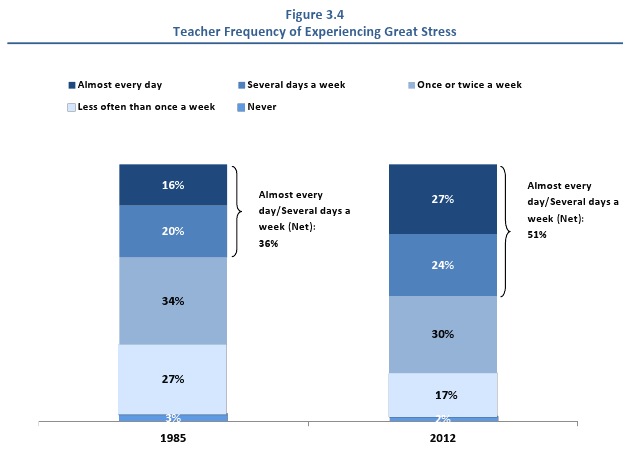 Half (48%) of principals feel under great stress several days a week. But principals’ job satisfaction levels haven’t tanked the same way teachers’ have. A full 59% of school principals say that they are very satisfied with their jobs. Though this isn’t addressed in the survey, I wonder how much of that has to do with the public perception of their jobs. It’s teachers who are constantly vilified by the media and many members of the general public. Principals still seem to command some level of respect in the community, as least in comparison to teachers.

The figure below is particularly fascinating to me. 75% of principals feel their job has become too complex, and 69% say the job responsibilities are not very similar to five years ago. It doesn’t appear that teachers were asked this same question, but I’d argue the numbers would be just as higher or higher for them. The roles of both teachers and principals have changed drastically in recent years as we’ve shifted from nurturing all aspects of students’ development to preparing students for tests and focusing an inordinate amount of energy on gathering and analyzing data. 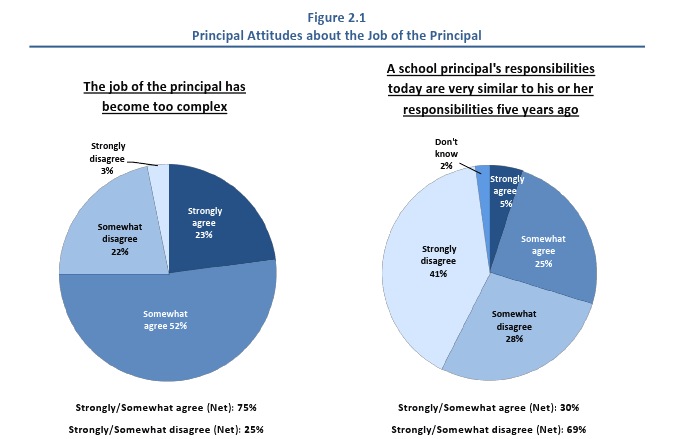 There are a few bright spots in what has otherwise been a pretty depressing survey: most educators think that their co-workers and superiors are doing a good job overall. In fact, 97% of teachers give high ratings to other teachers in their schools, and 98% of principals agree (compared to 95% in 1985.)  The majority of principals (63%) say that their teachers are doing an excellent job and an additional 35% describe the job teachers are doing as pretty good. The percentages are higher at the elementary school level and considerably lower at the middle and high school level (anyone have an idea why that might be?) 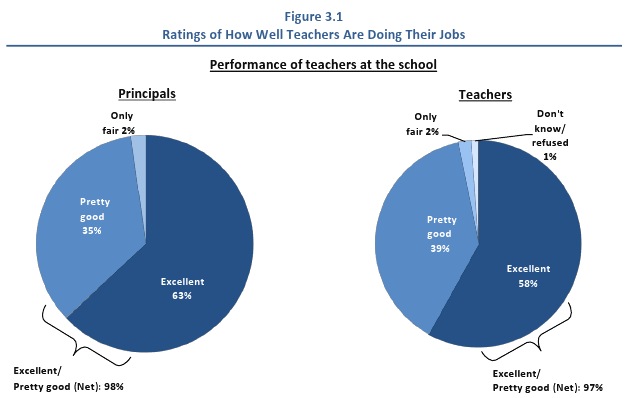 I wonder if a survey of the general public would yield the same results? Additionally, educators believe that principals in their school and district are doing a good job overall. 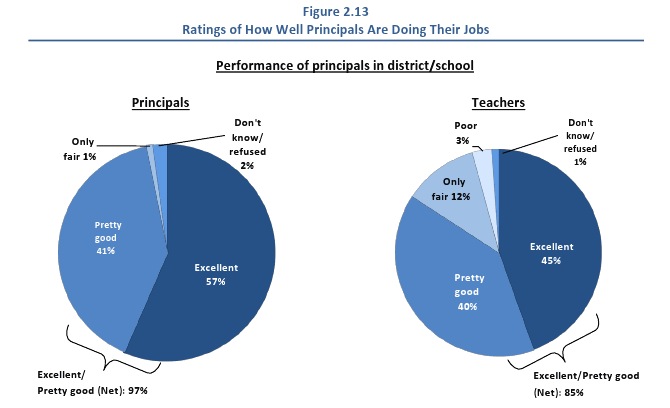 I’d love to know how these statistics fit with your experiences–comment anonymously as needed. I’m particularly interested in finding out the following:

Did any of the teacher job satisfaction survey results surprise you?

Has your satisfaction as a teacher declined in recent years? To which factors do you attribute the decline?