That’s the promise of the Rhymes ‘n’ Times program, which I discovered in the vendor’s exhibition hall at the ASCD conference. The box claims that children will learn ALL the multiplication facts in three weeks (or addition/subtraction/division facts, based on the kit you purchase). The program design is multi-sensory, an approach I deeply believe in and found lacking in my current multiplication instruction. I’d taught my third graders strategies for solving multiplication problems (such as making tally marks and using repeated addition), so they understood the meaning of the operation and could find the right answers most of the time…but the real problem was how painfully long it took the kids to get there. I’d tried contests, flashcards, computer games, a multiplication rap CD…yet the majority of my kids just hadn’t memorized the facts. Rhymes ‘n’ Times has a money-back guarantee, so I asked for a purchase order for the $439.94 kit along with an explanation that I planned to use the kit, review it on my blog, and send it back (which, unfortunately, cost me $15 since there was no return-postage label). 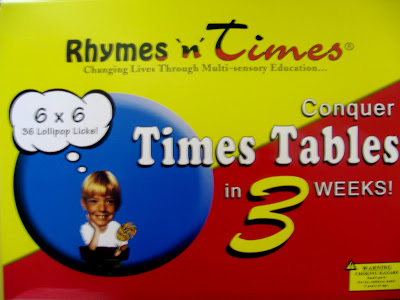 When the box arrived, my co-worker and I eagerly unpacked it. Then we stood there scratching our heads and staring at the materials for a good fifteen minutes before we figured out how the program works. The lesson plan guide was extremely hard to figure out, at least for us, and there was no script to read “word for word”, as indicated on the website. Although there is an instructions page, it’s overly simplified and didn’t make much sense. At the beginning, someone should have written a basic synopsis, such as:

You will typically teach two facts per lesson. [This is not the usual approach, and was difficult to ascertain from looking through the materials.] On other days, you will teach tricks for memorizing specific fact tables. Here is a list of which facts/tables you will teach each day. In every lesson, children will complete a hands-on group activity called a task, do one practice sheet for homework called a homer, and then a review sheet called a scooter the next day before the start of your lesson. On Fridays, a test called a ripper will be administered. The activities will take about twenty minutes of instructional time per day.

Except, the lessons DON’T take twenty minutes per day–some we finished in five minutes, others took forty-five. Time frames are not included in the lessons, which makes planning and managing time very difficult. 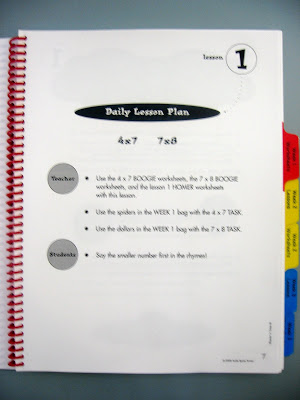 The other major problem is that it takes nearly FOUR REAMS of paper to make the photocopies for 3 week’s worth of activities. Not to mention that the worksheet book is spiral bound, so I had to stand over a copier for an hour just to make a single copy of each page. If they had included the worksheets in loose-leaf form, I could have put them in the feeder and walked away. Argh.

So my enthusiasm was dampened by the time I introduced the program to the class, but I hid my irritation and made a Huge Big Deal about how cool Rhymes ‘n’ Times was. I explained that we would be reviewing a product that claimed to teach them the times tables in three weeks, and that it was their job to decide how well they liked it and how well it worked. Interest levels were high, and when I showed the massive amount of colorful and exciting manipulatives, the kids were hooked.

The program was a lot of fun, and the manipulatives were a great visual/kinesthetic tie-in. The rhymes were catchy, and the tricks for solving the tables were wonderful (I’d never heard of the 11’s or 12’s trick). However, the program’s timetable (no pun intended) was overly ambitious: expecting kids to learn ALL of the 0,1,2,and 5 tables in one lesson and ALL of the 10,11, and 12 in another lesson was completely unreasonable.

And that’s especially true since the program does not include a review of the rhymes already learned: students say a rhyme ten times that first day, and never go back to it again. That might be the biggest drawback of this program: brain research tells us that there must be repeated practice for information to be retained. Although the kids did have many opportunities to practice the FACTS via worksheets, doing so without practicing the RHYMES defeats the point. After a day or two, the kids simply didn’t remember 7×7 bugs in a line/creeping and crawling–all 49 and went back to their ridiculous tally marking. There should be a time at the beginning of each lesson in which all rhymes and tricks are reviewed (maybe in a song) along with some activities that reinforce rhyme memorization (such as fill-in-the-blank worksheets and call-and-response games). 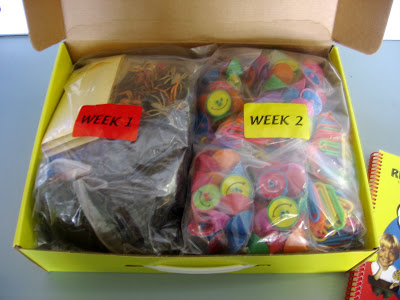 Did the kids enjoy it? Yes. Did it help them? Yes. The class average on the pre-test went from 86% correct to 95% correct. But whether you consider the Rhymes ‘n’ Times program to be effective will be based largely on your definition of effectiveness. The pre- and post- tests are not timed, so as long as students get the answers right, they’re considered ‘passing’. However, that does NOT indicate to me that the kids KNOW their facts, it means they know how to solve a multiplication problem using previously-taught strategies (hello, tallies). The fourth grade teachers will be jumping for joy when it takes three hours for kids to solve 425 x 28.

So of course I chose to time my kids, and it’s ironic that the time element was where I saw the most impressive gains. My class’ average time for solving 50 problems went from 11 min. 40 sec. to 6 min. 50 sec. That’s nowhere near what it should be (2 min. 30 sec., in my opinion) but it’s a heck of a big improvement. I did not see those types of gains when pre- and post-testing for the multiplication rap CD we used earlier in the year, so a) the Rhymes ‘n’ Times approach was more effective than the rap, and b) I don’t attribute the kids’ gains solely to the fact that I dedicated so much class time to multiplication instruction. There is something in the Rhymes ‘n’ Times approach that really resonates with children.

There’s no magic fix to get kids to memorize math facts. It requires motivation, a strong memory, well-developed visualization skills, and the self-discipline to review the answers again and again. Without these skills, the times tables will never be ‘conquered’. That said, Rhymes ‘n’ Times did have a positive impact on my students’ speed and accuracy with multiplication facts.

Have any of you tried Rhymes ‘n’ Times? Do you agree that kids don’t KNOW their facts unless they can recall them quickly, or do you feel that finding the right answer matters more than speed? How do you help students memorize math facts?