Home Articles Breaking up is hard to do: the story of my love affair with Twitter

Breaking up is hard to do: the story of my love affair with Twitter

Breaking up is hard to do: the story of my love affair with Twitter 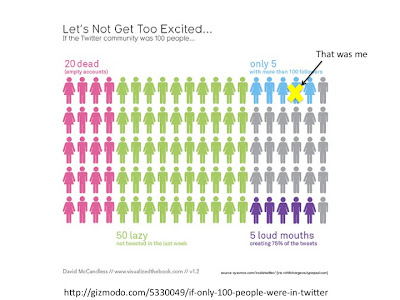 I can officially say that the thrill is gone. It’s been a whirlwind romance this year:

Twitter became my latest social media crush when I joined somewhat hesistantly in January 2009. I promptly earned a social media blogging job because of my post about the experience (which certainly heightened my enthusiasm for the trendy platform) and made some amazing connections at the ASCD conference solely because of Twitter. Those first few months were a time of borderline obsession as I spent a disproportionate amount of time with the object of my affection.

I blogged regretfully about how few of my readers were on Twitter, but this very limitation caused me to discover hundreds of new and interesting people. By now, Twitter was my primary tool for sharing and uncovering important educational news: the infatuation was in full swing, and Twitter was always on my mind.

As the honeymoon drew to a close, the very qualities that once attracted me to Twitter now annoyed me to no end. Though my enthusiasm began to wain as I became disillusioned with Twitter’s flaws, many of you all became tweeters during that time, so I stuck it out. Even my mom joined Twitter this summer. Twitter became that annoying guy who followed me around, and even through I wasn’t really into him, he was too nice for me to ask him to knock it off.

Ugh. I’m now in that painful phase at the end of the relationship where I have to fake interest in anything Twitter has to say, and tuning out its incessant chatter is getting easier because my mind is so preoccupied with ways I can end the relationship without it being too traumatic. In a word, awkward.

I’m certainly not the only one falling out of love with Twitter. And I probably won’t be the only one to hear the classic rebuttal from those still deeply infatuated: “The value of Twitter is in who you follow; if you don’t like the system, it’s because you don’t follow the right people!” But for me, that’s ridiculous. I follow only the people whose tweets are interesting, timely, funny, inspirational, or educational. Usually all of the above.

In fact, it’s the awesomeness of my follow list that causes me to dislike Twitter. It’s simply too difficult to have meaningful conversations and interactions with the people I respect.

When users toss out valuable questions like “How do you integrate technology into your homework assignments?”, followers must respond in 140 characters or less. Tryng 2 figr out how 2 do this=ridic. time consum. &irritatng. Then searching for others’ replies is nearly impossible in the cascading stream of random tweets. Heaven forbid you come into the conversation late and read a whole bunch of @ replies without even knowing the initial conversation starter. The whole @ system is infuriating, especially since you can only reply at a person and not their exact status. Sometimes people @ me about a tweet I sent twelve hours earlier and I have no idea what they’re referencing or how it relates to my most recent tweet, until I finally figure out they’re responding to an older message. If I can’t remember what my own tweet was about, there’s no way I’m going to remember someone else’s when another follower @’s them about it the next day.

Twitter, for me, has become an endless stream of random bits of conversation that I simply don’t have the energy to follow. And don’t even get me started on the hassles of using the #. Seriously, is there not a better way?

There is certainly value for Twitter in the classroom–I don’t disparage that (at least not in this post). And sure, Twitter is a great way to share links to interesting studies, stories, and research. I used to keep Tweetdeck open on the right side of my screen so new tweets would scroll by as I worked on other projects. I could discover dozens of interesting resources in mere minutes. But that just distracted me from the other work I was doing and prolonged my time online. So I started checking Twitter whenever my beloved Google Reader was empty and I felt like reading random information that other people found useful. That would be NEVER.

There is another object of my affection now. You guessed it. Facebook.

I’ve been two-timing Twitter since the beginning, as I joined Twitter the same month I created my Facebook fan page. Yet I have nearly three times as many Facebook fans as I do Twitter followers, which means I’m able to interact with considerably more educators on Facebook. There, I can pose a question, post a status update, or share a photo/video/link that’s embedded right on the page. Fans can reply using multiple sentences with proper spelling in a coherent thread which is simple to read and respond to. Best of all, Facebook is an application that I can check in with a couple times a day for a few minutes at a time, have some meaningful interactions, and get on with my life. I’m able to read and enjoy every single message posted by my fans, people I’m fans of, and my friends.

As long as there are people who want to read my tweets (and evidently there are 400 of them), I’ll login to Twitter once or twice a week to share some interesting links or insights. And I love being able to send messages to influential quasi-celebrities in education and Christian circles to let them know how much I enjoyed their latest book/speaking engagement/podcast. But since I rarely read what anyone else tweets anymore, it’s become largely a one-way conversation, and that renders the whole thing silly and self-indulgent.

If and when Twitter finds a practical way to allow its users to converse, I’ll jump back on the bandwagon. Until then, I’ll spend the majority of my time courting my love that has (so far) stood the test of time. Facebook, how do I love thee? Let me count the ways…

What are your feelings about Twitter right now? Have you found a way to keep it relevant and useful? Or is there another form of social media that’s stolen your heart?