Most of our training as teachers is centered around working with students. But the biggest occupational hazard can sometimes be the adults! Here are five tips for building relationships and establishing a rapport with your coworkers, principal and other administrators, and your students’ parents: 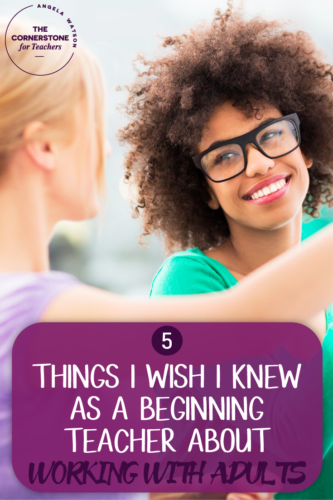 1. Never say anything bad about anyone in the school system, especially during your first year.

When I was in high school, I worked part time at a daycare. My third week there, I went to a woman I viewed as a friend to complain about how rude another teacher was to me. Her response? “Oh, you mean Mrs. Smith? You know that’s my mom, right?” I was mortified, and learned (though not once and for all) to keep my mouth shut.

When you’re new, you don’t know the interpersonal dynamics of the school system yet, and they can be extremely complex. It takes a lot of quiet observation to learn who is friends with whom, who had a falling out years ago and is still bitter, and so on.  It also takes awhile to figure out who is genuinely helpful, since almost everyone you meet will be polite initially.

Remind yourself that you’re still figuring out who has a big mouth or big connections, and be careful about saying anything negative or revealing too much personal information. We are all supposed to be there “for the children”, but it’s naive to think that teachers aren’t human too, and the educational system can be just as cutthroat as the business world. Let your motto be, “If you don’t have something nice to say, don’t say anything at all.”

2. Don’t speak negatively about yourself, either.

The whole school does not need to know about your argument with a parent or the bad behaviors in your classroom. People you don’t know well should see and hear mostly good things about what’s going on in your classroom, because very few people ever get to see for themselves–you will be judged as a good teacher or a bad one based on your reputation. It doesn’t do any good to constantly tell everyone how overwhelmed and exhausted you are.

It’s important to establish a small trust-worthy support system. My advice is to pick one confidante as your mentor and tell only that person your problems. After you’ve been in a school for a few weeks and start to get a feel for your colleagues’ personalities, you can choose someone you feel is trustworthy and confide what you must in him or her. But don’t forget that negativity feeds on itself, and complaining rarely accomplishes anything.  Every workplace has a person who never has anything good to say about anything, and being that person (or around that person) will cause you to burn out, so try to keep the majority of your conversations focused on productive topics.

3. Pick your battles with administration.

If your principal asks you to do something that is too much for you to handle or goes against what you believe is appropriate for your class, think very carefully about how to handle the situation. Sometimes your best option is to nod your head and then “close your door and teach”, as the saying goes. If you openly resist every mandate that is passed down, you will be unhappy a lot and viewed as difficult.  Speak up only on the things that you MUST.

I usually tried see my principal no more than once or twice a year, at most, with problems. When I saw him or her in the hallway or in meetings, I tried to be cheerful, friendly, and positive (rather than answering questions like “How are you?” with a joking “Ughh–how many more days left before break?”) My hope was that this gave me the reputation of being easygoing and cooperative. Then, when something was really bothering me, my principal was much more likely to take me seriously because she or he knew that I didn’t complain about much.

4. Accomodate students’ parents as much as possible.

As a new teacher, I was repeatedly advised to do just the opposite: I was told to draw a firm line in the sand with students’ parents and let them know I called the shots and knew what was best because I was the expert. Over the years, I realized that was not the type of relationship I wanted to foster. Most of the time, parents and teachers want the same thing–what’s best for the child–so if you approach conflicts with that mindset, it’s much easier to find a solution. Even when I’m unable to accomodate parents’ requests, I try to make sure they end the discussion with the feeling that they were heard and their opinions were validated.

Do everything you can to contribute to a good working relationship with your students’ parents–thinking that you don’t have the time or energy to do this is really shooting yourself in the foot. Learn which parents want updates on everything, and be sure to keep them in the loop as much as possible.  If you know you are going to get a phone call later about something, head them off at the pass with a note or phone call to explain your side of the story before any misunderstandings occur. Show grace to parents who are less involved and be kind and welcoming when they do make an effort to support their kids’ education.

And as a side note: come to terms with the fact that you will not be able to please some parents no matter what.  I used to beat myself up about it, thinking if only I was a better teacher, all the parents would like me. It took me years to figure out that it’s pretty normal for teachers have at least one parent every year who cusses at them, or goes over their head to the principal, or disrespects them in a myriad of subtle or not-so-subtle ways. Be prepared and don’t take it personally! This happens to EVERY teacher, whether or not they tell the world about it (remember tip #2?) Do your best and remind yourself–it’s only for ten months. You can handle anything for ten months.

I kept horrible records my first year of teaching, which resulted in several uncomfortable parent confrontations, insufficient anecdotes during special ed referral meetings, and constant self-questioning as I tried to remember little details about every aspect of my job.  I learned to keep a file on each child in my classroom and put EVERY note from home inside, even the insignificant ones like early dismissal notifications. I tried to type my responses to parents so I could keep a copy for my files. And whenever approaching a potentially controversial subject (such as grades, attendance, or behavior), I sent a copy of the note to my principal to initial first.  This way, the note held more weight with the parent, and if the parent decided to go over my head about it anyway, I knew I was in the clear because the principal already had a heads up .

Keeping detailed lesson plans is more important in some schools than in others, but I think it’s safe to say that every teacher should be familiar with the learning standards and feel confident about the evidence that his or her lessons are aligned with them. It’s also good to have a paper trail for your differentiation methods: reading group lessons, above-grade-level student contracts for independent study, anecdotal records for kids with IEPs, etc. Talk with a colleague you respect about how these types of documentation are handled in your school and what you can do to make it easier on yourself.

Documentation for students learning is important, too. Have students fill out missing work forms to justify your homework and classwork grades–you will be able to show parents exactly what was not done, when, and why, in the child’s own words. Photocopy low test scores and poor/ incomplete classwork samples before sending them home for students that you think will get below a C on their report cards, just in case the evidence “disappears” between school and home. Be sure to send out progress reports midway into the quarter so parents aren’t shocked and have time to intervene–there’s nothing worse than a parent finding out their child is failing after it’s too late to do anything about it. Keep your documentation through the following school year in case the next teacher needs them or a liability issue arises (you never know what you will be held accountable for, or when.)

You don’t have to stress out about documentation, just get in the routine of keeping good records.  Refrain from making comments such as, “My desk is always such a mess” and “I can never find anything”, and really have your stuff together for parents at Back to School Night–you will develop a reputation for being well-organized and people will be far less likely to question you.

What are your thoughts–is my advice too jaded or cynical? What do you wish someone had someone had told YOU about getting along with colleagues, administrators, and parents when you were new to teaching?

How YOU can build a positive school culture, no matter where you teach